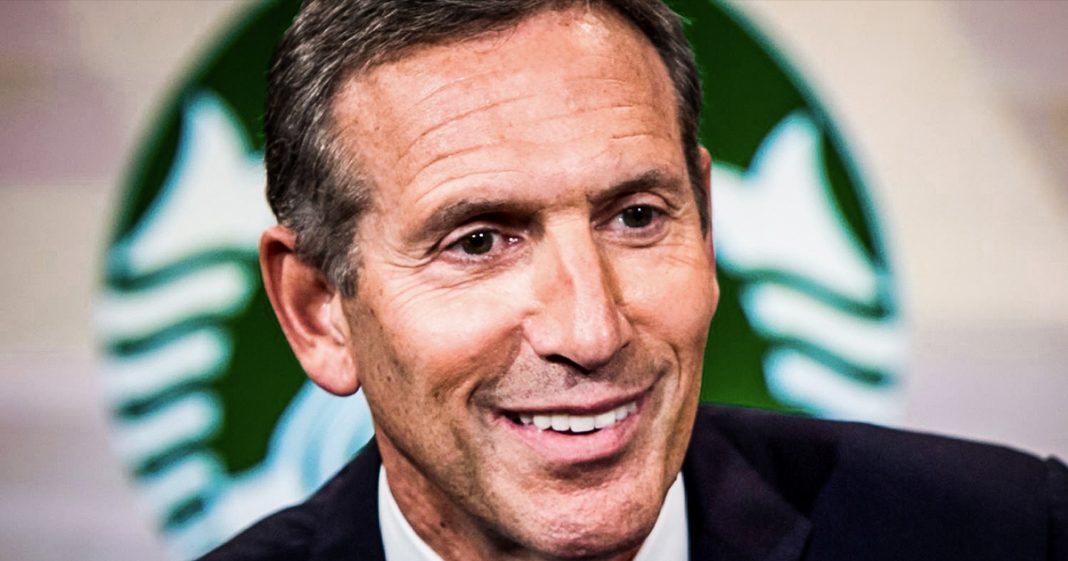 Former Starbucks CEO Howard Schultz has made headlines all week after he announced his interest in running for President, but the American public isn’t too happy about it. In fact, most people are sick and tired of billionaires like Schultz who want to take away our privileges and safety nets while hoarding billions of dollars in cash for themselves, but that is EXACTLY what Schultz’s platform is shaping up to be. Ring of Fire’s Farron Cousins discusses this.

So for the last week or so, everybody’s been talking about the fact that Howard Schultz, the former CEO of starbucks, billionaire worth more than $30,000,000,000, I think a is going to swoop in and save us all. Howard Schultz was brave enough and responsible enough to say that he wants to run for president. He’s hired Steve Schmidt, John Mccain’s 2008 campaign manager, just to give you a hint of how effective that guy is. He’s hired him to run this campaign and Howard Schultz promises that he is going to rescue us all because as a self made billionaire, he knows exactly what the American public wants and according to shults himself, what the public wants is don’t raise taxes on me and my fellow millionaires and billionaires. Let’s cut entitlement programs to let’s, let’s cut social security and Medicare because obviously, yeah, that’s what people want a medicare for all is, is a huge threat to democracy.

So we won’t even pursue that. Let’s not even talk about it. According to Sholtz and of course the budget deficit, the national debt, that is the greatest threat to the United States that exist today. I mean, I’m sure you understand that, right? I mean everybody, you talk to your friends, you texting with each other. It’s all about the national debt, right? That’s the only conversation we’re having. That’s the only issue any of us have ever really cared about. You know, screw healthcare, screw medicare for all, screw the fact that he wants to take your grandparents and your parents and cut their entitlements that they’re trying to live off of, to have some kind of a meager retirement. No, we’ve all been worried about the national debt at $21,000,000,000,000. Oh God. It’s awful. What are we gonna do? We’re gonna do the same thing we’ve always done as a country. It just kind of keep going forward. Sometimes you pay it down. Sometimes we add to it. That’s what happens. Everything works out fine. I am sick and tired of billionaires. I’m tired of it. I am tired of these egotistical, narcissistic assholes coming in telling us that they’re going to take stuff away from us

because hell, they made it. They made it to the billionaire’s club. They’ve got everything in the world they could possibly need, plus a few billion dollars to spare, and yet we the people living paycheck to paycheck, struggling to get by struggling every time we have to walk into a pharmacy and pick up a new prescription, wondering how much that’s going to set us back and how much we’re going to have to save over the next week or so because we had to blow that money on insulin or asthma inhalers on or on Epi pens. Yeah. We’re the ones who are being selfish and greedy right now. Not The guy hoarding $34,000,000,000 in a bank somewhere. He’s our savior. Nobody. Nobody wants billionaires telling us how to live our lives. Nobody wants billionaire in the White House telling us that they know best and nobody wants another billionaire vanity project to be successful enough to get another idiot in the White House who doesn’t know what the hell he is doing. But that is exactly what Howard Schultz is. Another idiotic billionaire who was more than happy to take everything he can out of the system and then try to screw over the rest of us who are struggling to live paycheck to paycheck.