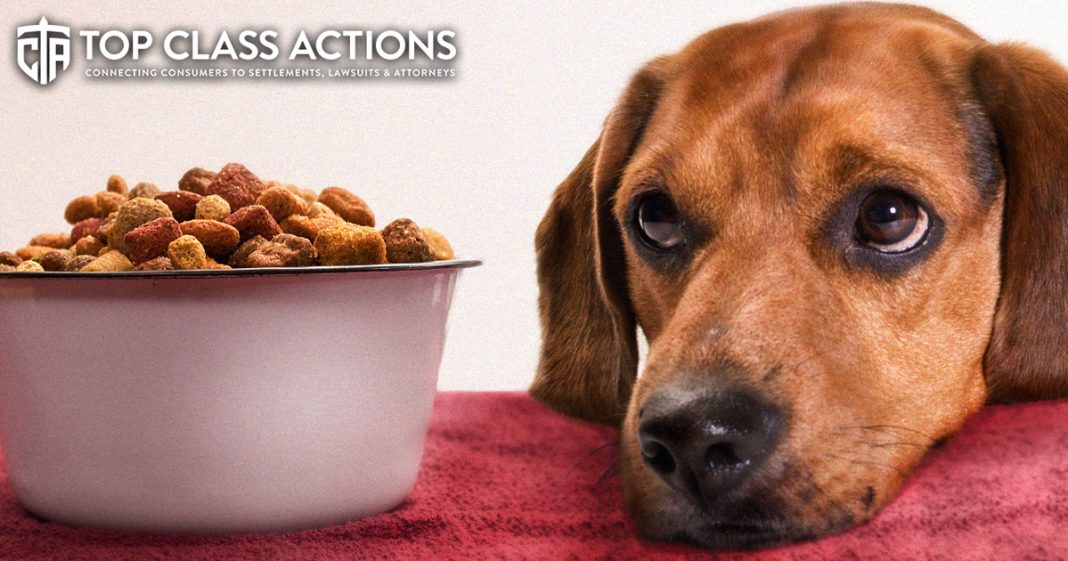 Take care of them, feed them food that is all natural, and so we’ve been spending more and more money each year buying these so called all natural pet foods. But according to a new class action lawsuit, these dog foods may not be as all natural as they claim to be. Joining me now to talk about this as Scott Hardy from topclassactions.com. Scott, Nature’s Recipe pet food. They market themselves as all natural. A new lawsuit is saying that that is not the case. Explain what’s going on with this.

Sodium tripolyphosphate or I’m sorry, tripolyphosphate STPP, synthetic vitamins and synthetic minerals. And so instead of giving your dog all natural wholesome dog food, which you know, if there are no fillers in there, it’s great. You’re, you’re expecting that you’re going to be giving these guys and your puppy’s just fantastic food and in fact, it isn’t all natural. Just like companies are getting caught when they’re trying to pitch these all natural products to consumers and humans.

Farron Cousins:                  And what’s really interesting about this is, you know, it’s not like these are necessarily, now we may find out differently later on, but as far as we know right now, these are not necessarily things that are going to be harmful to the pet. It’s just that the product is labeled one way. The ingredients are a completely different story. So people made a choice based on what that label and what the commercials were telling us that this is better, that it doesn’t have any synthetic ingredients and that’s actually what the plaintiffs in this class action say.

They say, listen, if I would’ve known that this dog food contained synthetic or manmade ingredients, I probably would have bought something else or I wouldn’t have been willing to pay a premium price for it. I would have paid a regular price or, or you know, consumer demand would have warranted a regular price for these products, but you slap that all natural label sticker on there and suddenly you can jack up your prices $3, $4, $5 per bag or can of food and people say, wow.

It says all natural, look how expensive it is. This stuff must be great and I want to take care of, of cinnamon over here and make sure that she is perfectly safe and that’s what they do. And that’s what the plaintiff said. This is what we did and there’s countless people all throughout this country who would do the same thing because we want to take care of our pets. But we also don’t want to be misled by these corporations.

Scott Hardy:                          Exactly. Because no one’s saying that this dog food is unhealthy. No one’s saying it’s bad for their dogs and that’s, I’m very happy about, that’s super important to note here. Nature’s Recipe is not accused of any malfeasance when it comes to giving pets something that’s unhealthy. This is strictly a labeling class action, where they very likely should have called out on their labels, we are all natural except for some of the vitamins, minerals, and preservatives we use to keep our dog food fresh., And if they add that labeling to their dog food packages, you know that will probably be part of any class action settlement that takes place.

But when you say that your dog food is all natural, you don’t call out the potentially synthetic ingredients within it, but you will charge people. You charge people a premium for this dog food, you are going to get called on it eventually and that’s what’s happened here. So that’s why, you know, I’m not saying don’t buy Nature’s Recipe dog food. By all means, if you feed this to your pets, there’s nothing that says it’s unsafe. Nothing says it’s, it’s not the right thing to do, but just save the receipts because you might be able to get some cash back from Nature’s Recipe if this settles.

Farron Cousins:                  And hopefully in the very near future if this is the food that your pet prefers, if it’s what they love. I know a lot of pets out there, they do not like changing foods, so rest assured that if this class action is successful, we will likely in addition to labeling changes and a settlement could also be seeing a price drop in the near future once this company is no longer able to charge this premium. That, that’s a big maybe, but it is something that could be on the horizon.

Farron Cousins:                  We can, we can dream, right? We can hope that maybe this company would do the right thing even though history is 100 percent against me on that. I would like to think that eventually we’re going to see a company do the correct thing, but nonetheless, there are more information available in the description of this video. Just follow the link there. It’ll take you to topclassactions.com. You can find out about this particular class action and countless others happening to countless corporations here in the United States.

A lot of which you may actually qualify for, so I encourage everyone sign up for the top class actions.com newsletter because you would be shocked at how many class actions are taking place in this country at any given time that you likely qualify for. Scott Hardy from topclassactions.com. Thank you very much for talking with us today.