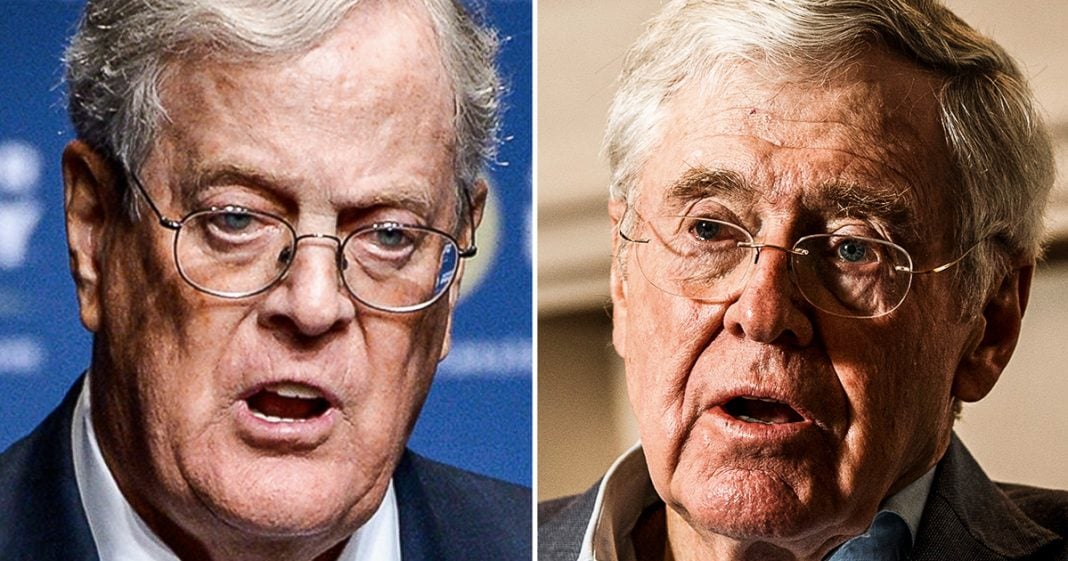 At a Koch Brothers retreat this past weekend, the wealthy brothers and their cohorts revealed their new plans to help make the United States a better place by investing in education and anti-poverty measures. There was apparently no real discussion of politics and who they will be supporting as the 2020 race gets underway. Don’t buy into it – the Kochs are trying to reframe their life stories before its too late, but the damage they’ve done to this country can’t be undone with a few checks. Ring of Fire’s Farron Cousins discusses this.

This past weekend, the Koch brothers had their infamous Koch brothers retreat where they brought in their leaders, their friends, everybody from the libertarian conservative movement in the business world to talk about what exactly they’re going to do in the year ahead and according to a report in the Washington Post, one of the things that really wasn’t talked about at this meeting very much was politics. Now, in the past, these meetings had been 100 percent about which politician are we going to buy? Who are we going to pay to run against a person we hate? What elections are we going to swing? What local elections? Where do we want to frack? Who can we pay off there? That’s essentially what these coke retreats and Ben, but according to the Washington Post, not this time, this time, they talked about the big coke brothers rebrand and what they’re trying to do to basically save their legacy.

Before both of those elderly men dropped dead, and here it is. They’re going to start putting money into antipoverty measures. They’re gonna. They’re gonna work on a reentry programs for former convicts were going to help education. We’re going to fund education, we’re going to be the coke saviors, not just the Koch brothers. We’re here to rescue America and stop the rampant poverty and help the convicted criminals who can’t find jobs. We’re going to look out for them because nobody else is raw. So gonna help education and give them lots of money, you know, kind of like we do already in pe colleges to teach libertarian economic talking points and teach school districts to tell children that climate change isn’t real. I don’t for one second by this stupid little coke brothers rebrand and neither should you. These are elderly men, one of whom might actually be on his deathbed, David, because he actually resigned as the head of this little coke organization last year because of his failing health.

His brother Charles comes in and Washington Post tells us that these new goals are more in line with Charles is a, you know, ideology. Since when, when the hell has any koch brother come out and said, you know what, dammit, we have got to do something about these children living in poverty. We’ve got to do something about our failing schools. We have got to do something about these people who’ve served their time and now they can’t get jobs because of their criminal record. Literally never, literally, never in their miserable, disgusting lives have the Koch Brothers ever given a damn about anyone other than themselves. So this whole story, this whole meeting they had, if this is actually what happened, is complete bs but never fear, as I said, they didn’t completely talk about politics, but they also didn’t completely ignore it because they’ve also said that Americans for prosperity, that’s their little group, they a fund that goes out there and funds right wing and Libertarian politicians to help destroy democracy.

Um, they said that they will still use it as a grassroots network of volunteers to support candidates for the Senate, the house governorships. Uh, and they’ve also pushed for Anti Union and pro charter school initiatives at the state level. Um, and so maybe, maybe they will do that. Maybe they won’t do that anymore. They haven’t decided yet, but they still hate unions. They hate public schools. And yet we’re supposed to believe that they want to invest in education. Nothing about this story makes sense and I can promise you the Koch brothers are not going to go out there. They’re not going to send their army of lemmings out there to make the world a better place. They have been working for decades to help give us what we have today, a dumbed down federal government. Thanks mostly to the tea party, a climate of deregulation and an actual climate that is killing people through climate change. That is going to be the legacy of the Koch brothers. They may get their name on a public school if they give, you know, $100,000 here, $100,000 there. But I hope history remembers who these idiots truly were. They aren’t the people who came in and did their, uh, use their money to do good things there. The people who came into our political system gave millions upon millions of dollars and help destroy what America had been building for centuries.