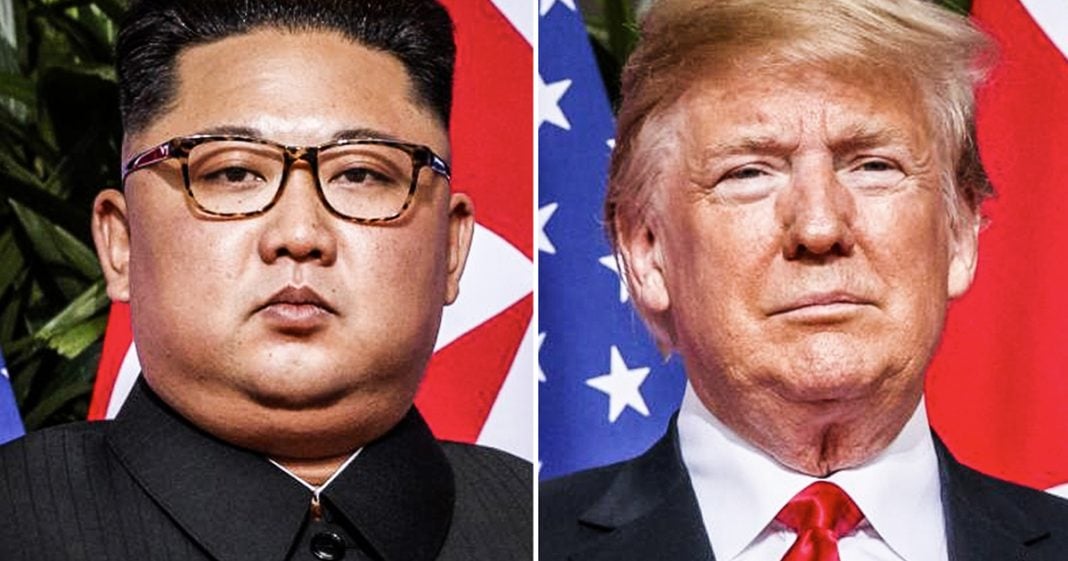 Donald Trump insists that things are going great with North Korea, and that he’s very close to getting the country to give up their nuclear ambitions. But Intelligence Officials within the administration told Congress this week that nothing could be further from the truth. And it isn’t just North Korea that the President is getting wrong – they say that he’s also wrong about Iran and Syria. Ring of Fire’s Farron Cousins discusses this.

Yesterday, members of the intelligence community submitted their written assessments on the basically the state of the world, right? We had Dan Coats, the director of national intelligence, basically the highest of the highest up and our intelligence communities. He had to submit his written statement about, you know, what threats are out there against the United States, how are things going with our negotiations with other countries in terms of security issues? What’s really happening out there? Dan Coats and coats in his written statement to the Senate, basically told us that Donald Trump is 100 percent wrong about every foreign policy issue that he is talking about. Specifically coats called him out, as did the heads of the CIA, DIA, NSA, about North Korea. They said, this guy has no idea. We do not believe that North Korea is denuclearized even though Donald Trump has said that repeatedly and recent tweets, he said that things are going great.

He’s made so much progress with them, and then the leaders of our intelligence communities came up and said, uh, he hasn’t done anything. In fact, we think that North Korea, we have evidence, satellite photos and all of that, that shows that they’re actually increasing their nuclear ambitions. So literally everything Trump says, the opposite of that has happened. They say this same thing about Syria in their written assessment. You know, Trump funtown us, we, we, we defeated Isis in Syria. We’re done. We did it. They’re gone. We’re defeating them all over the Middle East intelligence community says, yeah, that didn’t happen. Other countries have also said, yeah, that’s not the case. They’re still there. They’re not close to being depleted. What the hell are you talking about, Mr Trump. But here’s the thing. And they also said he’s been totally wrong about Iran as well, which we all know that John Bolton before he, uh, you know, got his eyes on Venezuela, was hell bent on attacking Iran, but at least now you know, maybe we’ll have a war a little bit closer to home.

I’m all for keeping all options on the table, not militarily, but humanitarian. You know, sanctions. If we need them to humanitarian aid, if they need that, whatever we can do to avoid any kind of armed conflict with them. I own in favor of if Trump needs to sit down with Kim a few more times and talk to them, then go for it, but don’t expect that to change anything because this whole regime in North Korea has been doing this for over a decade and nothing has changed. If we want them to d nuke and I’ve said this many times and I’ll continue saying it, then we have to do the same thing. We can’t sit here holding onto the most powerful weapons man has ever made and look at other people and say, you can’t have these. Get rid of yours. I can be the only one holding this thing.

That’s not how it works. That’s not how it’s ever going to work. We want others to d nuke, we have to lead by example and I am 100 percent in favor of that. And as for the situation in Iran, we were actually making progress with that until the president decided to come in, take us out of the treaty that we essentially started and then say that, ah, they’re making nuclear weapons. We need to go bomb them. Yeah. None of that has happened, but they still are treating this country like they weren’t adhering to the agreement when in fact they were. We are the ones who didn’t. Donald Trump doesn’t understand foreign policy. He doesn’t understand what’s happening in the world, and that is incredibly dangerous for the president of the United States to not even know what the hell he’s talking about.