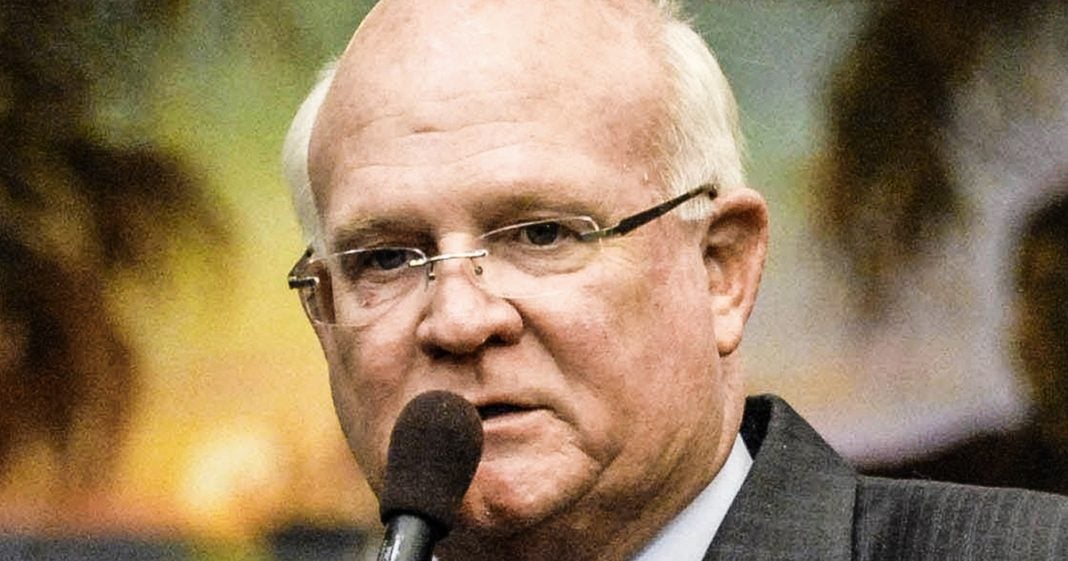 A small group of Republican lawmakers in Florida have introduced legislation that would force schools to teach “alternatives” to important issues like climate change and evolution. Believe it or not, these bills actually have a strong chance of becoming law in Florida, thanks to the Republican Party’s stranglehold on the state. Ring of Fire’s Farron Cousins discusses this.

A group of Republican lawmakers in the state of Florida have put forward legislation that would make school districts teach what they call alternatives to things like climate change and evolution. The legislation is being pushed mainly by a state senator by the name of Dennis Baxley, who, uh, if you’re not familiar with Florida politics, he’s also the guy that gave us the stand your ground law back in 2005. Uh, he’s done a lot of horrible things during his time in office and now he is trying to tell us through his legislation that these controversial topics like manmade climate change, uh, yeah, we’ve got to teach the alternative to that as well. So to that, to this legislation, I have to ask a Baxley here. What’s the alternative to manmade climate change? Death by flooding, death by fire, death by hurricane. Because those are really the alternatives to not understanding and learning about climate change.

That’s what we’re looking at here. Is that what you want to teach kids like, no, no, no, no, no. Don’t worry about that. Just worry about how to hunker down. The next time a super storm comes in, slams into our state, which pretty much happens every single year. Somewhere in the state of Florida. This man is absolutely insane. Dennis Baxley, republican state senator for the State of Florida is a complete nut job if he thinks we need to be teaching our kids alternatives to climate change. Now, evolution also absolutely ridiculous to want to teach an alternative to that. That is considered a scientific fact, but evolution has been the Republicans boogeyman in public school for about a hundred years now, so that’s to be expected, but we’re talking about a state that at current projections will be mostly underwater within the next 100 years, 100 years. I know Baxley won’t be around at that point, but there are residents of the state of Florida right now who might be in Baxley, doesn’t want to teach them about climate change and this whole thing is actually being pushed by this group here.

The Florida citizens alliance now. They have been working for several years in our state to a kind of screw up the curriculum of public schools. Now they claim that this grassroots organization, 20,000 people, uh, you know, we just want kids to learn better. We want school districts, they actually push this bill back in the fall. We want parents to be able to challenge school districts about their textbooks and if enough parents object, they have to change the textbooks. That’s something that they pushed for and got passed. So to be honest, I feel like this alternative climate change teaching thing, we’ll also past, we’re a state that is completely run by idiotic Republicans who would rather keep us stupid then give us a proper education. But nonetheless, this Florida citizens alliance has received aid from the heartland institute. It’s received aid from the Koch brothers and oil industry. So yeah, no wonder they don’t want us to learn about climate change because God forbid, we ask who’s responsible for it. And it would turn out to be the same people who are providing material aid for this Florida citizens alliance. And of course our republican state Senator Dennis Baxley himself. These people want to keep us ignorant about the issue because the people paying their bills are the ones who caused the crisis to begin with.