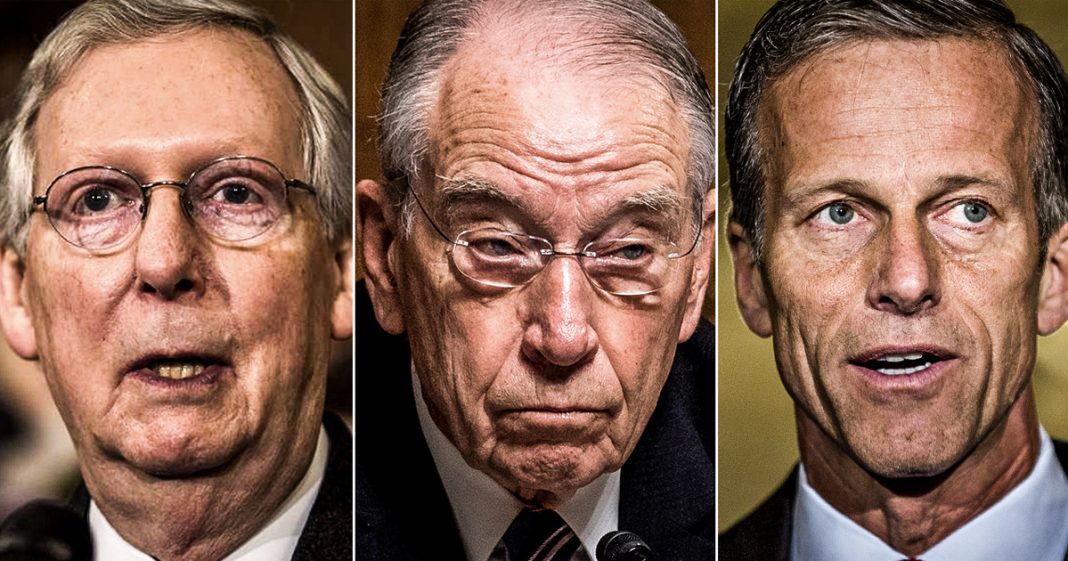 Senate Republicans, apparently oblivious to public polling data, have decided that the best thing they can do right now is to give the wealthy elite ANOTHER tax break by repealing the Estate Tax. This is a tax that only applies to about 2,000 families in this country, most of whom already have more money than they could ever hope to spend. Ring of Fire’s Farron Cousins explains how this move shows that the GOP is completely braindead.

The Republican Party is trying to prove to us once and for all that they are completely brain dead. Three Republican senator, senators, top Republican senators. You’ve got Mitch Mcconnell, Charles Grassley and John Thune are actually working right now on legislation to completely abolish the estate tax. What Republicans called the death tax. And in case you’re not familiar with it, that is the tax that you pay on inheritance that you receive. Now in the tax cut that was passed in at the end of 2017, they already reduced the estate tax. You know, they, they took a big knife to that. So now if you inherit a $22, million dollars or less, you don’t pay any taxes on that, but if it’s more than $22, million, Eh, you’re going to have to pay some taxes. Unfortunately they want to get rid of that. They want to say that, hell, if you inherit $23, million dollars or $500, million or $2,000,000,000, you don’t owe the government anything on that.

That’s your money now because it was already taxed when whoever earned it earned. It makes it a little bit of sense, right, but then again, the person just getting the money, they didn’t pay taxes on it, they didn’t earn that money in any way other than being, you know, lucky to be related to somebody. So yeah, they should still pay taxes on it. But the bottom line is this, the Republican Party is trying to cut taxes for the wealthy. Again, poor people will not benefit from this tax cut. Poor people are not affected by the estate tax. Estate tax could be 100 percent and most of us would never even have to think about it throughout our entire lives. Nor would our children or our children’s children. Unfortunately less than 2000 families in the United States would benefit from the repeal of the estate tax. I think the number’s about 1700 families who would benefit from repealing the estate tax and all of them are millionaires.

All of them, all of them. There is no trying to hide what this particular tax cut is about. You know, they tried to sell us the other tax cuts as, oh, it’s going to trickle down. You’re all totally going to get this. There’s none of that here. There’s none of that here. This is just we want to give wealthy people more money and we want to make sure that their kids who have been lazy lumps their whole life, these little inheritance babies, we want to make sure they don’t have to pay anything on that money so they can keep giving it to our campaigns because that’s what this is about, right? That’s what it’s always about. The American public by overwhelming margins wants taxes raised on the wealthiest in this country and that actually includes Republicans. Republicans want that to happen. We’re at a time right now, we’re Democratic candidates are running on platforms that say we’re going to tax the wealthy more and the public loves it. Polling data proves that again, Democrats and Republicans want higher taxes for the wealthy,

and here we have a Republican party that so tone deaf, so brain dead that they’re still trying to cut taxes for the wealthy. Good luck with that, by the way, because right now the American public is pissed off at the top. One percent at the wealthy elite at levels that we haven’t seen since occupy Wall Street was first formed, so if you think that it’s a smart idea to go ahead and make one of your final acts in the Senate, repealing the death tax so that 1700 millionaire families don’t have to pay taxes. Then again, good luck with that and enjoy your final term in the US Senate.