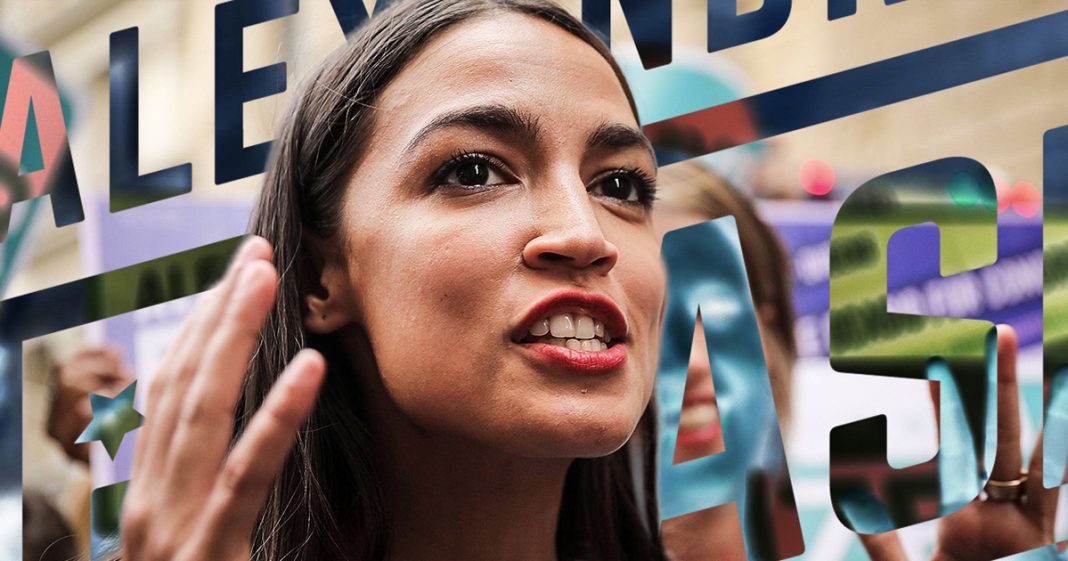 A headline from The Hill declared that Democrats are working to draft New York officials to primary Representative Alexandria Ocasio-Cortez in 2020, but the article only mentions a single Democrat that refused to give their name. The title was certainly click-baitey, and Democrats would be foolish to try to remove one of the most inspiring politicians in office today. Ring of Fire’s Farron Cousins discusses this.

So yesterday the hill published an article with an incredibly misleading headline. The headline on the article was some Dems float idea of primary challenge for Ocasio-Cortez, and then in the third paragraph of this article, they say, you know, the Democratic lawmaker who requested anonymity. So one democratic lawmaker allegedly from the House of Representatives who refuses to give their name to the hill warranted the headline. Some Dems float primary challenge for Ocasio-Cortez. Now here’s the thing, the article does go on to say that this unnamed Democrat, this mystery primary, a creator says that we’ve got council people in the Bronx who have been waiting 20 years to serve in the seat as if these people are somehow owed a seat in the US House of Representatives. Okay? Unnamed Democrat. That’s not how it works, but nonetheless, you know the hill is, is out there promoting this article as if, Whoa, God, there’s some kind of turmoil, some kind of tension.

Look at what’s happening. Click on our title because you want to know who these Dems are. It was a totally clickbait thing to do. That may or may not have any basis in reality, and here’s the thing, I don’t think the Democratic Party is crazy enough or stupid enough right now to already be thinking about challenging Ocasio-Cortez in a primary, considering the fact that she has already come in here disrupted the way the system even works, pushed people further to the left is promoting ideas that are overwhelmingly popular with a majority of people in the United States. So why would you already less than one month into her term be thinking about challenging her in a primary. That makes zero sense even for the Democrats. So I don’t even think that’s something that they have actually talked about. Yes, she’s ruffled some feathers. She’s made the wealthy elite a little nervous, you know, she’s made the establishment nervous, but I do not think that they would be foolish enough to primary her, but even if they did go for it, her own campaign has admitted, you know, what?

We of all people aren’t going to object to a primary challenge. That’s how we got this position. We welcome any challenges, uh, in primaries for us, for anybody else. Bring it, the more the merrier. And they’re not saying it as a uh, you know, like, oh, come. Yeah, yeah, we’ll take you on her primary. It’s no, get more people involved in politics. That is a good thing. And it is. So if the Democratic Party does choose to primary her in 2020, you know, a year and a half away, so be it, that’s what happens. But the article goes on to state that allegedly the establishment is upset with her because she has floated the idea along with the Justice Democrats have primary Hakeem Jeffries. And that’s not true. That’s simply not true. There’s no record of them saying this. That’s not a thing that has happened. And yet allegedly according to the hill, the establishment is mad at Justice Democrats and Ocasio-Cortez for saying something that they didn’t actually ever say the hill totally blew it here.

And I know a lot of people on twitter have actually been talking about the fact that, well, the hills garbage, it’s horrible anyway. No, I mean the hill does a lot of good things. They get a lot of things right, but on this particular one, and there have been many others, don’t get me wrong, everybody screws up, but the hill really missed the mark here. They tried to create this clickbait story. They tried to get Democrats all energized, maybe tried to create that riff to make it a little bit bigger, but the reality couldn’t be further from the truth. There is no real evidence right now to suggest that any Democrats are considering finding somebody to primary Ocasio-Cortez, and even if they did, that’s kind of the goal here, right? We want people to be primaried. We want them to be challenged. We don’t want anyone to become complacent because the second, any, uh, any politician from any party becomes complacent. That is the moment when they stopped caring what their constituency actually want. The way to prevent that is through strong primary challenges.