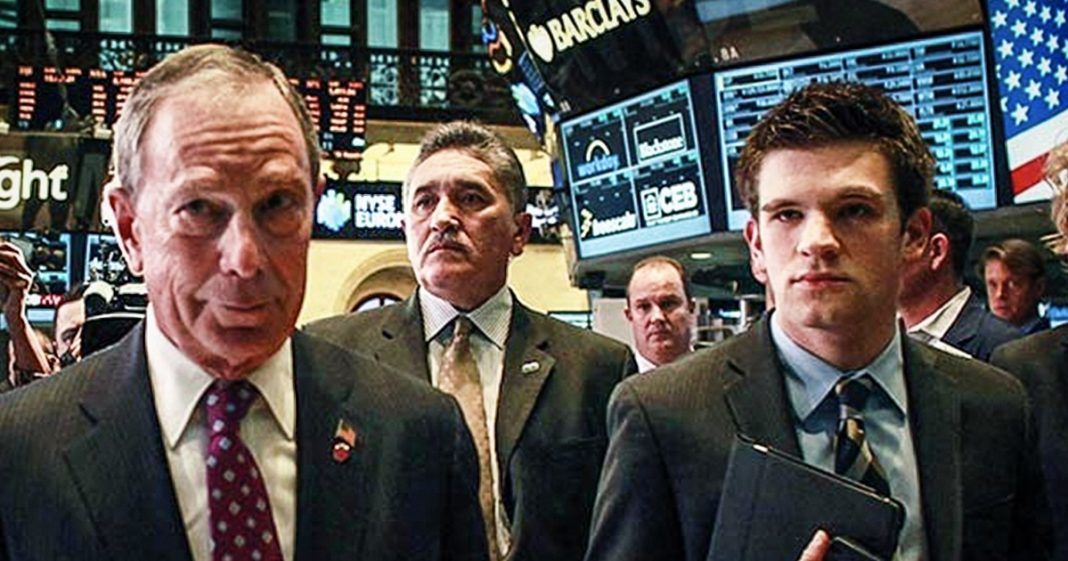 Wall Street traders, hedge fund managers, and virtually the entire crop of people who devoted their lives to chasing dollars are freaking out right now as they have no one to turn to in order to preserve their corrupt ways. They can’t rely on Republicans because their policies (like the government shutdown) have harmed their profits, but the Democrats and the public are calling for higher taxes on the wealthy. Wall Street is finally starting to feel the same kind of squeeze that they have put on the public for decades. Ring of Fire’s Farron Cousins discusses this.

It can’t be worn and it can’t be sanders. It has to be someone centrist and someone who can win. That is what an unnamed CEO from a giant bank here in the United States. The bank was also a name that is what they had to say recently. Can’t be worn and it can’t be. Bernie got to be a centrist. Here’s what’s happening on Wall Street and in business rooms all across this country right now. The wealthy elite are freaking out. They’re freaking out because as of right now, they have nobody to turn to. They have nobody to coddle them. Nobody to give them everything they have ever wanted, which pretty much they already have because here’s the problem and this is what they’re ready to admit. They like Donald Trump, they liked the tax cuts they’ve got. They love the deregulation so they can just get away with whatever, but he’s completely unpredictable and his temper tantrums have caused the market to go down and back up and then way down and then slightly back up.

His government shut down, just cost the economy. $11,000,000,000. They’re tired of it. In spite of the tax cuts, they’re sometimes losing money over this guy. Businesses as a result of the trade wars are losing money and they’re sick and tired of it so they don’t want Trump anymore, but then on the other side, oh, that’s the scary part for them because if you don’t back Trump, who are you going to back? Well, it can’t be worn and it can’t be Bernie because those guys, Elizabeth Warren, Bernie Sanders and a whole crop, other Democratic candidates, they actually want to increase regulation because they understand that that’s how we protect American consumers. They want to raise taxes on people making more than $10,000,000 a year or $500, million dollars a year or more than a billion dollars a year. Elizabeth Warren has done a phenomenal job of actually releasing her plan on how she would do that.

Representative of Kazuyo Cortez is out here talking about a 70 percent marginal tax rate. That’s freaking the hell out of wall streeters. They have nowhere to go. They don’t know who to back. In fact, according to a recent article in politico, they’re actually praying that Mike Bloomberg, a centrist who’s going to push for deregulation tax cuts, you know, no real changes for the business world, no oversight. They want him to run because he’s also not volatile enough like Donald Trump to just tank the stock market with a single tweet. Will Bloomberg’s not going to do that? Maybe they’ll back this schultes guy, the founder of starbucks, but who knows, but right now wall streeters are terrified because they’ve got nobody to protect him at the moment. But here’s the thing, they’re kind of feeling the squeeze right now and that’s good because that’s the same squeeze that they have put on the American public for decades.

You know, when they had those accidental foreclosures that they ended up blaming on a computer glitch, but people still lost their homes and they didn’t give a damn. You know, when they took our investments are are our pensions mom and pop investments savings. They’ve been saving up their entire lives and decided to gamble it them all away. That led to the meltdown in 2007, 2008. Those people never made whole again. Never got their money back, will now be working until they die with those ceos are doing great. They are making more money than ever and they don’t want that to change. They don’t want to be held accountable, but they have squeezed the life out of too many people in this country. So if they’re running around terrified because either Trump’s going to tank, the market or Democrats are going to tax them more than I say, hell yeah, and to be perfectly honest with you, this quote that I started with, it can’t be worn and it can’t be Bernie. To me that says that it has to be worn or it has to be Bernie, one of those two because according to the bankers themselves, those are the only two candidates right now that are actually going to hold them accountable for their constant and rampant and disgusting corruption.