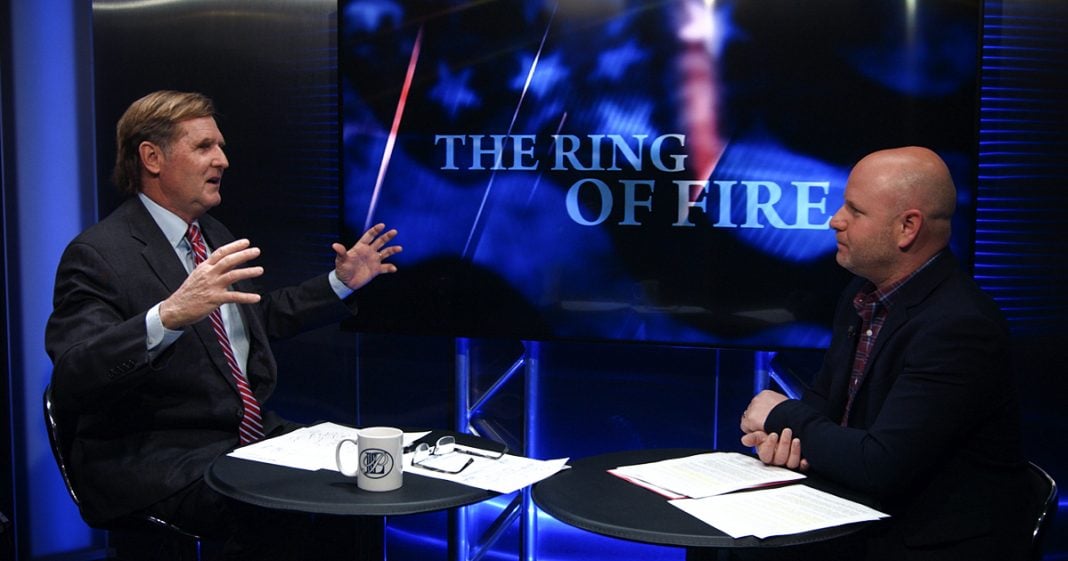 A group of generic drug manufacturers have been busted working together to drive up the cost of generic drugs in the US. This “cartel” used special coded language to help each other keep their plans secret, but a lengthy investigation uncovered all of their dirty tricks. Ring of Fire’s Mike Papantonio and Farron Cousins explain what happened.

Mike Papantonio:             A group of generic drug manufacturers have been busted working together to drive up the cost of generic drugs in the United States. The cartel, and it is purely a drug cartel, used special coded language. As a matter of fact, they had their own lingo to help each other keep and plan secret meetings about how they can affect the prices of drugs. When I first saw this story, I had to reread the first few paragraphs a few times because it seems so improbable that you have these, these CEOs that are meeting in what they called girls night out.

Now everybody around the table understands, we all have to have our fair share. What that is, that’s code for let’s all raise the prices together. The other part of the lingo is Joe seems to be wanting to trash the market. That’s part of, trashing the market as part of the lingo. Joe wants to do the right thing and that’s treat generics like generics. Pick it up from there.

Farron Cousins:                  The one that stood out to me the most was the, the sandbox. The sandbox is were all these generic drug makers go to play and by play they mean, sell our drugs. And the fair share applies to the sandbox because it says, okay, in this particular city there’s two CVSs. There’s two Walgreens. There’s two Rite Aids. So me, you know, I’m president of company A, I’m gonna take all the CVS. You company B, you get the Walgreens. Company C, you take the Ride Aids, the Ready Marts, you know, the smaller ones. But that’s everybody’s fair share.

So CVS can only offer my prescription drug. You have a competitive drug, but we’re not gonna sell them in the same store because that’ll drive down the prices. So anybody who goes to Walgreens gets your drugs, they go to CVS, they get my drugs, that’s fair share, and they colluded to prevent one another from, from overstepping their lines in the sandbox to keep those prices artificially high to the tune of $4,000 or $5,000, $6,000 markups on generic drugs.

Mike Papantonio:             Okay. So, and the whole notion of generic, if you think about it, the only reason generic was, has gotten by they, they’ve avoided so many pitfalls. You can’t even sue a generic company the same way that you can sue the original manufacturer. There’s all kinds of road problems getting to even sue a generic company. But the generic company said, well, we want this special treatment because we’re different. We have lower prices. We can keep the market down. That was their big sale. So now we find that what’s interesting about this, these are old drugs, Farron.

Mike Papantonio:             These aren’t new drugs where they’re saying, well, research and development has changed. That’s ridiculous talk. These are drugs that have been on the market for 10, 15 years.

Farron Cousins:                  Albuterol for asthma, EpiPen injections, insulin. I mean, again, things these have been around for decades, the R and d paid for itself back in the 60’s. This is pure profit and that is what drove them here.

Mike Papantonio:             Let me, let’s name some names here. Mylan, Teva and Dr. Reddy. Those are some of the companies, the people involved, let, let me make, let their names too. Rajiv Malik. Rajiv Malik is part of the sandbox, who is gouging people all over. He’s the guy making decisions to raise prices. 2000 and 3000 percent on generics. Another guy’s named Jeff Glazer. So Jeff Glazer and Rajiv Malik, the other guy is, Jacob Malek. I don’t know if they’re brothers, but they certainly are thugs. And so what’s happening is, is the government doing anything about it?

Finally, yes. Department, actually, you know what, I can’t really say that. This is, this is really generated out of Connecticut. The attorney general of , excuse me, the US attorney in, in Connecticut is leading the charge. 47 states have taken a close look at it. I think they’re going to have a problem. But here again, and I’ve said this so many times, if you don’t throw them in jail, all right, this, this is a felony. I mean there’s no… As a matter of fact, one company has already pled and they’re trying to avoid going to prison.

Mike Papantonio:             Yeah. Oh absolutely. But if you don’t, if you let them go and you don’t throw them in prison, this just happens again. Big fines don’t make any difference and we’ve talked about it. You’ve got to take Mr. Malik, put him in handcuffs, walk him in a perp walk, and let him spend a little time in the pokey. I mean, there’s no other way to put it.

Farron Cousins:                  And here’s why, people have to understand this, why those big fines don’t work. This is a $109 billion dollar per year generic drug industry. So even if they fined them $100 billion dollars, which they never would, they, you’d never seen a fine that high. I think the highest we’ve seen is $10 billion, which got reduced. But nonetheless, even $100 billion, okay, well that’s one year out of this multi-decade scam they’ve been running, so they made huge profits off it.

Mike Papantonio:             We’re going to throw a kid in prison for his entire life if he’s caught selling marijuana, 20 ounces of marijuana on the street corner. I mean, he’s going to prison. If he does it three times, he’s going away for life. These guys, I mean take that same scenario, nobody goes to prison because they wear suits. They’re on Wall Street, they’ve got Harvard educations and they look very distinguished.