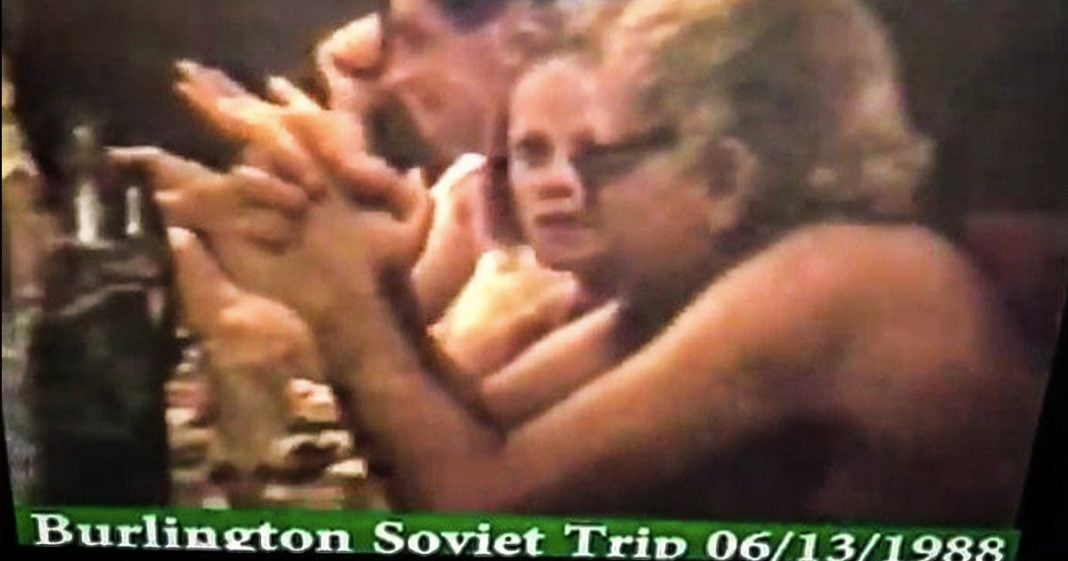 The footage from a 1988 gathering featuring a shirtless Bernie Sanders hanging out and singing with Russians has driven centrists insane, mostly because it didn’t have the impact that they had hoped. However, this wasn’t just a fun video release – this was part of a calculated plan that was concocted by members of the “Draft Beto” movement to smear Bernie. Ring of Fire’s Farron Cousins discusses this.

**Note – After this video was posted, “Top Rope Travis” reached out and explained that he pushed the video himself, not as part of the Draft Beto movement, and that the Draft Beto group does not engage in attacks on other Democrats, and this video tweet was not endorsed by the group.**

So for the last day or so, there’s been a video going around of Bernie Sanders in the Soviet Union, drunkenly, shirtless, singing this land is your land with a bunch of also drunken Soviets in this video. In case you haven’t seen it, let’s go ahead and take a look at it.

Video seems harmless enough, right? So let’s get a couple facts out of the way. A Bernie Sanders was over there because he was visiting Burlington’s sister city, uh, and I’m not going to pronounce the name of that city because I know I’m going to butcher it and I told what to do that. But nonetheless, this was an official trip. This was something he had to do, a good will measure. So it’s not like, he was like, hell yeah, let’s just go to Russia and get drunk and sing shirtless songs in a sauna because hell yeah, I’m Bernie Sanders. That’s not what happened.

And yes, his wife Jane was with him on this trip and this is the alleged trip that was his honeymoon or so. All of the Republicans and democratic centrus tried to tell us back in the 2016 campaign in reality, he had joked in his memoir that it was a honeymoon, but he was never serious about that. This was an official trip, something he was required to do and it was a good will mission on behalf of the city of Burlington and the United States, and honestly, you look at that video was what’s so bad about it? Why? Why is this a horrible thing? Why does this disqualify him from being president? He had fun once. Oh my God. How horrible is that? But nonetheless, the release of this video was intended to harm Bernie Sanders should he choose to run for president, and you know who put it out there, the folks who were the ones pushing this, trying to show us how horrible he is because he sang off key after drinking and taking your shirt off.

If the draft Beto Movement, one of the main pushers of this video was a twitter account, a top rope travis run by a man named Travis Justin, who also happens to be in charge of veteran outreach for the draft Beto movement. You go to draftBeto.org. Scroll down the page and you’re going to see Mr Travis, Justin. They’re top rope travis, and he is the one. His tweet is the one that went viral, spreading this video, trying to show us how awful Bernie Sanders is for singing a song in the USSR and American song by Woody Guthrie’s. This land is your land. How insane is that? But it just goes to show you, right? I mean, nothing is as in a a knock us as it seems. This should be a simple little video. Somebody found it, said, hey, this is kind of cool. Look at this, right?

This is funny. Uh, but no, this is a calculated coordinated effort by the draft Beto Movement. And it’s absolutely disgusting and I don’t care if you support Beto or if you hate Beto. This was a low blow and it’s a stupid move on behalf of the people running this draft Beto movement, and to be honest, if anything, based on all the comments on twitter, this is actually indira at Bernie Sanders. More to people here in the United States. They liked it. What they’re not going to like is the fact that the people trying to convince Beto O’rourke to run for president are the ones who are attempting to use this to smear Bernie Sanders. That’s what annoys me about this. I don’t care if any candidate man or woman is on video, drunken, singing, doing what the hell ever. People do those things. That is a thing that happens. Normal human beings go out there and have fun. Sometimes we have a little too much to drink, but as long as nobody gets hurt, everything’s okay, right? There’s nothing wrong with that, but these people@thedraftbettermovementofdraftBeto.org tried to weaponize this video in an attempt to smear Bernie Sanders.