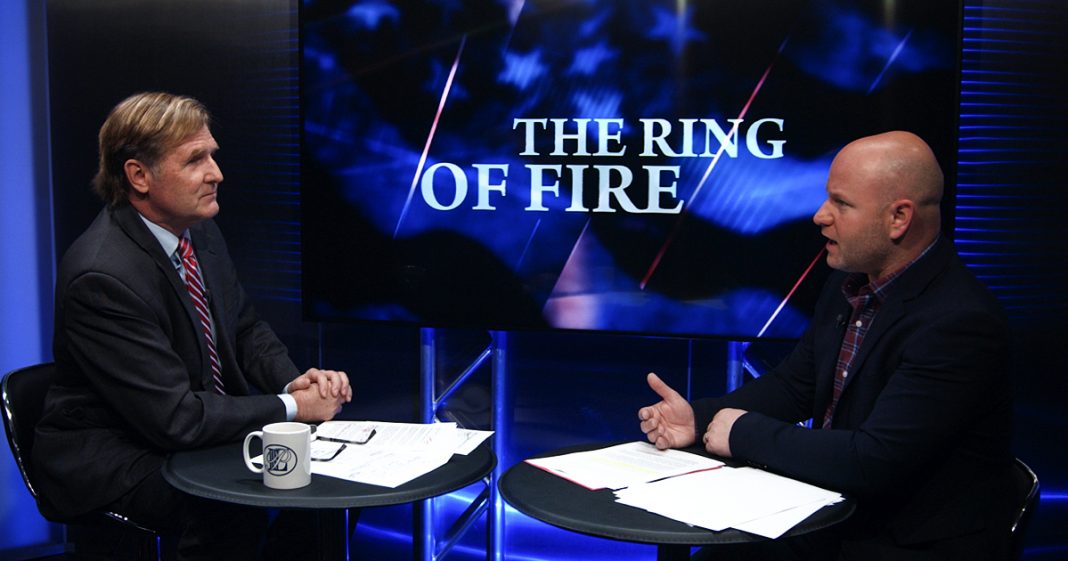 Amazon founder Jeff Bezos was caught cheating on his wife, and the two have now announced that they will be divorcing. This split could cost Bezos $140 BILLION dollars, all because the guy couldn’t stop being a scum bag. Ring of Fire’s Mike Papantonio and Farron Cousins discuss this.

Mike Papantonio:             Amazon founder, Jeff Bezos was caught cheating on his wife, and the two have now announced that they’re going to be divorcing. Uncoupling, I think is the new term, isn’t it? Celebrity uncoupling. This split could cost Bezos $140 billion dollars. All because the guy can’t, you know, trends follow people. Now, no matter how you dress this guy up, this is the guy who his employees have to, they have to urinate in bottles.

They are, most of them are having to get food stamps because he doesn’t pay them enough. They’re called pickers. They run all over these facilities, getting items and this is a, this is a bad guy. I mean, there’s no other way to put it. The other part when we go into very often he’s, he’s nothing more than a government spy. I mean, he works for the US government and in the, well you pick up with the cyber thing. I think this is…

Farron Cousins:                  Right, it’s the, this AWS cloud service, which they’ve only recently started advertising for the public, but he has been doing that, providing this cloud computing storage areas for the Pentagon for years. You know, through the DOD, Jeff Bezos for many years before Amazon was actually even turning a profit, was still making billions off of these government contracts. Because people don’t understand, there was a long time where Amazon itself up until just a couple of years ago was not turning a profit. So how did Bezos make all this money? Which because the Pentagon, he’s a war profiteer, he’s a, you know, defense contractor. That’s where it came from.

Mike Papantonio:             People don’t even understand his role as a defense contractor. They don’t understand, he’s the spook who collects all this information and sells it. He takes orders from the government to do whatever they want to have him do. Look, let me just tell you, if you’re talking to Alexa right now, okay.

Mike Papantonio:             He’s got everybody’s secrets. Well, look, here’s the way I see this story. I don’t care, I don’t care about the sorted aspect of it. Him sending penis pictures out. I mean, you know, we’ve seen it with Weiner, right? We saw it with Weiner, we saw with Eliot Spitzer. I love, I don’t know if you know this story, but I think you do. I, I put programs for lawyers on all over the country, people that are the top of the top trial lawyers in America.

And one time I had a program out in San Francisco and it was the year that, that we had Spitzer knocking around the idea, I might run for president, you know, it’s still, it’s out there. So we raised $250,000 for him out in, out in San Francisco. And the second or third day of the program somebody comes up to me and they said, you know, I think I just saw these, Bezos in the elevator with…

Mike Papantonio:             Yeah, yeah. Spitzer, Spitzer was, I think I just saw Spitzer in the elevator with two working girls and I go working girls like, well, working girls. And so he’s in, I said, well, what did you actually see? Well, he had his cap on and he had a way down on his face. He had jeans on. He looked like any man. I said, are you sure it was Spitzer? Well, I walked away from there, not really believing what they were telling me. And then of course, two years later we find out., yeah.

Mike Papantonio:             You have all, we’re raising a quarter of a million dollars for him. We have people trying to come around him and help his career. We’re, it’s Johnny Edwards, the same thing, right?

Mike Papantonio:             Johnny Edwards was exactly the same thing. People were raising money. Johnny’s our guy. We want to help him. Bill Clinton, same deal. Uh, what’s his name Craig, what was it Craig that was…

Mike Papantonio:             Larry Craig, the Republican tapping his foot. So here’s the point, people invest into these folks. They invest their time, they invest their beliefs, they invest their money, and when they do that, it’s such a betrayal across the board and you have to say, when you start seeing these types of things, bad judgment, especially in the position of Bezos. Bezos’ bad judgment affects shareholders; it affects everybody’s doing business with this monstrosity that he continues to build. I think bad judgment is the bottom line here. What, what is your bottom line to all this?

Farron Cousins:                  Yeah, I agree 100 percent. Just to hit back on the John Edwards thing, because that one stings a lot to me. You know, a lot of people who are doing this today, they have to look up John Edwards. They have to read about it and say, oh wow, that’s a thing that happened. We went through it, you know.

Farron Cousins:                  Perfect. So progressive. Had this, you know, poverty plan to lift all these people out of poverty. He was Bernie Sanders before people knew who Bernie Sanders was. Bernie was still doing the same stuff, but Edwards was out there talking about it first publicly, and this was such a shining star, such a bright future for him. He would have been president, but oh, I got power and now I’m kind of getting crazy, which is what seems to happen.

Mike Papantonio:             I tell people on this program all the time, don’t try to build your world or your expectation around heroes. Heroes are a myth. Camelot is gone. Camelot was never hero driven. I mean, it was something we wanted, it was a myth. We got to have heroes. There’s something about the American mentality where we’ve got to have heroes. I’m saying get rid of all that. Be objective and how you look at people.

I, I’ll tell you that the Johnny Edwards things really, really did that to me. I was, the Bill Clinton thing was a big problem. But then the John Edwards thing because we had done so much as you know, for both. And then you just have to say, I don’t know, I don’t, I don’t think this whole thing about heroes makes any sense. Don’t do it. What’s your take?

Mike Papantonio:             The cavalry ain’t coming. Okay. You remember the old westerns where you know the, the set of folks are pinned down, the wagons are over. They’re all, they’re out of food. They’re out of ammunition. They’re being circled by the bad guys and it’s their last stand and all of a sudden the Calvary comes over the hill. The Calvary ain’t comment. Okay, we are the Calvary. There aren’t, hero worship is killing both parties. I think it’s affecting the Democrats worse to tell you the truth.