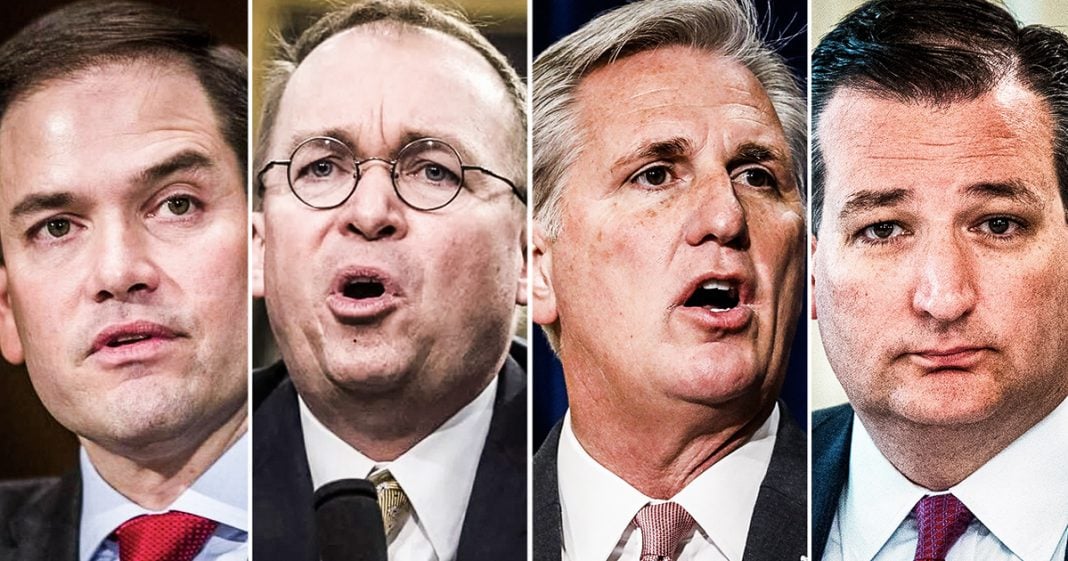 Now that the government shutdown has ended, at least temporarily, Republicans in Congress have been doing everything possible to rewrite history and pretend that they weren’t a part of it. Multiple Republicans have tweeted out that the shutdown was the fault of the Democrats, while others went on the Sunday morning talk shows to try to downplay what actually happened. Ring of Fire’s Farron Cousins discusses this.

Well, it’s the first Monday following the government reopening this past week, the end of the week. So a lot of furloughed workers are returning to work today, national park starting to reopen after the cleaning process begins. Uh, but what’s really interesting is the fact that Republicans over the weekend, we’re attempting to distance themselves from the government shutdown that lasted 35 days and became the longest in US history. You had people like Susan Collins and Marco Rubio going on the Sunday talk shows, trying to say, listen, we shouldn’t ever shut down the government. It’s a bad negotiating tactic. It never works. And usually it hurts the people who instigated it. Uh, you know, that’s actually what Marco Rubio said. It hurts the people who instigated it. So Rubio, there is admitting Donald Trump instigated it. Republicans instigated it and they lost big time. So he and Susan Collins are out there saying, look, we shouldn’t ever do this again.

This is bad policy. Nobody likes this. Let’s, let’s move on. And then you have people like Mick Mulvaney, you have Kevin McCarthy, the House minority leader. You have Ted Cruz. Those folks are out there trying to distance themselves from the shutdown in another way. They’re actually blaming the Democrats for the shutdown even happening there. Just abdicating all responsibility and saying, look what these Democrats did to you. Ignore the video that’s still viral right now with Trump saying he’ll own the shutdown and he’s going to shut it down and he’ll take the blame and it’s all on him. Forget that. That even happened. Let’s just keep calling it Schumer shut down. In fact, let’s make a clever little Hashtag of Schumer shut down, which is what Ted Cruz did. It’s what Mick Mulvaney was saying. He said Republicans were the only ones who were trying to bargain seriously here. McCarthy said that Donald Trump was doing a great job with his negotiating tactics.

Yeah, that’s not true. None of this is true. Your Guy Lost Your guys shut down the government. Your guy and your party repeatedly refused to take up democratic passed legislation that would have reopened the federal government and given furloughed workers their back pay. That was all you. You did that, but right now what we’re witnessing is republicans attempting to rewrite history specifically the last 40 days or so. They want us to think that it was either the Democrats’ fault that had happened or that every republican who joined in it really regrets it and they’ll never do it again and they’ve learned their lesson and they’re going to move on. The truth is that we’re only three weeks away from another government shutdown. The Democrats are not going to budge and they should not budge. Nancy Pelosi, you know, a lot of people had concerns about her becoming how speaker, again, I was one of them and I will freely admit that and I will also freely admit that I guess on this particular issue I was wrong.

Nancy stood up. She stood her ground and she forced Trump into a corner and he was forced to back down. So I am proud of Nancy Pelosi for that. I’m proud of everything she has done during this shutdown and I hope that she continues it and I hope that three weeks from now when Trump understands he will not get the funding for that wall. We do not go through another, another government shutdown and he decides to cut his losses. Tell aunt ann coulter to basically go live in a hole somewhere because nobody wants to hear from you and we’re going to get by with government as usual. That’s what needs to happen. Trump needs to turn off the Fox News. He needs to stop listening to Ann Coulter. Stop letting rush limbaugh tell them what to do and he needs to do what’s best for this country and what the American public wants. And that is to not shut down the government. And more importantly, not build a wall of steel slats along our southern border.