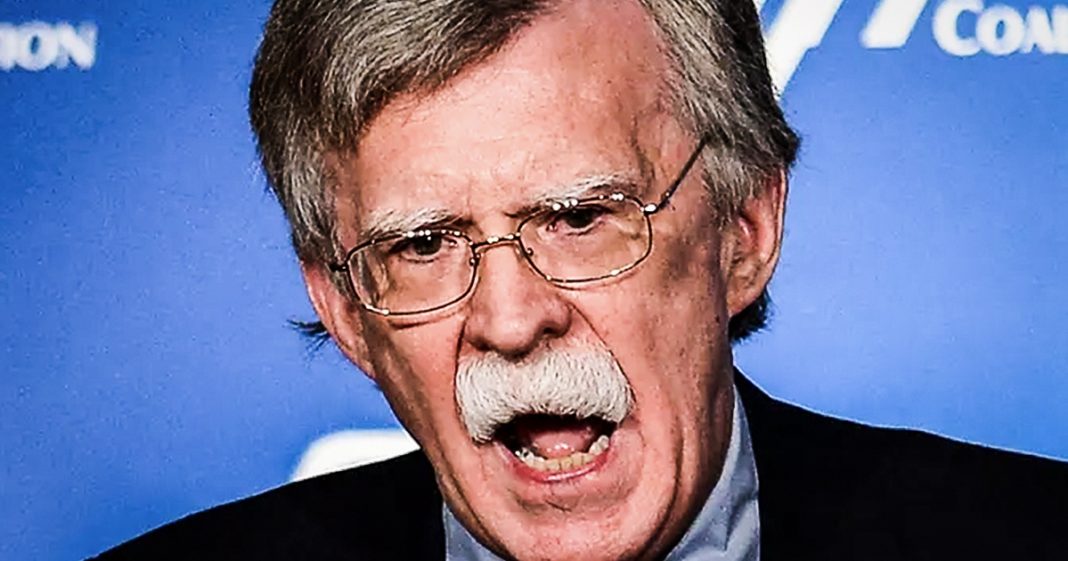 During an interview with Fox News on Thursday, Donald Trump’s National Security Advisor John Bolton said that it would be great if the United States could get their hands on that Venezuelan oil, and that statement alone tells you everything that you need to know about why the US is trying so hard to interfere in Venezuelan affairs. They’ve been playing a long game with this one, and it looks like they might just win. Ring of Fire’s Farron Cousins explains what’s happening.

So the situation in Venezuela doesn’t appear to be getting any better and it actually looks at this point like the US may go down there and start intervening in the way that we typically do, which means guns and bombs and tanks and jets killing people all because we want to take over all that sweet, sweet Venezuelan oil, and if you think I’m speaking in hyperbole than I need to direct you to John Bolton, Donald Trump’s national security advisor, and a statement that he made on Thursday evening talking to Trish Reagan on Fox News because this is what John Bolton had to say during that interview. Venezuela is one of the three countries I call the troika of tyranny. It would make a difference if we could have American companies produce the oil in Venezuela. It would be good for Venezuela and the people of the United States. That short paragraph, that Short statement word for word from John Bolton on Fox News.

You can find the video and the link in the description of this video that tells you everything you need to know about what the American government’s goal is for Venezuela. Now listen, the situation down there right now is exceptionally complicated, but what we do know is that the United States is backing the opposition party. Mike Pence actually spoke to their leader. I’m going to get this name wrong, so I apologize. Uh, one was, uh, Guido spoke to him on the phone the other night, and so the, the United States has your back room. Do whatever you need, you let us know and they want to throw over or throw out overthrows choose me. The, uh, elected leader Maduro because they don’t like him. He’s done some not great things down there that’s honest. If you say otherwise, you’re lying to yourself. Maduro has not been phenomenal for Venezuela. However, the people elected him.

I’m sorry, but that’s what you have sometimes we elect bad leaders. You want proof of that? Look at the White House. Sometimes people screw up. Sometimes institutions like the electoral college screw up. It’s not the fault of socialism, it’s just bad government. Sometimes capitalism could fail. Socialism can fail. But what’s happening right now is the United States has helped to screw over Venezuela and make the situation so much worse. We have made it to Maduro could not be successful down there. And now we are actively trying to aid the man who is saying, Nope, I’m president now. I’m the opposition party. I get to be president and we’re 100 percent doing it because we want to get our hands on the Venezuelan oil. No, for decades we’ve known that Venezuela is sitting on a huge pot of fossil fuel and the United States has been dying to get at it and now they see their opportunity because not only is there unrest and Venezuela, which creates the perfect, you know, shotty but perfect for them pretext to go in there and say, hey, we’re coming in as your liberator’s.

We’re going to fix things. You guys are all screwed up, let us come in and help. Uh, and in exchange we’re going to bring in Exxon and Chevron and Shell. And they’re gonna take over your oil industry, which is currently a nationalized. I believe it still is a. So yeah, those profits are going to come to us. The oil’s going to come to us, but we’re totally gonna help you put your government back together because we did such a great job in Iraq, uh, that we’re just going to bring it over here too. This is a disaster in the making and I’m afraid at this point it’s a disaster that is going to happen because this administration has been painting Venezuela as the enemy since day one. You know, anytime they want to talk about socialism, they always say, look at Venezuela, look at Venezuela. Let’s not become Venezuela.

You know, our governor race here in Florida, Ron Desantis says, let’s not turn Florida into Venezuela. Other governor races in the US said that in the midterms it didn’t make any sense, but that’s what they said. They want to plant this seeds in our brains that Venezuela is bad. Then it’s one of those horrible. So that was way when they finally do hit the point where they think, you know what, we can go down there and shoot them. We all, we’re all on board because we’ve been fed the lies from months and months to Venezuela is bad and the US is the only hope that they have, but the real reason this government, our government wants to go down there has nothing to do with Maduro, has nothing to do with the opposition party. All it has to do with is the fact that they’ve got a ton of oil and we want that for ourselves and we will overthrow ie. Anyone on this planet set the core, Saudi Arabia in order to get our hands on more oil.