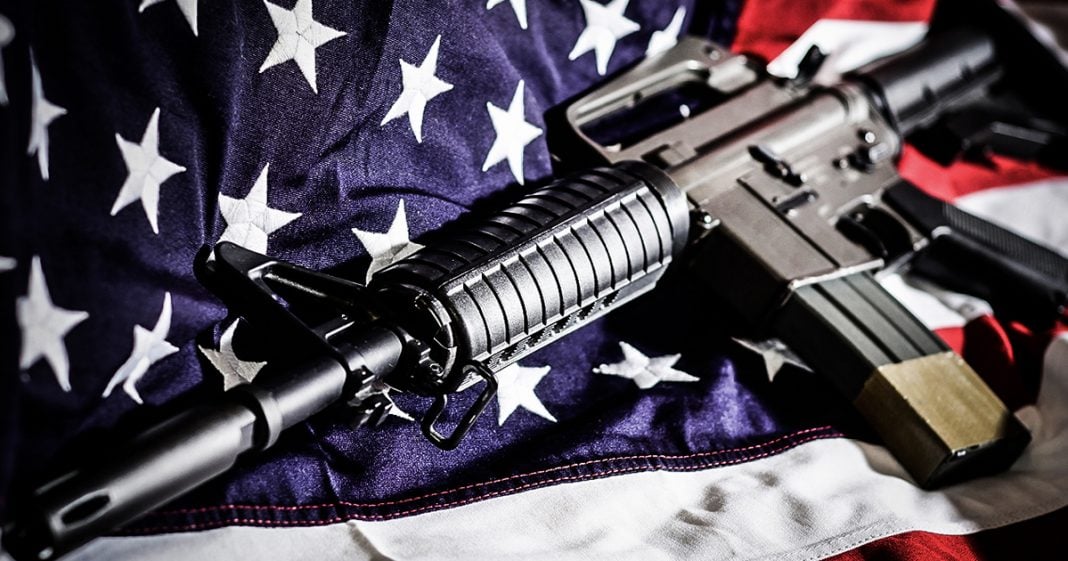 Between Wednesday and Saturday of last week, there were six mass shootings that left multiple people dead, per incident. This has become such a normal thing in this country that the media didn’t bother to devote any time to these atrocities and the public didn’t even realize that they happened. The violence is real, the deaths are very real, and the threat that we face as citizens isn’t coming from across a border. Ring of Fire’s Farron Cousins discusses this.

Last week, in the span of just four days, there were six deadly mass shootings here in the United States. Six in four days, likely even more than that from Wednesday to Saturday, multiple people killed by gunman here in the United States. Here’s just a few of the incidents that happened. This is courtesy of axios reporting on this, uh, in New Orleans, authorities in Louisiana said they’re searching for an armed and dangerous 21 year old accused of killing his parents and three others in two separate but related shootings. Uh, then you had DC were police. Chief Peter Newsham, uh, said that three men were shot and killed a separate incident earlier in the day. It was another homicide later in the day, St Louis on Friday, uh, you had a male police officer who was charged with involuntary manslaughter in the shooting death of a female officer during what was described as a deadly game with a revolver Thursday at State College, Pennsylvania.

Gunman opened fire at a hotel bar near Penn state’s main campus, killing two men and wounding. A woman broke into a stranger’s house and fatally shot the 83 year old homeowner and then killed himself also on Thursday, Rockmart, Georgia authorities and Georgia on the lookout for a gunman they say killed four people and wounded a man in a pair of shootings is that guy still hadn’t been found either. Then of course, on Wednesday, uh, we had a man who was accused of fatally shooting five women at a small town bank here in Florida, uh, that he had dreamed of, hurting classmates in high school and he had long been fascinated with it, killing a shot. Those five women execution style, line them up and shot them. Six mass shootings that we know of in four days, spanning Wednesday through Saturday. So you’re averaging a little more than one a day, which is more, uh, basically the average that we have in the United States anyway.

But here’s the point. How many of these did you hear about? How many of these stories did you see the corporate media pay any attention to? How many times did they bring on anyone to talk about this deadly epidemic happening in the United States happening every single day, more than once per day? You didn’t. They may have talked about that Florida shooting just because it was so gruesome and sadistic, but I guarantee you they didn’t talk about the other ones. You would waste your time going back trying to search for these because they don’t even exist and that’s what’s so disgusting about this. As we’ve become so numb to it, we have become so used to it that it’s not even coverage anymore. It’s not even news. We don’t even bother talking about it. It’s just a thing that happens here in the United States and we’re supposed to just sit silently and accepted and hope that the next mass shooter isn’t somebody that we’re near.

That’s where we’re at at this point. We basically go through our days hoping that we’re not going to be a statistic and the next mass shooting that happens here in the United States and the sickest part is that it doesn’t have to be this way. It doesn’t. It does not, but it is because we have politicians who are too terrified to stand up to an organization that is being illegally funded by foreign governments and they would rather bow down to that organization, the NRA, than they would stand up for their own constituents who are being slaughtered by the dozens here in the United States today.