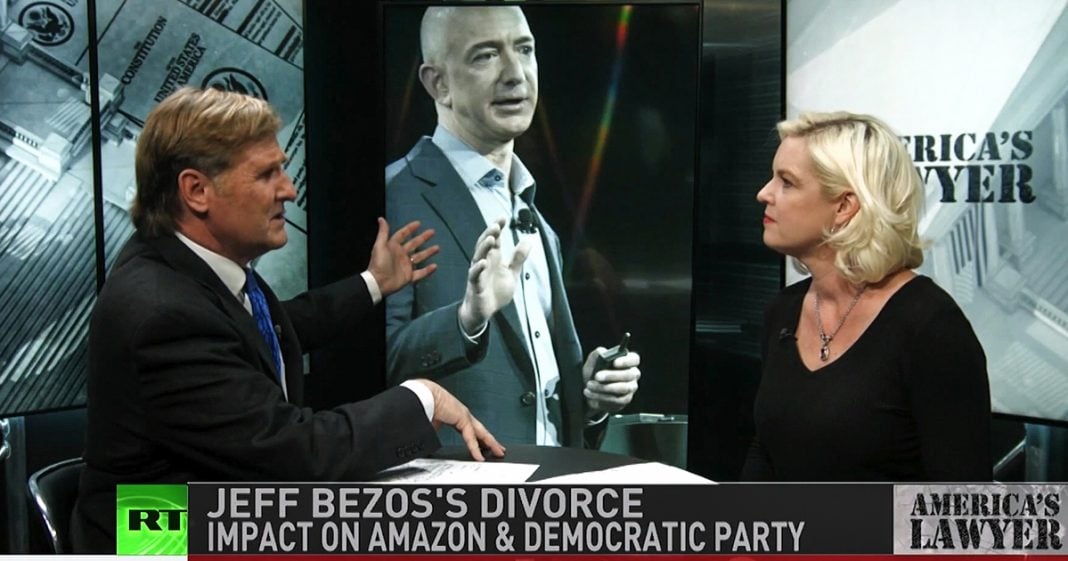 Via America’s Lawyer: Like other high profile Democrats before him, Bezos sordid behavior can impact his business and more. Legal Journalist Mollye Barrows joins Mike Papantonio to discuss.

Mike Papantonio:             Steamy texts between Amazon CEO, Jeff Bezos and his mistress, are now in the media, giving the public a glimpse into a scandalous affair that began with Bezos and Lauren Sanchez, who were both married. Like other high profile Democrats before him including former Governor, and former New York Congressman Anthony Weiner and former New York Governor Eliot Spitzer, Bezos sordid behavior can impact his business and more it, it impacts a lot of people.

See I, I don’t really care about this story as far as the lurid backstory, you know, this isn’t people magazine here. But you know, the truth is this shows such a bad, bad sign of bad judgment. Okay? Now, I don’t know what happens. You know, we saw it with, saw it with Johnny Edwards. We saw with Bill Clinton. We saw it with Ted Haggard. I mean, I could go forever.

Mike Papantonio:             Larry, Larry Craig, Republican, tapping his foot. Here’s what bothers me about it. It’s not, I mean it, the sordid story is not what I’m interested in. I’m interested when a cat like this, who’s putting thousands of people out of business for this Amazon thing that he’s building, who is involved in all types of, I can’t even describe selling telephone numbers, selling identities, working with the US government to spy on us.

You see there’s some serious stuff going on here and this is an indicator that his judgment is pretty squirrelly. It’s not just, I mean he’s sending pictures, you know, I mean everybody followed the story, knows the pictures. I don’t know whether, at any rate, sending out pictures all over the country. They’re now all over the country.

Mollye Barrows:                Well, but you’re right, he is the CEO of Amazon, one of the most influential and powerful companies, certainly profitable in the world right now. High flying stock, but you weren’t the only one that had questions about his judgment because not long after those texts were made public, the stock dropped almost one percent because you can’t help but wonder what is the future of this?

If the man who was just quoted in an article in 2017 saying that your branding is directly tied to your decisions, you know, if, if these are the kind of decisions that he’s making, if you, as an investor or you as a consumer, even you as a democratic voter, are you going to continue to be supportive of someone who’s in a leadership position if this is the kind of judgment that they’re showing?

Mike Papantonio:             It’s the same thing with, I mean, it’s not, this Bezos story has just started. It really has, it’s really just begun. But what, the only thing I really care about it is has the guy gone nuts on us? I mean, what’s happened to him? You know, there’s no question that these cats, they get a lot of power. They get a lot of money and it’s like, it’s like Nero burning down Rome. You know it’s like, yeah it’s happening.

Mike Papantonio:             So the, the question that really needs to be talked about here as the media, as the media looks at this. They seem to be going down the wrong path. It’s not just the sordid story. It is what’s going on in this little freaks head? You know, that’s what, what, what is, what’s going on in his crappy little mind right now? That’s the bigger story. Just like it was the story with, with Spitzer. You understand the backstory on Spitzer.

I have Spitzer in California. He’s given, I’m setting up a program. He’s, he’s one of the speakers I invited, gives a great speech. We raised money for him. Quarter of a million dollars. He’s going to run for president. Okay. While we’re out there, somebody says, this is years before he was ever caught. Somebody says, you know, I think I saw Eliot Spitzer, it was two years before he was caught.

Mike Papantonio:             I think I saw Eliot Spitzer in the, in the elevator with a couple of working girls. And I, my reaction was, oh its craziest thing I’ve ever heard, but something happened with this cat and the people he affected. The Democratic Party, the democratic workers in New York, the people who were behind him to become president. Just like John Edwards. Just like Bill Clinton. You know, all of the people he affects.

That’s what the story to me is really about the judgment aspect of all of that. It’s not just about the sordid stories, look, here’s my idea. Redistribute the wealth. Let the, let the wife take as much as she can, redistribute to the wealth, to the cats who are working for him, who have to live on welfare because the guy won’t pay them enough. That’s the story.