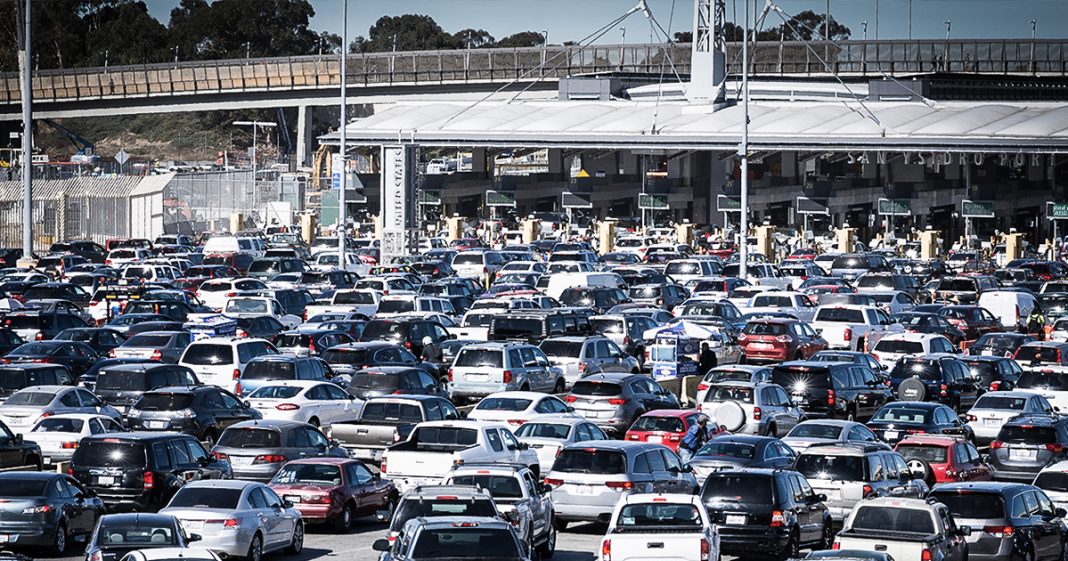 According to new reports, American citizens are traveling in droves across our southern border to get better, and cheaper, medical care than they’d be able to get here in the United States. But rather than trying to build a wall to keep us out, Mexico is welcoming us with open arms in order to bring in more money and more commerce to their cities. Our country is losing money as a result, and Ring of Fire’s Farron Cousins explains why this matters.

Donald trump told us recently on twitter that there’s actually two caravans. There’s two immigrant caravans coming through Mexico headed towards the United States to now the last one fizzled out. The one before that fizzled out, but totally believable that there’s now two different caravans, I guess maybe racing each other towards the US border to see who can get here first. I don’t know how the Hell it works. All I know is that they don’t even exist, so sure. Why not speculate that there’s this big multimillion person race coming towards the US border, but here’s the thing. Immigration is actually a real issue, right? We, we, we do have problems with our immigration system. One of the biggest problems is that we’re blocking children in cages and separating them from their parents and then oops, losing their parents, or worse, we’re just letting the kids die. To me, that’s the biggest immigration issue, but here’s the thing.

It works both ways, right? Because it’s not just people coming from the southern border into the United States. We have plenty of people, in fact, thousands of people per day going from the us into Mexico, parking their cars in the United States than walking across the border into Mexico and do you know why they’re doing that? Well, according to new reports, we’ve got thousands of people leaving the us to go to Mexico on a daily basis to seek cheaper quality healthcare. So while government officials, the trump administration, they’re sitting here demonizing Mexico as this hell hole, which is actually a nicer phrase than what the president has used in the past. They’re horrible. They’re awful. They’re all drug dealers, rapists, killers, whatever they are. And then the American public is like, Oh, I hate those immigrants. Hey, you want to go down to Mexico and get some dental work done?

It’s 80 percent cheaper down there. You want to go buy some prescription drugs? We can’t afford to buy them in the US. So it’s either we hopped the border and purchase them or we don’t get them. That’s literally what’s happening every single day with thousands of people here in the United States according to the new report. And if you’d like to check out the report for yourself, I encourage you to do so. You can find the link in the description of this video. It is well worth the read. But here’s the thing, again, we are demonizing not just the people that come over here, but the entire country. I mean basically everything south of the United States right now is being demonized by the current administration. And yet they’re obviously doing something better. They’re doing something better and a lot of it has to do with dental care and prescription drugs.

Um, what’s really striking to me though is that again, we have thousands of people according to the report going into Mexico every day, you know, they stay there, they get the dinner work done, or they go over there, they grabbed their prescription drugs and they hop back across the border. Have you heard anyone down there in Mexico saying, we’ve got to build a wall. We had to keep out these filthy, disgusting, sickly Americans. We had to keep them out of Mexico. No, but you do hear people like Tucker Carlson saying, immigrants make us dirtier. Immigrants make us sicker and yet we’re actually the ones fleeing the United States to go into Mexico to get better medical care. That to me is one of the biggest ironies of this entire immigration story that has blown up throughout the trump administration, but it’s also very good evidence that we have to fix our healthcare system in the United States and we have to fix it immediately.

Nobody in this country should ever have to leave our own borders to go get better, cheaper medical care. Medicare for all is the only solution at this point, the only one, and I do firmly believe that it is an inevitable solution. Something that will happen hopefully within the next five to 10 years, if not even sooner than that. The public wants it, the public needs it, and until they get it, they’re just going to have to hop the border to the south and sometimes hop the border to the north to go and get better, more cost efficient healthcare because our system in the United States is absolutely horrible.