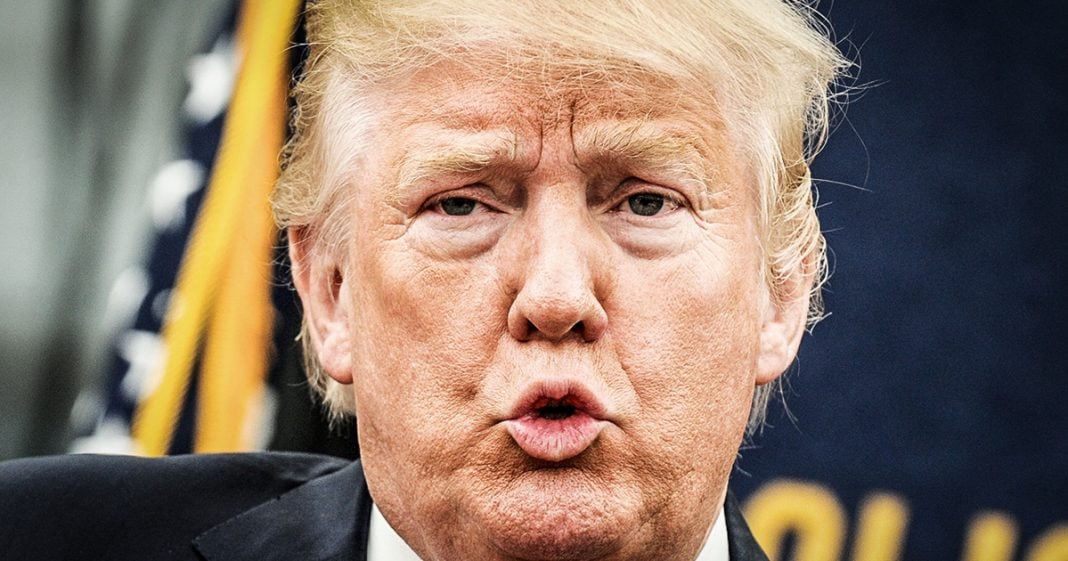 At a meeting of the Business Roundtable this week, CEOs lamented the fact that the lack of immigrants coming into the United States is hurting their businesses. They claim that they are worried about innovation being stifled, but the reality is that they are mad that their endless supply of cheap labor is being cut off by the administration. CEOs have always wanted open immigration, but now they are panicked that Trump won’t let that happen. Ring of Fire’s Farron Cousins explains what’s happening.

Earlier this week, some of the top ceos in the United States met for their little business round table group discussion, and as part of this business round table organization, they issued a report talking about how much this current Trump administration sucks. Now, it didn’t say Trump administration sucks, but they did say that all of his policies are hurting everything they hold dear and buy everything they hold dear. I’m talking about money specifically. They did call out government shutdowns and the fact that the, uh, you know, national science foundation hasn’t been able to grant any grants for over a month now. And that hurts innovation here in the United States. You know, schools are star for funding so people can’t get proper educations and that also hurts what the business round table wants to do. They talked about that in the report as well. They also talked about the fact that without immigrants, how the hell are we going to stay in business?

See, that was a part of the report that was actually kind of buried in it. But to me it’s the most important part. Yes, this administration is hurting innovation. They are hurting science, they are hurting the future generation of American leaders. Those are very important and those need to be addressed. And the business round table is 100 percent correct about those. They’re wrong about immigration. No. Well, here’s the weird thing, their rights about immigration, but the write about it for the wrong reason because here’s the thing, they’re talking about the fact that all immigrants come over, we, we depend on them. We need them. We need their support, we need their dollars, but more importantly we need their bodies. We need the cheap labor. We need these people coming over the border and we need them to work for $5 an hour, $3 an hour out there in the fields, picking crops, you know, cleaning up our offices, whatever it is, making our textiles.

We need that cheap later labor building, our roads, our bridges, our schools, our infrastructure. We need that cheap labor and Trump’s cutting off the spigot. We can’t get as many immigrants over here to work for. Nothing as we used to be able to do. He’s cut back on visa programs, although he’s getting a more than 100 a year. Uh, but yeah, he’s hurting it for the rest of them. And listen, I fully understand the need to have migrant workers come into the United States. We have plenty of industries and businesses that are 100 percent dependent upon those migrant workers. The sad reality though, is that most of those businesses take advantage of these people. They pay them less money than they’re allowed to, but they don’t necessarily always report that they take advantage of them. They screw them over, but these people need work. They need the job.

So they do it anyway, but the business roundtables pissed off because they’re not able to get that cheap supply of labor anymore. And Oh my God, what happens then? Do either fold up shop or do we have to hire an American citizen to do it for $15 an hour? We don’t want to pay people more money. We don’t want to help the economy. We want to help our bottom line. I want to help my bank account have more Zeros at the end of it. That’s what the business round table is whining about and what’s interesting about this, several things actually is one, the US Chamber of Commerce has basically been on that same side of immigration for decades. The US Chamber of Commerce and the most powerful businesses here in the United States love immigrants. They are the only ones who have ever said, yeah, let them all in. Let’s open up the boarders. Come on guys, because they want cheap labor.

They want people to take advantage of us. Chamber comment was commerce was very vocal during the Bush administration when they thought just thought about clamping down on immigration. Trump understands this too. I mean how his business is his own personal businesses are dependent upon cheap immigrant labor. People he can take advantage of and he had no intention ever of building the wall. It was a campaign ploy and then it was an administration ploy because if he was serious about it, he had done it in the first two years when the Republicans controlled everything in this damn country. It wasn’t until Democrats took over that. He was like, Oh crap, I gotta do something here. Oh, I’ll just say that the Democrats aren’t playing nice and then I don’t have to build the wall and I can keep the cheap labor. Business Roundtable can keep their cheap labor.

Chamber of Commerce can keep their cheap labor and then incomes. Ann Coulter Saying, Oh, hell no. You’re building that wall. We’re getting that wall. You’re giving us that wall to which Trump says yes, yes ma’am. Ms Ann Colter. I will get that done. Don’t you worry about it. It’s, it’s happening. I’ll shut down. The government all declare a national emergency. All create a constitutional crisis to give you your wall, and now the businesses are freaking out because they like Trump himself, believed the wall was just a talking point to drum up the Republican base and it was until Ann Coulter, so now they’re panicked. Now they’re freaking out because if that wall goes up, if they are cheap labor dries up, then so too with their profits, and that is something that corporations are never happy to have happen. But here’s the thing, you want immigrants to come in, you want them to be your labor supply. Fantastic, but we need somebody looking over their shoulders, making sure they’re not getting taken advantage of, making sure that they are being paid comparable wages to the area in which they live, making sure they are at least making minimum wage because without those immigrants, according to the businesses themselves, these businesses won’t survive.