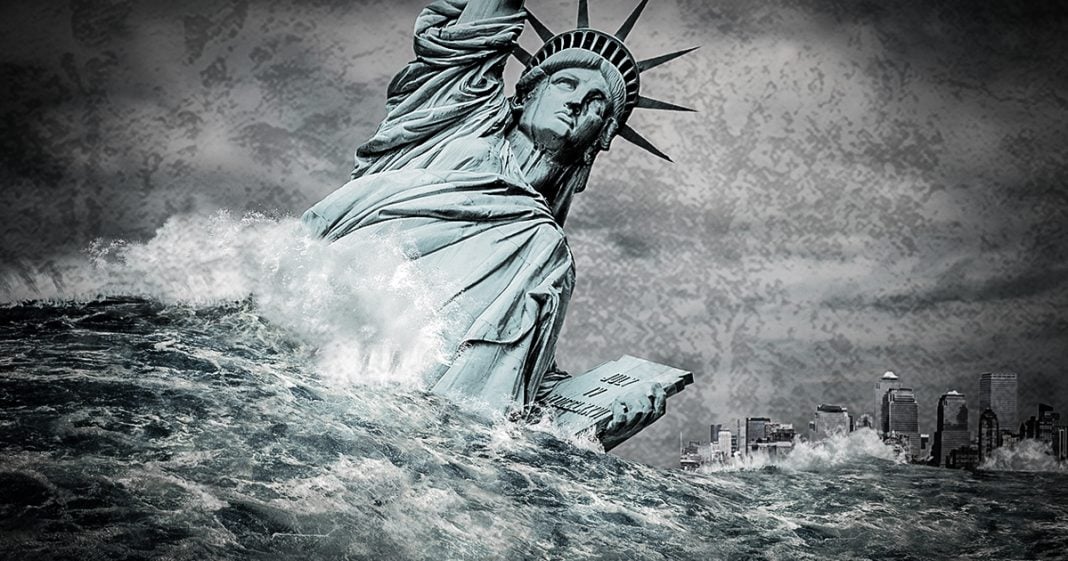 According to an alarming new study, the rate at which Antarctic sea ice is melting is growing exponentially, and as a result, we can expect sea level rises of up to 10 feet within the next century if we stay on this current trajectory. The oceans are warming faster than scientists had predicted and we are running out of time to address the greatest global crisis in our history. Ring of Fire’s Farron Cousins explains what’s happening and what needs to happen to prevent catastrophe.

In the last few months, we have had some pretty horrible studies come out showing just how little time we have left to fix the planet before we face some of the most catastrophic impacts of climate change. Well, adding onto that list of absolutely terrifying stories and studies that have come out is a new one showing that within the next century, actually by the end of this century, we could see sea level rise of up to 10 feet globally thanks to the rapidly accelerating melting of Antarctic ice cap, specifically the West Antarctic ice sheet. It’s unstable. It is collapsing and it is melting is what this new study tells us, but it also tells us, oh, it’s melting a little bit faster than we had predicted it would, and by the end of this century, if it melts the way it is now, if it stays constant, not even if it accelerates, but if it just stays constant. 10 foot sea level rise across the globe, 10 feet.

To put that into perspective, a six foot sea level rise would put the entire tip of Florida for a good one, hundred and 50 miles from tip inland. That would all be underwater. Now. Those parts of Florida would be gone forever with just a six foot sea level rise at two foot sea level rise would destroy most of the barrier islands throughout the Gulf coast and some along the Atlantic coast to fleet, and yet we could be looking at 10 foot sea level rises within our lifetime if things stay constant, and that’s the key because we have the opportunity right now to not stay constant. We have the opportunity right now to reverse course. There is still time. That clock is ticking faster and faster every day, but there’s still time we could get off fossil fuels, we could be investing in renewable energy sources and infrastructure to carry that.

The technology exists. We’re just not using it and that’s what’s the most frustrating about all this. It’s there. We’re just not doing it and we have an administration right now that’s doubling down on fossil fuels, cutting subsidies and renewable energy programs all together in order to burn more coal in order to rely more on fracked gas and conventional oil, so we’re not reversing course. We’re going head on into the same fuel sources that have caused this problem to begin with. I say there’s still time. Me Personally, do I think as a, as a race, as a planet, as a country, are we going to do it? No. I have zero faith. I have no faith at all. I do not think it’s going to happen. I think instead we’re going to have to live with a world destroyed by climate change. Now, maybe that’s just me, but we’ve seen how human beings are. We’ve seen how politics is. If you can look at all that and tell me you actually have faith in us as a, as a species to do something about this, then you’re much more optimistic than I am. I don’t want to sound gloom and doom. I don’t want to say like, we’re all screwed. We’re all going to die,