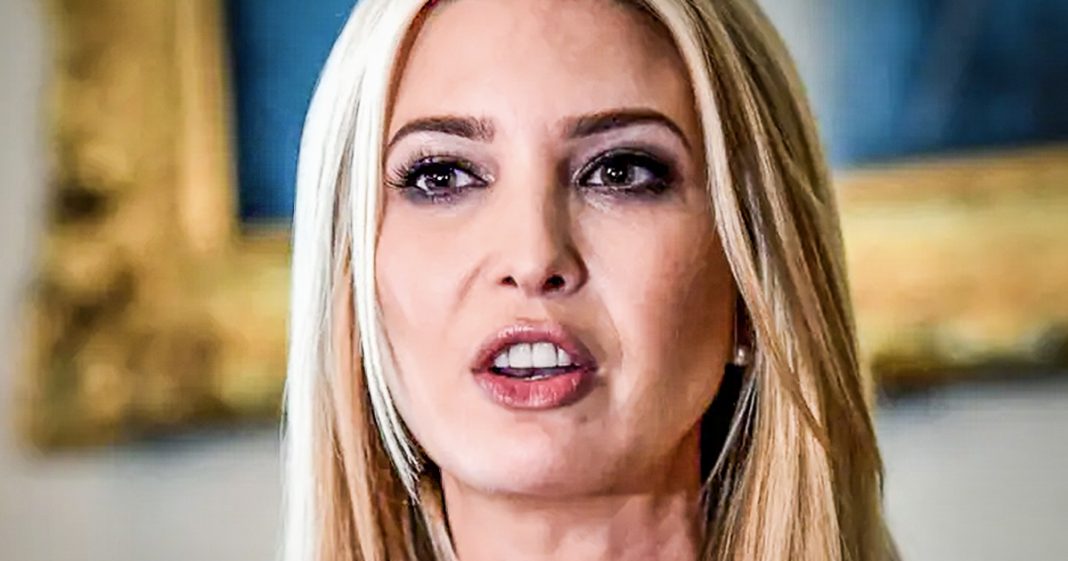 Citizens for Responsibility and Ethics In Washington has launched another complaint against Ivanka Trump, this time for allegedly violating conflict of interest statutes by holding stake in a company that benefited greatly from a recent Trump policy announcement that Ivanka was involved in crafting. The tax breaks that the administration announced as part of their “Opportunity Zone” program directly benefited Ivanka, and Ring of Fire’s Farron Cousins gives the details about what’s happening here.

The group citizens for responsibility and ethics in Washington has filed yet a another complaint against Donald Trump’s daughter, Ivanka Trump, for allegedly violating conflict of interest laws over what this administration calls these opportunity zones. Now occasion, not familiar with it, which I wasn’t myself, had to do a lot of research into this, but basically these opportunities zones. This is a program that the Trump administration announced shortly before the midterms, and what it is is they were offering me massive tax breaks to any developer real estate. Whoever it is, would go into poor communities and start buying up real estate. If you do that, go buy this real estate. We’re going to give you a massive tax break. Well, who do we know that’s in the real estate business that has a lot of money willing to go around and snatch up all these properties? Oh yeah.

Jared Kushner, Ivanka Trump’s husband, and in fact, cushner actually owns an interest in a company called contrary according to this crew complaint that was willing and able and ready to take advantage of these opportunities zones because they have programs specifically designed to help people get loans. And buy up these opportunities zone properties, Ivanka Trump, again, according to the crew complaint, was working behind the scenes to help this administration draft this plan to come up with the plan and to help sell it to other members of the Trump administration. Therefore, her involvement directly in this and her husband’s involvement by directly financially benefiting from this was 100 percent in illegal conflict of interest. And they all knew it. She didn’t recuse herself, he didn’t sell his interest, she pushed it, he profited. So thereby she profits a little bit off it as well, obviously. And that’s where we are today.

And that is why crew has been out there as one of the leaders with these particular complaints. I mean, they’ve done it with Kellyanne Conway, with her of violating the Hatch Act. They’ve had to do that multiple times with her. Um, they’ve done it with the emoluments clause lawsuits. They’ve done it multiple times with Ivanka Trump herself. They are staying on top of things as they have for years now. And that is sorely needed, especially in the environment that we have in Washington dc today. We need these outside watchdog organizations like Cru, like public citizen out there showing the corruption, highlighting the corruption, but more importantly, taking the corruption to court, filing the complaints because it is one thing to point it out and hope that the media picks it up, but it’s another to say we don’t care if the media talks about it. We’ve got lawyers and we’re going to try to do something about it to put an end to it because make no mistake.

The only reason people like Ivanka Trump and jared Kushner in the White House today is because they think they can profit off of it. Hell, a very strong argument could be made that the only reason Trump is in the white house is because he thinks he can profit off of it and according to other crew complaints and lawsuits in the past, he has. He has a lot. He’s making a ton of money off being the president of the United States and Ivanka Trump and jared kushner are using every possible opportunity that they have to do the exact same thing as her dad.