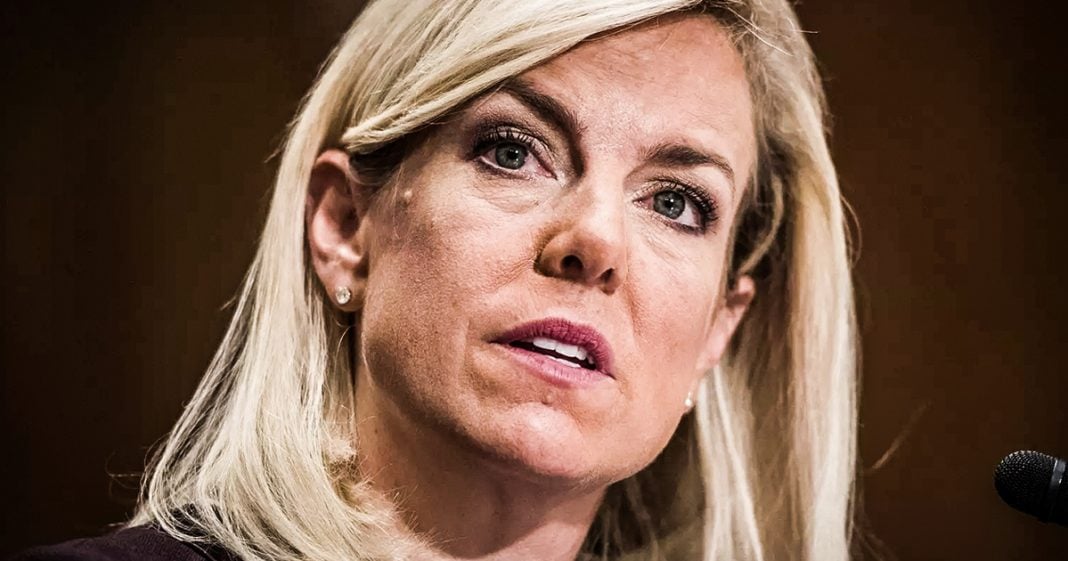 Democratic Senator Jeff Merkley has asked the FBI to investigate whether Homeland Security Secretary Kirstjen Nielsen lied during her Senate testimony a few months ago when she said that DHS did NOT have a policy to separate families at the border. Newly released documents show that DHS did, in fact, put this policy in writing, proving that Nielsen wasn’t being completely honest. Ring of Fire’s Farron Cousins discusses what could happen if the FBI investigates.

Democratic Senator Jeff Merkley, like so many other people in the United States, says that he is sick and tired of the lies, the nonstop lies coming from the Trump administration, and that is why Jeff Merkley last week decided to ask the FBI to investigate whether or not homeland security chief, Kirsten Nielsen lied under oath during her testimony to the House of Representatives when she said that they had no policy, not now, not ever of separating migrant families at the border. Now, here is why Jeff Merkley ended up requesting the FBI look into whether or not she has lied under oath and that’s because new information has emerged showing that the Trump administration was actively drafting a policy as early as December 2017, two separate migrant families at the border, which goes against what the Trump administration’s been telling us along with Kirsten Nielsen in that they had no policy of doing this. This wasn’t the policy, this wasn’t the protocol.

This wasn’t standard operating procedure. It’s just a thing that happened. It wasn’t something we sat down and thought out and drafted and put into place. It just kind of started doing it because why not I? That is essentially the answer we’ve gotten from this administration. That is what Kirsten Nielsen told Congress. She told that to the Senate last October and she told it to the House of Representatives roughly a month ago, but now we find out that that’s not true at all and if it’s not true, but she told Congress that they didn’t have a policy even though they did, then yeah, Merkley’s 100 percent, right? That would be perjury that would be probably more than enough, uh, needed to get cursed in Nielsen, removed from office. And more importantly, to show this administration that eventually, sometimes it may take a while, but eventually there are consequences for the nonstop lying.

There are consequences for the horrid policies that you have put in place and we’re going to find them. We’re gonna Nitpick everything. We’re going to comb through it and we’re going to find out what you’re lying about and then we’re going to hold you accountable for it. That is exactly what has happened with this situation with Kirsten Nielsen, but make no mistake actually, there’s more children separated from their families than initially thought. According to recent reports, they have lost plenty of children, hundreds. They’ve lost hundreds of parents because they deported them back and didn’t keep records of which kid went with which parents, so they just don’t know what to do anymore. Parents who’ve come back trying to get their kids find out that their kids who already sent the orphanages and adopted out, but they didn’t keep records well enough so they don’t know which orphanage that kid ended up with or where the hell they are today.

That’s how shotty this whole thing has been. And look, we’re probably not going to get anybody who’s going to be better than Kirsten Nielsen as homeland security chief. The flip side of that is we’re sure as hell not going to get anybody worse because you really can’t get much worse than that. So I’d say we take our chances here. But here’s the thing about Jeff Merkley, we have so many politicians out there right now feeding into the pablum. You know, I’m running for president, I’m going to be running for president because I love America. It’s actually Kamala Harris announced her thing. I’m running because I love America. Not exactly a policy or a platform. Um, but sure, whatever. And then you have folks like mercury out here who are like, hey, we have kids in cages. She’s lying about it under oath. Can, can we do something about this?

Dammit, this is insane. Merkley to me is the sleeper Merkley for me is the person I am praying comes out and says, damn it, I’m running for president. Merkley would have my vote. Merkley would undoubtedly have my vote. I’ve watched his career. We had him on ring of fire a few times over the years. Merkley is a true progressive who’s focused on issues and who is looking for solutions right now. He has his name on some of the best legislation out there to protect the environment. Merkley is a very, very good democratic senator and he would be a phenomenal Democratic president. Should he choose to throw his hat into this overcrowded ring and run for president.