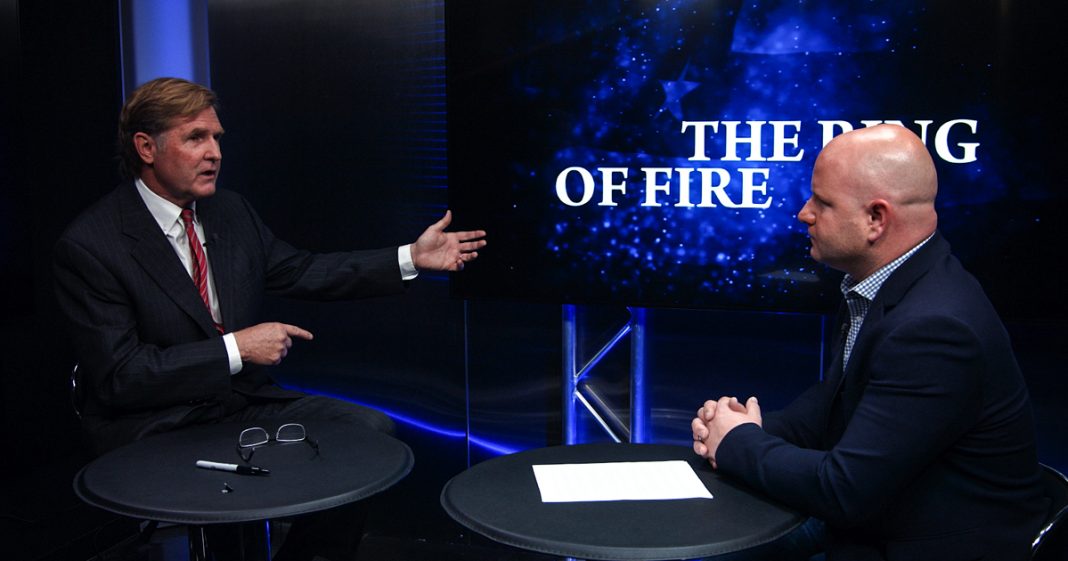 Wells Fargo is trying to blame a computer glitch on several recent spates of home foreclosures, but the facts of the case make it look less like a computer error and more like a targeted program to force people into foreclosure. This wouldn’t be a first for the banking giant, and like last time, it is unlikely that any of those responsible will ever see the inside of a prison cell. Ring of Fire’s Mike Papantonio and Farron Cousins discuss this.

Mike Papantonio: Banking giant Wells Fargo claims that a massive round of home foreclosures recently was due to a computer error, but they haven’t said whether or not they’ll give people back their homes that lost their homes because of this computer error.

But Wells Fargo says, “Oh, no. It was just a glitch. You know, we’re pretty busy. We’re making a lot of money and it’s a glitch. Sorry.” Now, same thing happens again. Only this time, this is directly affecting foreclosures. Right? This glitch is actually putting people, what, about 500 people out of their homes?

Farron Cousins: Right, right. Right now, we’re looking at 545 on top of the 400 who lost it in the last computer glitch. And here’s what’s, not ironic, but very odd about this computer glitch. It’s only targeting people who seem to owe less than their home is worth, meaning that if Wells Fargo forecloses on it, they can make a profit. It’s not targeting people who are underwater on their home.

So where if Wells Fargo acquired it via foreclosure and sold it, they still lose money, none of those people have been affected, and there’s plenty of them out there who owe more than it’s worth. This is targeting people who are coming for help. They know they’re in financial distress.

That’s why they’re trying to seek these mortgage readjustments, and rather than having a person review it and look at the paper and say, “Okay, this checks out. You’re okay,” they’re putting it through this automated program, which is designed to fail, and they’re denying these people these remodifications. They’re losing their homes as a result, because they can no longer pay their monthly payment. And that’s where we’re at. And now, once they get popped for it, because the foreclosure bills …

Mike Papantonio: Well, popped doesn’t mean anything. You get caught.

Mike Papantonio: They get, “Okay, we’re going to fine you $50 million. Well, they made that while you and I have been sitting here talking, okay? So $50 million doesn’t mean anything. Only thing that means something is when you say, as we’ve said so many times, “You know, why can’t we put these people in prison like we do any other criminal?” These are criminals. This is not a glitch. Okay, if it’s a glitch, it sure is well-designed, isn’t it?

Mike Papantonio: The glitch happens, just glitch on people that are most susceptible to being a victim. That’s where the glitch falls. That’s the glitch goes after people we want to go after. We glitch those people. That’s what this really means.

Farron Cousins: Right. I mean you’re not seeing people with these huge mansions out there. They’re not having glitches in their computer or paperwork here. And here’s the thing is that Wells Fargo set aside, I think, about $8 million, because of the victims, $8 million, here’s your settlement.

But when you’re talking about nearly one thousand people who lost their homes, many more were victims of this, that’s pennies compared to the profits that Fargo already made selling those houses. They made way over $8 million selling a thousand homes that they took fraudulently.

Mike Papantonio: Well, you understand, and we’ve talked about this before, they calculated the cost of doing business. It’s like the same things with the pharmaceuticals. Pharmaceuticals on the market, we know it causes kidney damage.

They calculate how many kidneys are going be damaged, how many people are going to die, how many billions of dollars we make just by keeping this on the market. They do the math, they said, “Ah, we can keep it out there. We can pay off at the end.” And it’s a good business decision. It’s the same thing here.