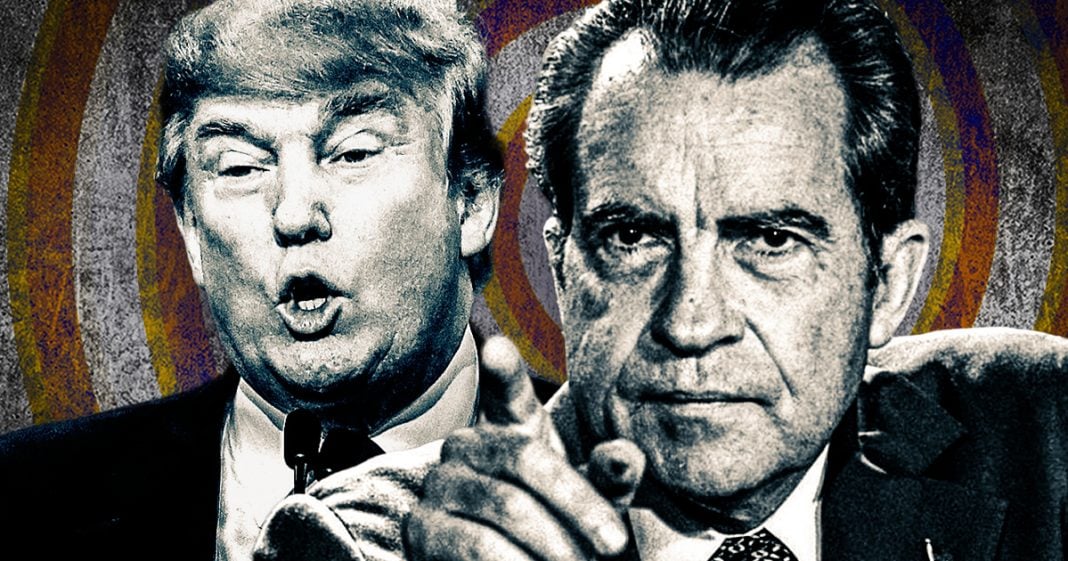 According to a new book by former Trump staffer Cliff Sims, the President started an “enemies list” that he supposedly still keeps with him to identify all those who are not loyal to him. This is yet another similarity between Trump and Richard Nixon, and it isn’t something that he should be proud of. Ring of Fire’s Farron Cousins discusses these similarities and how history is obviously repeating itself today.

Next week there’s a new book coming out by a man named Cliff Sims. He worked on 20, uh, Trump’s 2016 campaign, uh, then it works at the White House as a communications eight until May of last year. The book is called team of Vipers. My 500 extraordinary days in the Trump White House in this book, Mr Sims has made a lot of, uh, accusations, claims, whatever you want to call them about Donald Trump himself. And one of the most, I guess, shocking claims that he has made is actually a claim we’ve heard in the past. And that is that Donald Trump has compiled an enemies list because he’s so paranoid, not just of members of the press are people out there, but actually people within his own White House, he is afraid they are not loyal to him. So according to a story recounted in this book by Mr Sims here, a Donald Trump and Keith Schiller, Trump’s personal bodyguard, they were with him in the Oval Office.

And Trump said, let’s make an enemies list. So they got them a sharpie and he got White House stationary and he started writing down the names of anybody within his own administration that he felt was not completely loyal to him. Now, if this sounds familiar, there’s a couple reasons why. First and foremost, this is not the first time we’ve heard this story. We have heard others in the White House also admit that Trump keeps an enemies list, and if it sounded familiar, when we first talked about it and when others first talked about it, it’s because that’s exactly what Richard Nixon did. Nixon captain enemies list. He kept an enemy’s lifts of people within his own administration. People in Congress, people in the media, people in Hollywood, Nixon just hated all these people. And these are my omnium or run them down and keep this list. The list is published.

It’s available online. You can find Nixon’s enemies list. And here we have just yet another parallel between Donald Trump and Richard Nixon. You know, Nixon used to claim witch hunt there just after me for political reasons all the time, much like Donald Trump, Nixon and kept an enemies list, much like Donald Trump. Nixon’s entire presidency was shrouded with the conspiracy investigations and all kinds of mistrust from the American public as a result of it. Same with Donald Trump. There’s only one thing left at this point and that’s for Donald Trump to resign in disgrace, telling us he is not a crook and I think we’re all hoping that that last parallel between Trump and Nixon does come true. But back to Sam’s book, right? I mean this is, you know, guy was in the White House for 500 days. He’s got some stories to tell. So let’s talk briefly about a couple others, but he says, he says of Trump, he consumed tv like the late Roger Ebert must have watched movies.

He commented on the sets, the graphics, the wardrobe choices, the lighting, and just about every other visual component of a broadcast. Sure. He liked to hear pundits say nice things about him or White House officials defending them from attacks, but everything came back to how does it look? He also said that whenever the president would go out there and deliver a speech somewhere, they would have to record all the networks and get screenshots of all the, uh, uh, Chiron’s they’d put on the bottom of the screen and then they would print them out and put it in a folder to have ready for the president as soon as he walked back into the White House. Why? That was happening, not really sure, but it’s a thing that happened according to a Cliff Sims here. The bottom line is that Donald Trump is a paranoid individual. He cares too much about things that don’t matter like television and money, but those are the two things that Donald Trump cares about. He cares about people adoring him and he cares about making more money and Cliff Sims accounts of what has happened here. Kind of back that up. Especially the fact that he was willing to create an enemies list because he thought there were people in his own administration who didn’t adore him. That doesn’t make them an enemy. Mr Trump. It just makes them a decent American.