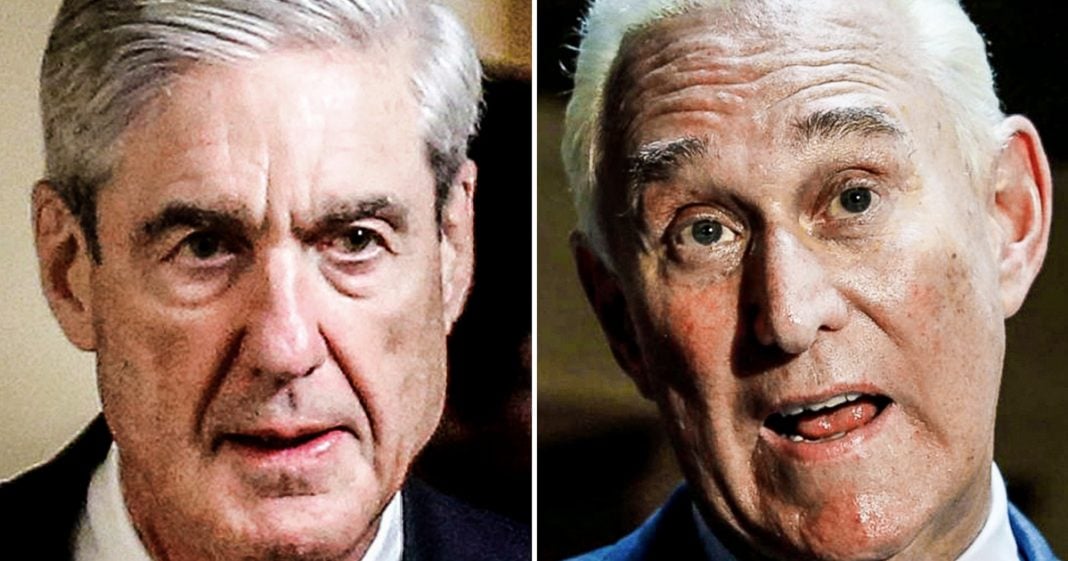 Longtime Trump ally Roger Stone was arrested in an FBI raid early Friday morning following an indictment handed down by Robert Mueller’s office. The indictment alleges that Stone acted as a go-between for Wikileaks and the Trump campaign/organization, and that he was openly working to undermine the Democratic campaign. Ring of Fire’s Farron Cousins explains the indictment and arrest and what it could mean for Trump.

Well, as everybody knows by now in an early morning raid by the FBI, Long Time Donald Trump, confidant and ally, Roger Stone was arrested following an indictment handed down by Robert Mueller, the special prosecutor’s office. Um, here’s the thing, right? Roger Stone has been a major bad guy in American politics since 1972 at that time. He worked on newer Richard Nixon’s reelection campaign. Uh, and that was the whole Watergate scandal. So stone was right there when all that happened. And he’s pretty much been a scumbag ever since, so a lot of people are celebrating today, not just because of these new indictments and what they say about what he did for Trump or the Trump campaign, but also because this is a guy who’s been screwing around with American politics for decades. And it’s nice to see him finally get a little comeuppance. So what are the indictments? Say There’s seven indictments against Roger Stone for things like perjury, which was his lying to Congress.

Uh, there is obstruction of justice and witness tampering, which involves a radio host named Randy, a credit co, I believe his name is. Um, and what happened was that stone was communicating with credit co who was also in communications with the Wikileaks and stone was telling credit code to no do not tell the FBI the truth, do not tell them what we’ve been doing, to which Randy said, yeah, I think it’s a mistake to lie to the FBI. We should be, we should be honest with them when they come and question us. A molar has those text messages, by the way, according to this indictment. And to me that’s really the biggest part here is that this diamond does show that Roger Stone was acting as the intermediary between the Trump campaign and Wikileaks. Okay, that’s what this indictment is telling us happened. That’s what Roger Stone was lying about.

That’s what he was telling other witnesses to lie about. Roger Stone was the guy coordinating things with Wikileaks and the Trump campaign, thus becoming the firmly established link between those two organizations. Trump campaign and Wikileaks. So a lot of people are saying, wow, you know, this really shows that Donald Trump and his campaign via Roger Stone and Wikileaks were colluding with Russia. I guess stop you right there because as it stands right now, we do not necessarily have that link established just yet. I, I firmly believe it will be. I firmly believe it did happen, but let’s not read too much into this or put things there that don’t actually exist yet. That’s what we have to be careful of. Here’s what it does mean. It does mean that yes, Wikileaks was working with the Trump campaign, whether it was through stone through Donald Trump Jr, who I’m sure right now is probably shaken a little bit thinking that the next round of indictments are surely going to hit him as many have actually predicted that the next indictments, you know, months ago they said, oh, probably it’ll be Roger Stone first.

Then short time after we’re going to see Kushner and Trump jr. Well now that we got stone, those two are next on the list and the indictment does also show that stone was coordinating with an individual, a top, a Trump campaign official, although it does not list that person’s name because they don’t have to list the person’s name. Actually. They’re not even alloWed to. If that person hasn’t been charged with a crime, that’s why we don’t know it, but don’t worry, robert muller does. So again, we’ve got the clear link. The only question at this point is Wikileaks who obtained the stolen dnc emails. that’s what this is about from russian hackers that has also been established is were those hackers working independently or were they working on behalf in coordination with or at the request of the russian government? See, that is the link that has yet to be firmly established.

Again, does it exist in my. In my view, based on everything we’ve seen, I. I’m confident that it exists, but it hasn’t been able to be proven yet so until that part can be proven. You can’t say that this story proves collusion here because it does not. The only collusion it proves is that the Trump campaign was colluding with Wikileaks to obtain these stolen emails that Wikileaks had obtained from these hackers who stole it, who directed them to steal it. We still do not have proof of that, but this is a big step. This is a positive step. This is a good thing. This is a story that you should go out there and be happy about. I’m not trying to rain on anybody’s parade and say, it doesn’t mean what you think it means because it does mean really bad things for the Trump administration, the Trump family, and everyone who worked with Roger Stone at this point.

More indictments will be on the way and my guess is that they could be on the way very soon. Another thing people are wondering is, will Roger Stone flip on president Trump? Well, Trump has bragged in the past, uh, that Roger Stone would never flip on him. Stone is insisted that he would never flip. He would never turn on Donald Trump. But then again, when you look at the guy and the cartoon villain ish photographs of him, he certainly seems like the kind of guy who would talk a big game, but then if you put them in a tiny room with an fbi agent or even Robert Miller himself and threatened him with a few years behind bars, perhaps, you know, this guy is fairly old, perhaps his last few years. The rest of his life behind bars, my bet is that you put enough pressure on him, doesn’t even really have to be that much, and this guy is going to start singing like a canary.