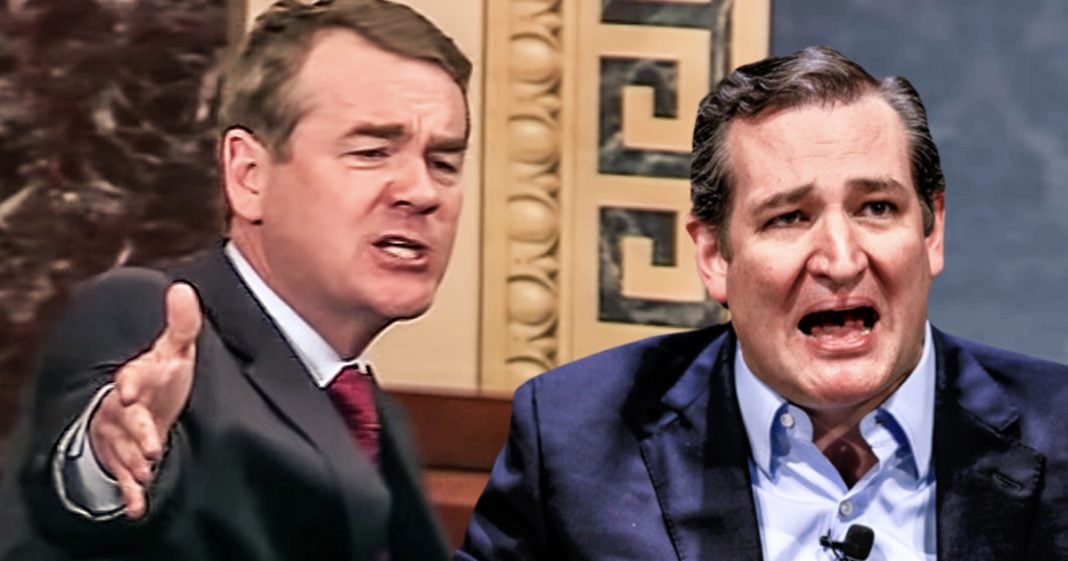 Republican Senator Ted Cruz finally got put in his place for his role in orchestrating the 2013 federal government shutdown by Democratic Senator Michael Bennet. The video has gone viral, and for good reason – it isn’t very often that we see fiery, passionate Democrats willing to call out Republicans on the floor of the Senate. Ring of Fire’s Farron Cousins discusses this.

It’s not very often that Republican politicians get held accountable for the horrible policies that they put in place, but that is exactly what happened to Republican Senator Ted Cruz just yesterday. Now. It didn’t happen while he was trying to go out to eat with his wife. It didn’t happen while he was combing his new beard. It happened on the floor of the United States Senate and it came at the hands were, should I say, the mouth of Democratic Senator Michael Bennett from Colorado calling Ted Cruz out for his role in the 2013 government shutdown and ted Cruz’s alleged sympathy for all the people affected by the shut down today, Michael Brennan than it wasn’t having it and he damn sure let ted Cruz know that. Here’s the clip.

Only thing that is necessary to pass a clean bill paying the salaries of every man and woman in the Coast Guard is for the Democratic senators to withdraw their objection. Is that correct? That’s correct. Thank you madam president. Senator from Colorado out of prison. I seldom, as you know, a rise on this floor to contradict somebody on the other side. I’ve worked very hard over the years to work in a bipartisan way with the presiding officer, with my Republican colleagues, but these crocodile tears and senator from Texas is crying for first responders are too hard for me to take there, too hard for me to take because when you. When the senator from Texas shut this government down in 2013, my state was flooded. It was underwater. People were killed. People’s houses were destroyed. Their small businesses were ruined forever, and because of the senator from Texas, this government was shut down for politics that he’s served to a second place finish in the Iowa caucuses, but were of no help to the first responders, to the teachers, to the students whose schools were closed with the federal government. There was shut down because of the junior senator from Texas.

So again, the reason for Bennett speech is because right before he started laying into Ted Cruz, Cruz had been talking about how Democrats want to play politics. Democrats want to punish people in the United States by shutting down the government because they don’t like the president. That is what this whiny little man child, Ted Cruz was saying on the Senate floor, and Ted Cruz been in the Senate for a while, thought that, you know what? Who’s going to stand up to me? Right? I’m big, bad ted Cruz. I got a beard now. I’m a man. I’m going to say these things and nobody’s going to come up, and then Bam, Michael Bennett, right? They’re shouting him down, forcing Ted Cruz to leave that office with his tail tucked between his legs and maybe possibly thinking twice about trying to come back to the Senate floor and blamed Democrats for something that the Republicans started.