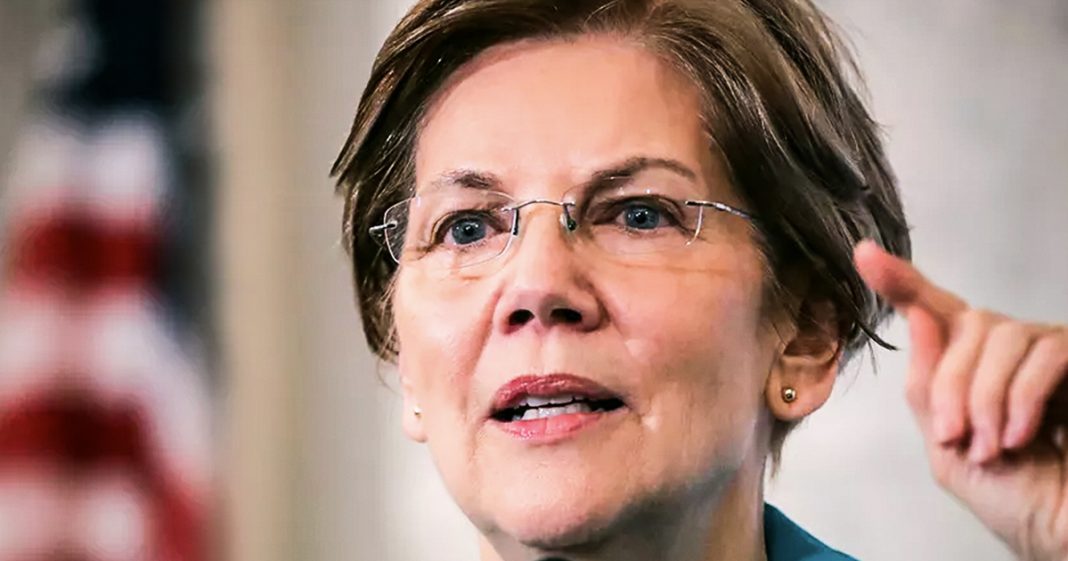 Democratic senator and 2020 Presidential candidate Elizabeth Warren has been meeting with economists for quite some time, and they’ve come up with an interesting plan to curb inequality and also raise some much-needed revenue for the country – a “Wealth Tax.” The tax would only impact about 75,000 families in the US, or less than 0.1% of the population, but it would raise trillions of dollars in the next 10 years. Ring of Fire’s Farron Cousins explains why this is a very good idea.

Democratic Senator and current 2020 Democratic presidential candidate Elizabeth Warren has unveiled one of her first policies that she is going to run on in the 2020 primary and election cycle. And that policy, which by the way was crafted with the help of two economists who she has been meeting with regularly to help craft or economic platform. The policy is a tax on wealth, essentially what they’re calling a wealth tax, which would affect people in the United States with assets totaling more than $50,000,000. Uh, this wealth tax that she is proposing is a two percent tax on that 50 million plus net worth two percent, not that much. And then if you have more than $1,000,000,000 in assets, the wealth tax goes up to three percent. Again, very small, right? Not to mention the fact that this would only affect about 75,000 households in our country have roughly 330 million people. Less than point one percent of the total population would ever have to worry about paying this wealth tax being proposed by Elizabeth Warren and

something we don’t usually see. It’s not just that she proposed like let’s do a wealth tax. So one percent on $50 million, a two percent. No, no, no, no, no, no. She actually laid out how she would do this and that to me shows how serious she is about her run for president now, whether you love her, don’t like her, you hate or whatever it is. You have to admire the fact that she did go the extra step and lay out how we do this because we have seen all too often for both sides really running in elections like I’m going to do a thing and people say, oh, I liked the thing. That’s a good thing, or that’s a bad thing. We rarely see the politician layout. I’m going to do the thing by doing this, but that is exactly what Elizabeth Warren did here and she says that she is going to increase the funding for the irs in order to allow them to better assess wealth and assets and all of that so that they can implement the tax.

She’s going to increase the audits of individuals making a more than 50 million or holding more than $50 million in assets, basically create a mandatory audit quota, and as we know right now, a recent massive report from Propublica says that the poor in this country are far more likely to be audited than the wealthy elite. They get audited at a larger percentage of population than the wealthy do. Elizabeth Warren’s trying to flip that and for good reason, you know the average person out there making $20,000 a year. Those aren’t the people who are lying on their taxes. Those aren’t the people who are trying to fudge things to make them, oh, less. There was the people that get refunds for God’s sake. She wants to go after the people who are hiding money overseas and in fact she even includes a mechanism that would prevent people from being able to hide money overseas and retain their US citizenship.

So she has got it laid out and regardless, this is a phenomenal plan, not just to help raise revenue here in the United States that could be spent on better things, which it’s estimated this would raise two point seven, $5,000,000,000,000 over the next 10 years, but it would also help with income inequality here in the United States, which is a horrible thing for the United States economy. When income inequality gets too great, the economy suffers, reducing that the economy does better, and that is the main goal here, to help the economy, to help the workers and to encourage employers, ceos, bosses, whatever, to spend more on their employees rather than just pocketing all the money themselves. You want to keep it all to yourself. You’re going to pay more in taxes. Similar to Ocasio-Cortez is marginal tax rate of 70 percent. If you want to do the right thing and help the United States and helping the economy give that money to your workers because if you put it in your pocket, you’re going to pay a price for being so selfish and greedy and harming the U. s economy, the, the other side of this obviously, and we’ve seen this because of Alexandria Ocasio-Cortez’s proposal of 70 percent marginal tax rate, is that Republicans are going to have a field day with this.

They’re going to go out there and say that, look at this, Elizabeth Warren wants to take more of your hard earned money. She wants to punish successful people here in the United States. This is socialism folks. Every single one of those things that I have just said will be said by a Republican about this plan, probably more than a dozen times, but that doesn’t make it true. Less than point one percent of the population would be affected by this and even those who are affected, that is a very, very, very small tax increase that would help the US economy. It would raise revenues that we could use to fix infrastructure. You know, put Medicare for all into place, help to pay for that. A fully enact debt free college, universal child care for free. It could do a number of things that would help the majority of people in this country. So regardless of what Republican talking points you hear, please understand that they are completely fake. They are made up by the wealthy elite who think it’s just horrible that they may have to pay a little bit more money because God forbid if they do, then maybe the top one percent wouldn’t own the same amount of wealth as the bottom 95 percent of this country.