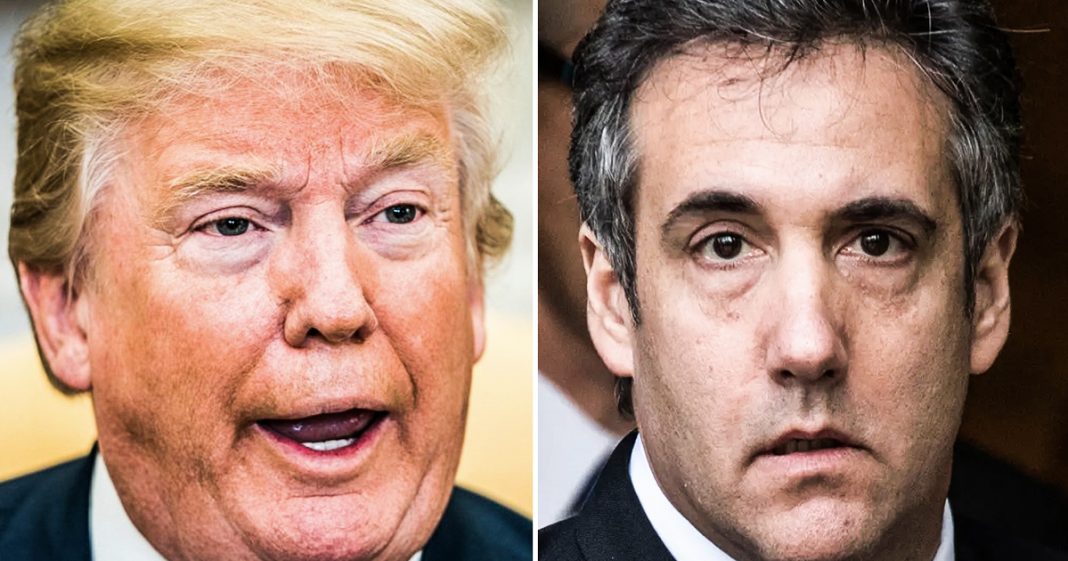 Donald Trump is playing a dangerous game of witness tampering with his repeated taunting and veiled threats aimed at Michael Cohen. Cohen has now delayed his testimony due to the perceived threats from Trump and Rudy Giuliani, and Cohen’s lawyer is calling for an investigation, censure, and possible impeachment for obstruction of justice. Ring of Fire’s Farron Cousins explains what’s happening.

If you’ve ever spent any time watching some of those true crime shows on tv and you see that, oh, the criminal left behind fingerprints here, they left their footprint, they made a sandwich and left their dna all over the place. They use the toilet and then flush it. Whatever it is. They leave evidence everywhere and you’re like, wow, how can somebody be so stupid when you’re trying to do something criminal? Well, the answer is just look at Donald Trump right now. This man is openly committing obstruction of justice, has openly tampering with witnesses in the investigation against him, all of which are criminal activities that he has literally committing in front of us. He’s doing it on twitter, and here’s the reason I bring that up. Michael Cohen, Donald Trump’s former lawyer slash fixer a, was set to testify before Congress in early February. He is now been forced to postpone his testimony to Congress because of the threats that he says he is receiving.

He and his family from Trump and his lawyers. Now, Trump did tweet out cryptically not that long ago that you know better watch out for father-in-law. Better check. Father-In-Law referring to Michael Cohen’s father-in-law, who Trump repeatedly says needs to be investigated because he’s pretty sure that, uh, the guy has been committing some crimes here that’s tampering with a witness that’s illegal. You cannot threaten them. You cannot threaten their family even if it’s threatening with information or investigations when you have the power to do that, that is considered a valid though veiled threat and that is illegal. And Michael Cohen’s a little freaked out now because of it, and honestly, rightfully so, but it goes even further than that, at least according to Lanny Davis, Michael Cohen’s attorney, Lanny Davis has now come out and said that he wants Congress to censure Rudy Giuliani. He wants an investigation in the house for obstruction of justice against Donald Trump, and if that bears fruit then possibly impeachment as a result of just the behavior they are in engaging in with regards to Michael Cohen.

Now, here’s the thing, Michael Cohen’s upcoming testimony was going to be very important. After all, we had that recent buzzfeed story. That Muller’s office then had to come out and say, no. There were some things in that that weren’t quite accurate and you know what we could have done when Cohen went to testify before Congress. We could just flat out asked him about that story and gotten the answers straight from Cohen himself and put an end to all the speculation, all of the, you know, did he didn’t. He did. Trump, didn’t Trump who knows conversations we could have gotten it right from him and now they’re taking that away and we know that Trump does not want those questions answered. And to me, that gives us an even bigger glimpse into that buzzfeed story as to what may or may not be true. There is only one reason that Donald Trump would want to threaten Michael Cohen and that is because he knows that Michael Cohen knows about the illegal things that he has done and Michael Cohen is going to spill the beans to whoever it is that is investigating Trump or whoever is questioning Cohen. And to be honest, at this point, given the number of conversations he’s had and the hours that he sat for testimony with Robert Muller, it’s pretty obvious that he’s already spilled all of the secrets that Donald Trump has been trying to hide for years.