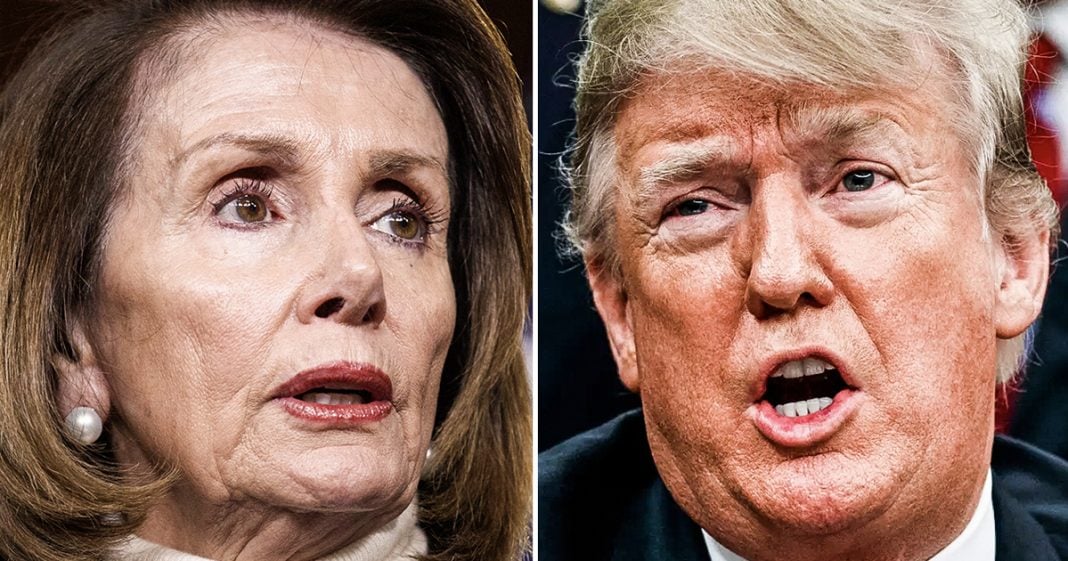 The State of the Union drama is heating up between Trump and Nancy Pelosi, and Pelosi appears to have the upper hand in this fight. Trump swore he’d deliver the address, but with Pelosi revoking his invitation to do so, he won’t be able to deliver it before Congress, and he has since conceded in this fight. There is precedent for postponing a SOTU address, and Ring of Fire’s Farron Cousins explains why Pelosi is doing the right thing here.

Now, at first, after she rescinded the invitation and said, well, then this isn’t going to happen. Donald trump and the White House, uh, was rumor that they were looking for other venues. Maybe they’re going to go do it in the Senate as Rand Paul, I believe it was, uh, had suggested maybe they’ll do it from the Oval Office. Maybe he’ll do it out in the Midwest, right? Wouldn’t that be a real thing? Uh, but then none of that happened. Trump said, we’re not looking at other venues. Nancy’s rescinded my invitation so I will not be delivering the State of the Union. The master negotiator, the dealmaker, the art of the deal, bowed down to Nancy Pelosi and said, thank you ms Dot Pelosi. You win this round. There is nothing I can do. How does that feel? Republicans honestly tell me. I wanna know. I wanna know how it feels to think that Donald Trump is the greatest deal maker in the history of deals.

Only to have him realize that he is not all powerful. He is not omnipotent, and he is not above the law. In this particular instance, he has to obey the rules. He has to do with Nancy Pelosi said he killed or could not do. And he didn’t even bother trying to find another way out of it. And you know why? Because Donald trump doesn’t care about the state of the Union address. He sure he likes to be on TV. He likes to hear people clapping, but he can go and do that anywhere and he knows that so he is not going to continue fighting this fight. One because he knows he can’t win. And two, because it’s not something he actually wanted to do. Now, this is not necessarily without precedent. Sure. They’ve never. The House of Representatives have never in the history of this country, we’re sending an invitation to deliver state of the Union.

That is something that is unique. However, not giving a televised State of the Union or postponing a state of the union to something that’s happened before. Now in the past, I’d mentioned that John Bayner did it in 2011 to Barack Obama. But I do have to say that I was wrong about that. It was a jobs speech that Obama wanted to give, that John Bayner postponed a. So it was not the state of the union. So my apologies on that. However, Ronald Reagan postponed his own state of the Union address in 1986. Following the challenger disaster, Jimmy Carter decided to just give his last state of the Union address in writing. He didn’t even want to go on TV. He said, here, here’s the speech, do what you want with it, because I don’t have to do it in front of a live audience, so yeah, presidents in the past have been like, sure, whatever.

I’ll delay it. I’ll hand it to you in writing or whatever. There’s bigger things happening in the world, so to act like, oh my God, we’re not getting a state of the union. This is. This is crazy. It’s not crazy. They don’t have to do it. They don’t have to do it every year. The rule only states that the president will periodically submit a state of the Union address Yo report essentially to Congress. That’s it. They, again, as I’ve said in the past, they could request it once a week. He could decline it, they could request it every six months. They could request it every two years. They can do whatever the hell they want to do with it, and trump understands that now, or at least his advisors have told him that there is nothing you can do to win this fight. So the best thing you can do is back down and probably go start another fight with somebody else that you might be able to win because you damn sure, as evidenced by the government, shut down and now the state of the union, you damn sure not going to win a fight against Nancy Pelosi.