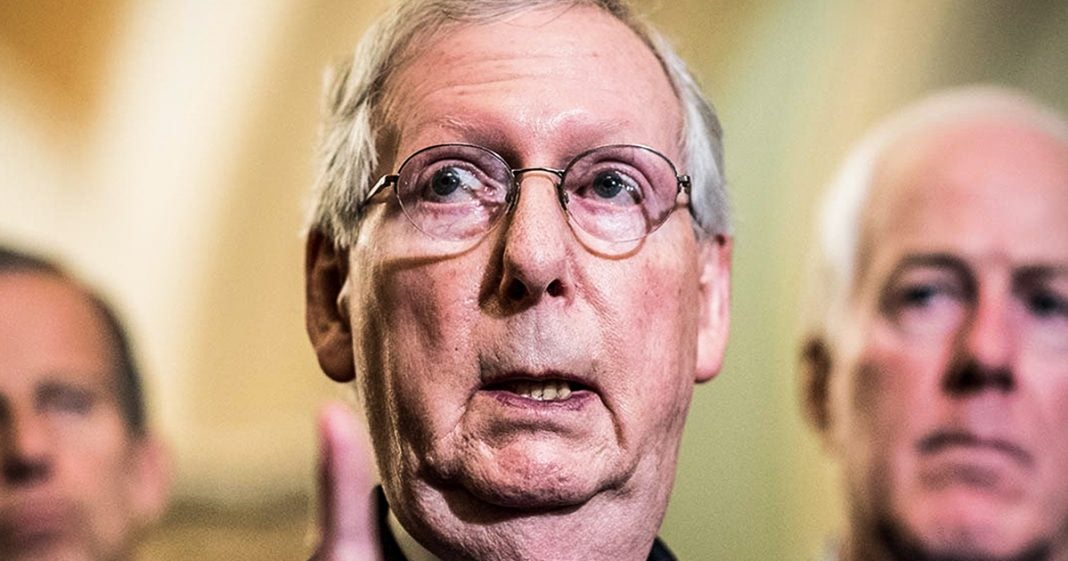 Mitch McConnell officially owns this government shutdown. For the fourth time in recent weeks, McConnell has single-handedly blocked a bill that would have reopened the federal government and allowed hundreds of thousands of government workers to finally start receiving a paycheck again. This man is acting like a dictator in the Senate, and it is time for Democrats to start calling him out publicly for his actions. Ring of Fire’s Farron Cousins discusses this.

On Wednesday, Mitch McConnell, for the fourth time, blocked a bill that would have reopened the federal government, had the Senate passed it, and Trump signed it. This time it was a bill brought by Democratic Senator Tim Kaine, to reopen the federal government on Tuesday of this week. It was a house bill that had already passed to reopen the government that Mitch McConnell Block, so this guy is just doing everything he possibly can as frequently as possible to prevent the federal government from reopening were more than 30 days now into this partial government shutdown. Federal workers are about to get there. Second paycheck, that’s going to say $0 and zero cents this coming Friday, and Mitch McConnell is the one human being standing in the way of reopening the federal government at this point, even though he’s on video saying he’ll take full credit for it. This is his shutdown a. This is not Trump shut down anymore. At least not entirely. This is Mitch McConnell’s government shutdown. He is the one person who continues to stand in the way of getting 800,000 people in this country, their paychecks. That’s Mitch McConnell. He is the one who is doing this. Democrats in the house have repeatedly, at least six times passed legislation to reopen the federal government. They have even discussed increasing border security funding as part of those measures to reopen the government just not providing funding for the wall and even that is not good enough for the Republicans. Even though Trump tells us, hey, we’re stopping people left and right on the border. Our security is phenomenal, but we still need a wall. None of this makes any sense. Okay, let’s be 100 percent clear about that. Nothing that’s happening right now in Washington dc makes any sense, but what’s especially confusing is Mitch McConnell himself. I mean this guy is, you know, going to be facing reelection very soon and yet he’s the one, the one guy standing in the way of getting people back to work, getting the federal government working again and he doesn’t seem to care. Maybe it’s because Mitch McConnell has been in the game so long. He understands that American voters have a very short attention span. They will move on to the next outrage within days of the federal government reopening and they’ll forget all about this 30 plus day government shutdown. That is a very sad reality, but it’s a reality that Mitch McConnell knows and he’s hoping to use it to his advantage and that’s why he can play games with 800,000 people’s paychecks. That’s why he can play games with the economy that’s suffering from people not being able to go to national parks. People not being able to go to museums, trash piling up the irs not being able to fully process people trying to file their taxes. That’s all on Mitch McConnell, but this guy is 100 percent certain that every one of you out there, we’ll have completely forgotten about this by the time the 20, 20 election rolls around and unfortunately based on history, based on doing this for 15 years and seeing outrage after outrage that voters forget about very quickly. I’m inclined unfortunately to think that Mitch McConnell is correct about American voters attention spans.