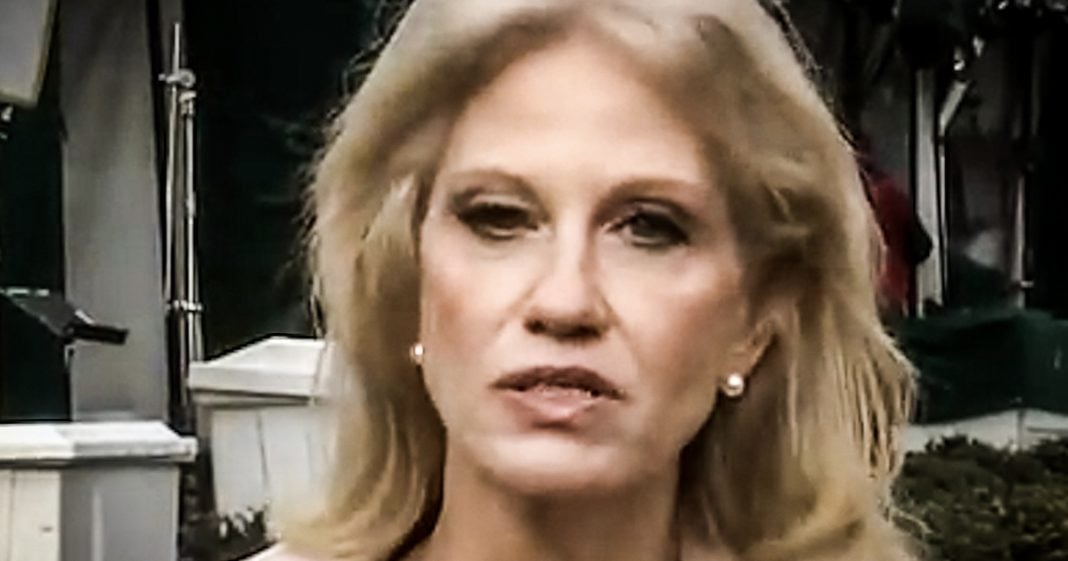 During a brief exchange with reporters this week, Kellyanne Conway grew visibly angry when one reporter asked her about Trump’s “wall.” Conway wasn’t mad about the question, she was mad about the language and doesn’t like that people are still calling it a “wall.” She wants people to call it a barrier or steel slats, as Trump has said. Ring of Fire’s Farron Cousins discusses this absurdity.

White House counselor, Kellyanne Conway has this uncanny ability to not answer a question even when she actually answers a question, to be honest. Sometimes watching her do these linguistic gymnastics when answering your question is quite remarkable. Sure. We know she’s lying and we know she’s deflecting and trying to change the subject and go down a different path. But the way she does it, I mean, you got to admire it just a little bit. Take for example, what happened earlier this week when Kellyanne Conway was asked by the White House press corps, uh, about the status of trump’s wall. The government shut down and all that they wanted to know about the wall and this is what Kellyanne Conway had to say.

Do you have the poll? Do you have the poll question now? But I just want to see the question. The question was, is the wall or the government shut down? And so why would that be the question? Why is that a good question? I’m asking you why you’re still saying, well, when the president has said, I’m asking why you and the polling questions respectfully are still saying, well, when the president said you can call it whatever you want, call it steel slab barriers called well, I was in the situation room when he said to, when he said to leader Schumer, minority leader Schumer that you can see that he has. That’s a great slogan, builds a wall and crime will fall. We know that’s true. Again, are we afraid of that? Right? He calls it wall seals, slot barrier, physical barrier, anything. In other words, we need a physical barrier that you can’t crawl under.

Climb over, drive through, or walk around. That’s why I have doors in my house. I assume you do also and they actually have locks on them. In other words, it’s. It’s to protect the people and the inside and so I don’t understand why it’s so difficult to get beyond what you all want to make. We’ll make was do you want to make a four letter word wall? When the president said to Chuck Schumer very specifically, and the president has said many times since publicly call it what you want to call it, but let’s secure our border

so it’s not a wall except it is a wall and Donald Trump says don’t call it a wall, but also trump says, call it whatever the hell you want to call it. But Kellyanne says, don’t call it a wall. Call it a steel barrier. Steel slots, a border barrier. Uh, you know, an invisible fence who gives a shit what you call it. Just don’t call it a wall, right? That’s what she’s telling us here. None of that even makes any sense because she does on multiple occasions in that little minute long diatribe contradicts herself with every other thing that she says like, this is different than this, which is different than this, which contradicts that. It’s insanity. This woman has no idea what she is talking about. All she is trying to do is redirect the conversation to something else you want to ask me about policy, but I want to talk to you about semantics. That’s what she did there, and now we’re on the thing like where your home has doors. So why not a border wall? That’s how desperate and stupid this administration has gotten. You have doors in your house, so why not have a border wall? Well, for starters, my house is my personal property.

The border wall is separating a country. That’s what a border is. It separates a country that’s not anybody’s personal property, right? That’s land. That’s earth. We cannot just put up walls and say, you are not allowed over here. When legally they are allowed to come over here through the correct avenues. However, you’re also talking about literally taking private property from American citizens in order to have the space to actually build the border wall. So you’re talk about doors and you know walls at your own home. You’re literally taking people’s homes or want to take people’s homes, would have to take people’s homes in order to build your stupid wall slash steel slat slash border barrier Kellyanne. It doesn’t matter what people call it. It does not matter. What matters is that the majority of people in this country do not want it. They want our government reopened and they want the government reopened without providing the president a single dollar to build whatever the hell it is. You want to call it along the southern border.