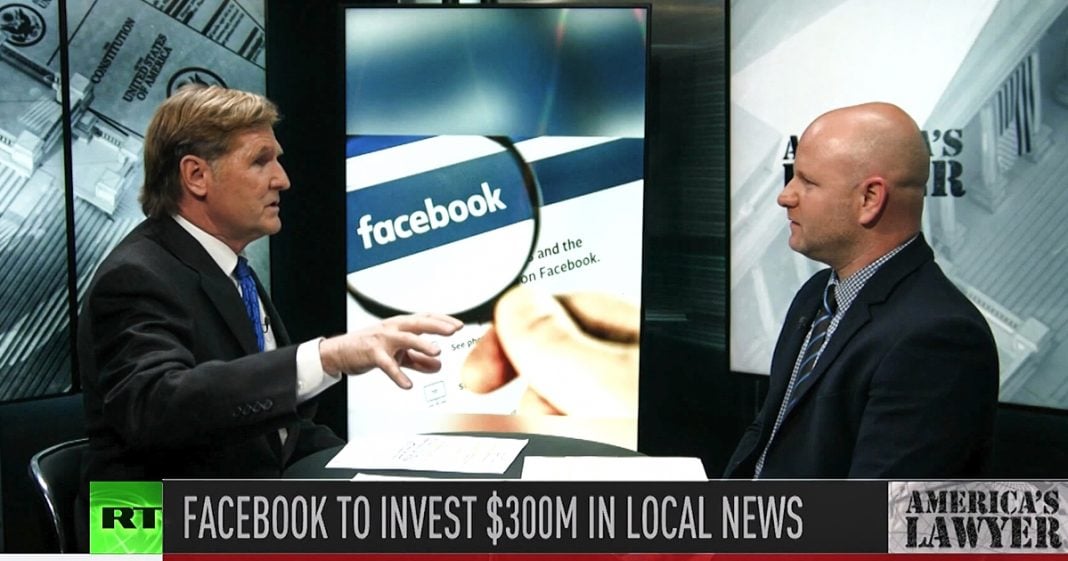 Via America’s Lawyer: Mike Papantonio and Trial Magazine Executive Editor Farron Cousins take a look at Social media giant Facebook, who recently announced that it would be investing $300 million into local news.

Mike Papantonio:             We’ve learned in recent months that there was virtually nothing Facebook users could do to stop Mark Zuckerberg from selling their private data, including their private messages to third parties. The company has routinely violated our privacy rights and now they want to buy up local media outlets to help control the bad coverage the company’s getting. Farron Cousins with me from the National Trial Lawyer Magazine.

Farron, you know, this story I saw on Reuters, you found it in Reuters. This looks like a press release that Reuters, it looks like the reporter for Reuters never thought through what does this really mean? He just takes this oh wow, this is good. They’re going to spend 300 kazillion dollars and they’re going to help. The word is we’re gonna help the news agencies. What is your, I mean your, your take on this was exactly mine. Let’s talk about this one.

Farron Cousins:                  This story is, is frustrating, but it’s absolutely something that people need to understand and read past these headlines, past this fluff piece by Reuters, which again, usually great Reuters is. This was a failed piece on their part because what Facebook is trying to do here is the same thing we’ve seen corporations do for decades. They want to come in to local news organizations, local new stations.

They’re not going the corporate owned network route, so they go into the local ones and they say, listen, we’re going to help you. We’re going to give $300 million dollars to help you. You can hire journalists with this. We’re going to teach you how to use social media, how to attract more advertisers. Facebook’s going to be your best friend.

Farron Cousins:                  Well and here, here’s the thing too, just to kind of hit on that, you know, censoring far left far right, whatever it is, it’s because some of those on the far right say things that advertisers don’t want to be associated with and those are the far left are the ones who actually go in after the advertisers because they’re typically corrupt companies.

So Facebook doesn’t want to make the people mad who paid their bills, who buy our data. So that’s part of the reason there. It’s all about the money too when you follow it on that trail, but this, this $300 million to local newsrooms, to me, they’re trying to do the Sinclair model.

Farron Cousins:                  Because Sinclair has become hugely influential, pushing their own agenda through the local news stations. They don’t have to buy the MSNBC or Fox or CNN. They go local. Facebook saw that thought, hey, this is cheaper. This is more effective because people trust their local news more than they do cable.

Mike Papantonio:             News it local. I mean the first time you learn in journalism school, local, local, local. Okay. Let me put this in perspective how dangerous this is. We were trying to do a story, through a site, that where we were publishing a story about the addiction problem in the United States and the potential rehab possibilities. Now they, they didn’t, they wouldn’t publish the story. Facebook said, no, this doesn’t meet our standards. Veronica Brewer, the social media manager. Here’s what she says.

Mike Papantonio:             Yeah, got… Excuse me. She gets the message from Facebook and from Facebook this is what she says, that they had issues trying to post the latest article that we posted on our Facebook page. It seems our page is not authorized to run content that refers to addiction, help and recovery. This is a new Facebook regulation. What is that? Okay.

We can’t publish this because the article deals with addiction, help and recovery. So somebody in Facebook says, no, that’s not news, and so they don’t run this article where we’re talking about how the industry is killing 150 people a day and that the only avenue that they have is to be able to put together resources to help these addicts and that the companies should have to pay for it. But Facebook says, some bird bird brain up at Facebook says, no, we can’t do this because it deals with addiction, help and recovery.

I don’t even know how to respond to it, but these are the people. These are the Facebook types that we’re going to, you said earlier, we’re going to have a Facebook network. Facebook news network, and when you and I do a story that they don’t like because it offends their politically correct mind, they’re going to say, I’m sorry we can’t do that because you know what, it deals with addiction and recovery.

Farron Cousins:                  I think to me they’re hiding behind the veil of political correctness. We don’t want to be too far right. We don’t want to be too far left and this note you’ve just read, to me, that kind of proves it. What they’re worried about is making the people who pay them money angry. You know, kind of what I, what I said earlier is they, they know that they could probably get a lot of money from these drug companies. Hell those drug companies are the same people, they’re going to be out there allegedly courting for these local news stations.