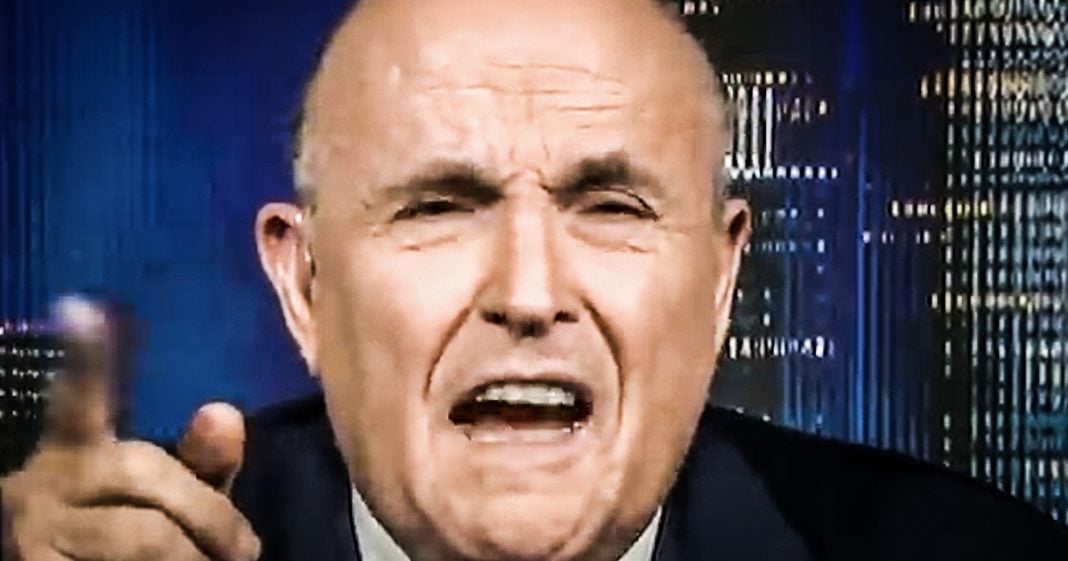 Officials inside the White House are panicking about Rudy Giuliani, and several have asked the president to forbid his attorney from appearing on TV ever again because “nothing good will come of it.” But there are others in the White House who want Trump to do more than just banish Rudy from the airwaves – Ivanka Trump and Jared Kushner are reportedly asking Trump to fire his lawyer. Ring of Fire’s Farron Cousins explains what’s happening.

Officials inside the White House are starting to freak out right now over the fact that Rudy Giuliani cannot be trusted to go on television and accurately or really even just adequately support Donald Trump. Now, this came in response to Giuliani’s recent TV appearances and other media interviews where he kind of let some things slip that he probably shouldn’t have said some things that he later had to clarify, such as? Yeah, he was trying to build Trump tower Moscow throughout the entire campaign. Uh, we do know now also that, that is true. Um, lots of information has been coming out about that for the last 48 hours. But, uh, also Giuliani saying, yeah, I’ve heard all the tapes and I didn’t hear him tell Cohen to go lie. Oops. I mean, there’s no tapes. Well, there are tapes, but they didn’t say that I should probably leave now. I’m hurting things.

So yeah, White House officials and have every right at this moment to be freaking out. So according to NBC News, one White House official that they spoke with said that they’re trying to tell the president to forbid Rudy Giuliani from doing any more media interviews. They don’t want him on TV anymore because they understand it’s not helping anything. In fact, that’s actually what they told the president. If it’s not gonna, do any good for us, then why are we even letting this happen? Uh, they’ve said that, you know, his crazy incoherent rants are certainly not helping the president’s defense, but that’s just one group of officials, possibly even just one official on the other side of the White House. You have Ivanka Trump and jared kushner. And according to Vanity Fair’s Gabriel Sherman, those two are actively telling Donald Trump that they, he just needs to fire Rudy Giuliani once and for all, get it over with.

Get rid of this guy. He is doing so much damage to you. So please Daddy, just fire him today. Now listen, I would love it if networks just had Rudy Giuliani on 24 hours a day saying all of the stupid things that we know he wants to say. It’s funny, it hurts the president and it gives us all a good chuckle as a result, but if you’re looking at this from a pure legal standpoint and you’re saying to yourself, I’m a lawyer and I’m watching this guy as a defense lawyer, absolutely bungled the case for his client like Rudy Giuliani at this point. It’s likely the man could be sued for legal malpractice. He’s been so damaging to Donald Trump. So I understand their concern and I understand their wishes and the part of me, uh, that understands the law is looking at this and saying, yes, Giuliani needs to be fired.

Giuliani should’ve been fired a very long time ago. In fact, Giuliani never should have been hired, so I understand if they want to fire him and I don’t disagree with him that he needs to be fired or at least banished from our televisions for forever. But at the same time, I also am loving every time Giuliani goes on tv because again, he’s making things so much worse for the president. He is giving us little tidbits of information that he’s not supposed to be giving us, that reporters then go and they dig into these and they find out, oh, even though you tried to clarify it and say that’s not what you meant. We verified that it is in fact what reality is. So Giuliani has been very helpful in helping to expose a lot of the things that the Trump administration did or has done. So getting rid of him from our TVs could cut off that valuable source of information. But again, if you’re only looking at it from the legal perspective than yes, Trump needs to fire Giuliani and he needs to do it before this guy makes his case so much worse.