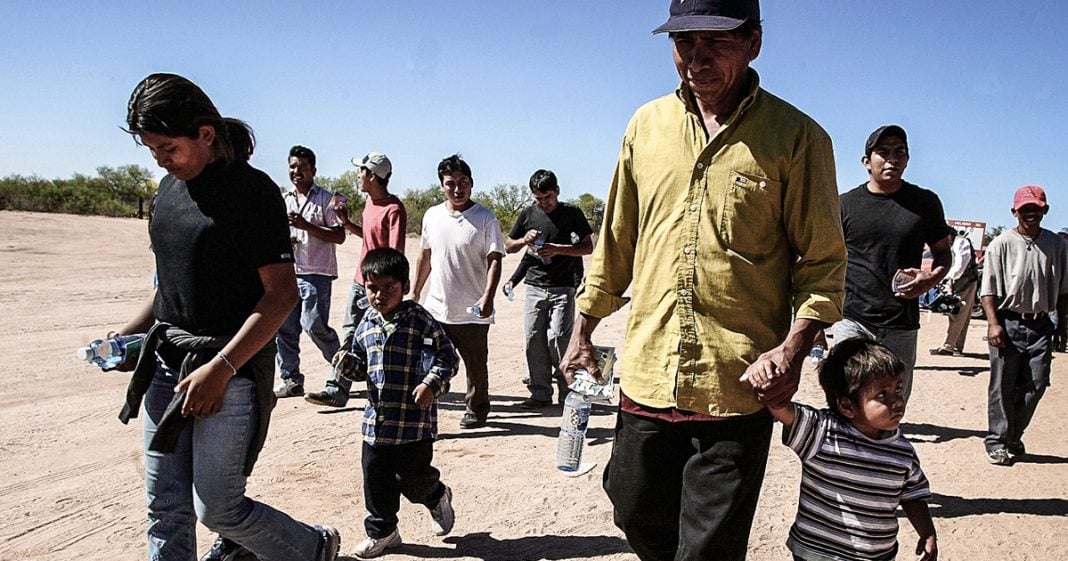 A group of volunteers for the group “No More Deaths” have been convicted by a judge and are currently awaiting sentencing. Their crime? Leaving out water and supplies for migrants attempted to cross the US/Mexico border by way of the Sonoran Desert. People die on this journey from exposure, and now we are criminalizing helping them. Ring of Fire’s Farron Cousins discusses this.

Here is an incredibly disgusting story that I think everybody needs to hear about. A recently a judge convicted for volunteers from the group. No more deaths. Do you know what their crime was there? Crime was leaving out water and food and the Sonoran desert near the border between the US and Mexico, leaving out food and water so that immigrants crossing over could find it, get it, get a little bit of sustenance and maybe not die from exposure in the desert. That’s what they were doing. They left out food and water and this judge in this case decided to convict them and now those four volunteers for this group are facing up to six months in prison for doing nothing more than trying to make other people not die and now they’re going to go to jail. There’s actually five others that are currently awaiting trial, and if they’re going before the same judge, you can pretty much guarantee that those five will also be going to prison for an undetermined amount of time.

But here’s the thing, we have seen too many people die after being taken into custody. People crossing the border and I don’t want to hear, well, they crossed illegally. They shouldn’t do that. That doesn’t matter. Does it? Does it really because that’s a misdemeanor. I mean, you know, it’s Jay walking essentially and we want them to just die in the desert. We want their kids to just die, drop dead before they can even be taken into custody or when they get taken into custody and then ignored by the guards. Ignored by the medical staff. Parents losing their children, children losing their parents. Is that who we are? The answer is yes it is. This is 100 percent who we are as a country now. This is what we do and it’s disgusting. It’s despicable in. It has to change and so far up to this point, we had seen the court system’s working in favor of humanity against the harsh policies of the trump administration, but apparently those days might’ve been numbered because here we have four people whose only crime was trying to help other human beings get a little bit of water or get a little bit of food.

My question from this point forward is, what’s next? You know what’s next from here? If you stop with the panhandler on the sidewalk and give him a dollar, are you gonna? Go to jail now you’re going to get arrested for that. If you hand them a sandwich, is that a felony or are you gonna go to jail for the next year of your life because you were trying to help a human being. Where do we draw the line? Is it only with immigrants or is it with anybody who needs help? You know, for, for people who like to claim that, oh, this is a Christian nation, even though it’s not, we certainly don’t act very Christian like dewey, you know? I’m pretty sure the overall takeaway from the Bible is be a good human being to other human beings and that’s all these people with this no more deaths group we’re trying to do. They were trying to help people. They were trying to prevent death and now they’re on their way to prison for it because that’s apparently what we do in the United States today.