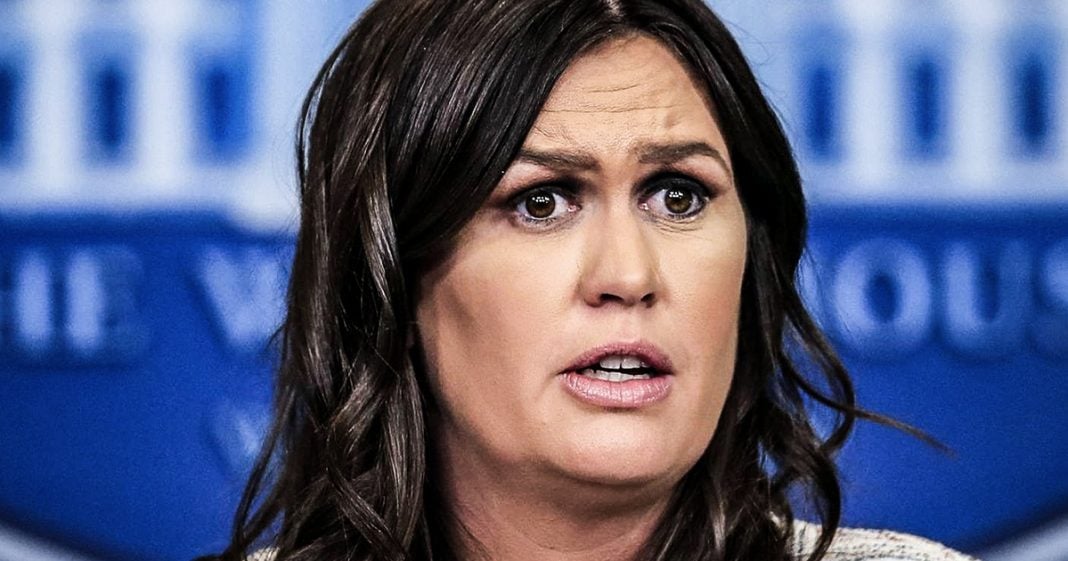 Not long ago, Sarah Huckabee Sanders’ staff said that she had halted her press briefings because Trump himself was talking to the press more, so it wasn’t needed. It didn’t take long for Trump to contradict their statement, and he said on Twitter this week that he was the one who ordered Huckabee Sanders to stop the press briefings because members of the press are allegedly too mean. Ring of Fire’s Farron Cousins discusses this.

So I’m sure by now most people have noticed that the Sarah Huckabee Sanders has not been doing her daily press briefings for quite some time now, several months actually, and the few times she does get behind that podium showing answer questions for a few minutes and then walk away. So she’s basically just not doing her job even though she’s still drawing a paycheck. But here’s the thing, not that long ago, her assistant, a Hogan Gidley came out and said, hey listen, the reason Sarah Huckabee Sanders is not doing these press briefings is because trump’s been talking to the press a lot more. So you know, he, he’s doing it himself. Basically. She doesn’t need to come out to the podium when you’ve already talked to the president for the last 30 minutes. He got all the information you needed. We don’t want to waste anybody’s time. That is what her assistant again, Hogan Gidley officially said as the reason she’s not doing these decent enough reason.

Not exactly true, but that’s what we’re used to out of this White House. And then Donald Trump came along and completely contradicted that entire rationale for why Sarah Huckabee Sanders is not speaking to the podium, and he did it as he always does through a tweet. And here it is. The reason Sarah Sanders does not go to the podium much anymore is that the press covers her so rudely and inaccurately in particular, certain members of the press. I told her not to bother the word gets out anyway. Most will never cover us fairly. And hence the term fake news. Here’s the thing, first and foremost, let’s talk about semantics for a moment because you can’t say in particular certain members, if you’re going to talk about particulars, you actually have to name names. You have to give us organizations. That is what particular means, but you can’t just say in particular some people that that’s not even grammatically correct.

You Moron. Secondly, who’s out there being rude to her, who’s who’s covering her negatively. I know a lot of people are covering or negatively, but that’s because she lies to them and they call her out on her lies. That’s not being rude, that’s doing their jobs. You know, I’m getting sick and tired of this buffoon sitting in the Oval Office, you know, the most respected room essentially, and this entire country, and it’s inhabited by this ape man who sits on twitter all day watching Fox News telling us lies, and now he’s lying again about Sarah Huckabee, sanders and the media. The media is the enemy of the people. The press is the enemy of the people. They’re horrible to her. There’s so mean to me. They’re doing their jobs. They’re out there telling us what is real and what is not. When you do something good, they will talk about it like the bump stock ban.

Even I gave you praise for that because that was a good move. When you screw up, they’re gonna. Call you out on that too, and unfortunately for you, Mr Trump, you have screwed up a hell of a lot more than you’ve done something correct. You screw up on a daily basis. You say stupid things. You act like an idiot. You alienated our allies and you embrace our enemies. There is nothing positive to say about you or Sarah Huckabee. Sanders, if you want positive coverage, if she wants positive coverage, stop lying, tell the truth and get out there and do something that’s going to make the world a better place. So far you’ve been unable to do any of those three things.