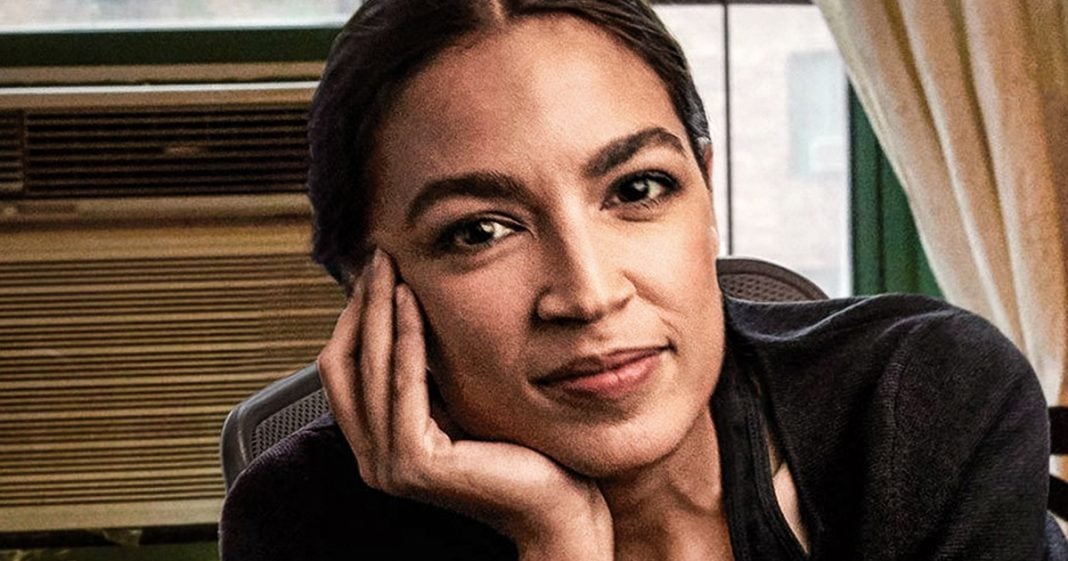 Billionaires, CEOs, and other people who have devoted their lives to money are gathered in Davos, Switzerland, and they all seem to have one thing on their mind right now: Representative Alexandria Ocasio-Cortez. The billionaires at the summit are freaking out over her idea to raise marginal tax rates on income over $10 million to 70%, which is actually not as high as it had been in the past. Her policies are popular, and that’s what scares these billionaires, as Ring of Fire’s Farron Cousins explains.

Right now in Davos, Switzerland, you have the World Economic Forum. We’ve got millionaires and billionaires, financier’s, hedge fund managers, and other people who have devoted their entire life to chasing dollars at this world economic forum and you know what’s on their minds according to interviews they’ve given to reporters, representative Alexandria Ocasio-Cortez, these powerful men and women over there, the millionaires, billionaires, they fund political parties all over the planet, including here in the United States, both Republican and Democrat, and they are all freaking out right now because of Alexandria Ocasio-Cortez is proposed. I mean her idea, it’s not even proposed, but her idea to raise marginal tax rates in the United States to 70 percent on any income earned over $10,000,000. That terrifies them. She terrifies these elite financier’s meeting over in Switzerland right now. They can’t stop talking about her. They can’t stop talking about her proposal and not because they think that she is, you know, some idealistic person, but because they understand that she hit a nerve with the American public and they actually support it.

Fifty nine percent of people in this country, including 45 percent of Republicans do support raising the marginal tax rate to 70 percent. They like that idea. They liked the idea of millionaires and billionaires having to give a little bit more in tax money to help protect this country, whether it’s increasing funding for EPA or FDA or police departments, teachers, medicare for all debt free college proposals like that, food stamps, all of that. We could fund a lot of it by just raising that marginal tax rate to 70 percent, which is actually lower than it has been historically here in the United States, but that’s what they’re talking about. That’s what they’re telling reporters right now. And again, this is not just republicans who are saying this. There are some Democrat donors over in Davos right now who are telling reporters that they don’t like this and that I’ve given a lot of money to the Democratic Party and trust me, this isn’t ever going to happen.

If a, if a Democratic candidate runs on this in 2020, it’s going to be a death sentence. Ain’t gonna happen. Um, specifically here, uh, we’re talking about Glenn Hutchins actually is the man who said that, uh, he is a founder of a private equity equity firm called Silver Lake. And he told reporters, yeah, I’ve given over $100,000 to the Democratic Party and I can tell you that they’re not going to run on this in 20, 20. Well, Mr Hutchins, we appreciate your money. We’d prefer if you just kept it out of the races altogether because we don’t want your millionaire billionaire money corrupting the Democratic Party anymore. Those days are. But here’s the even better part. We don’t have to have a presidential candidate that runs on that platform of raising the marginal tax rate to 70 percent or 80 percent or 90 percent. Do you know why? Because the president wouldn’t be the one to put forward that policy proposal that would be done in Congress.

CIGA ahead, think ahead and think that you have a presidential candidate in your pocket, a presidential candidate who’s not going to do this. Because if the voices are loud enough, the Democrats in Congress will 100 percent make this happen. And then force a Democratic president or possibly a republican president to either vote it down or approve it, and only one of those things is going to appease the American public. Voting it down would actually show that no American politics is in the pockets of millionaires and billionaires and good luck convincing the public to support you. After that, I can promise you it would never happen. But to me, what’s. What’s interesting here is the fact that we have these hugely powerful people, wealthy people who think they have power over there in Switzerland, and the only thing on their mind is this young representative from the Bronx who is here in the United States, forcing issues, getting people to pay attention, and more importantly, getting people to support her ideas both on the left and on the right.