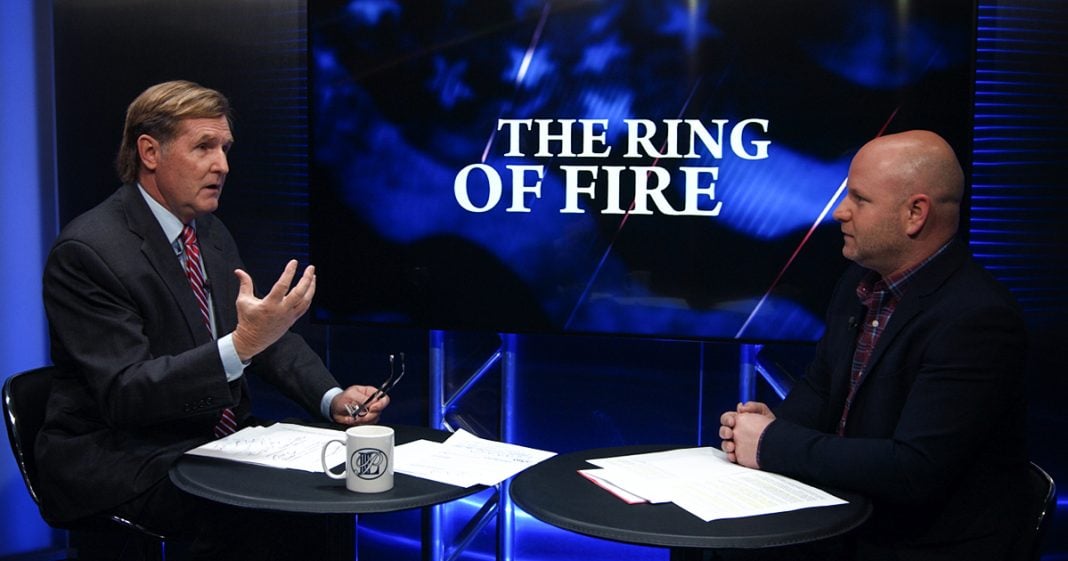 Facebook has announced plans to spend $300 million “helping” local newsrooms with journalistic efforts, but what they are really doing is trying to buy positive coverage and bury any negative stories about the company. This is going to have a chilling effect on journalism throughout the United States, as Ring of Fire’s Mike Papantonio and Farron Cousins explains.

Mike Papantonio:             Facebook announced that they’re spending $300 million dollars on local news stations across the country and the media has completely missed what the story’s really about. You know, Farron, I looked at this Reuters story and I had the same reaction you did. It’s like this reporter, they’re like, there’s no critical thinking. When I read this story, the Reuters story I almost said, is this, I thought it was a press release, you know? Okay, so nobody gets what Facebook’s really up to here. Take it from there. Let’s talk about it.

Mike Papantonio:             Okay. What’s really happening here is Facebook is under the gun. I mean everybody’s catching up with who Mark Zuckerberg really is. Okay. We find he’s working for the government just like Bezos is doing. He’s collecting our phone information, our text information. He’s gathering up as much personal information as he can about us to spy on us. Okay, that’s the first thing. And if you watched the hearings that they had in Congress, they were a joke.

Mike Papantonio:             Sinclair, yeah. Sinclair is doing the same thing. They watched what Sinclair was doing. So they said, hey, this is a great idea, let’s go ahead and do it.

Farron Cousins:                  Well, it’s a lot like you know the Sinclair now they have that, The Bottom Line with Boris, and he comes on. He looks like a guy that’s probably in your local newsroom, given you this fact free opinion and before that we did segments on the guy, it was a Mark Hyman.

Farron Cousins:                  Many years ago was the same way. Executive at Sinclair, but most people thought he was just a local guy giving them a… Pretty soon it’s going to be Mark Zuckerberg coming in giving you…

Farron Cousins:                  Right, but this is absolutely influence. They’re buying influence by giving this $300 million to these local news stations because Facebook knows polls show that people trust their local news more than they do the national news.

Mike Papantonio:             In journalism school, the first thing you will learn is local, local, local. Okay. They did the same thing in, in the UK last year it was $6 million dollars that they put in because the UK was all over them. Look, if you’re hanging out on Facebook nowadays, first of all, you’re kind of old, you know, because I mean people kind of understand that it’s kind of yesterday’s news. It’s getting skewed really, really old, but the, the thing is not to understand that this guy has become the gatekeeper of all of our ideas. Let me give you an example.

This happened with us, as a matter of fact. We do stories, we have a, we were doing a story through Drug Safety News, which, which is stories that we send out through Drug Safety News about drugs that are killing people and why we ought to be aware that they’re killing people. So we try, we did a story on the opioids. It was telling the story of how the opioid crisis has progressed, how people are dying at record levels and how there’s maybe some hope for them because they can get care.

So Facebook would not run it. They wouldn’t run it. And here’s why. They said we had, that they had issues trying to post the latest article on the Facebook site because the page is not authorized to run content that refers to addiction, help and recovery. Okay. I read exactly what they said. We can’t run. we have our matrix or whatever that they use. Some bonehead snowflake in wherever they live says, oh, we can’t run this because you’re talking about addiction and recovery and that’s all the information we got.

But here’s the point. They’ve become the gatekeeper for ideas, Farron. I mean, you know, they, they, if you’re too far left, we can’t use that because it doesn’t fit into what we stand for. If you’re too far right, we can’t use that. The notion of ideas is what projects any culture, whether they’re good ideas or bad ideas, whether their ideas that you agree with or don’t agree with. And Zuckerberg is the guy that now is the, he’s like Oz. Zuckerberg wants to become Oz and he says, if my people don’t agree with it, we don’t know who his people are. I mean, I visualize this, you know, room full of 18, 19 something’s sitting there saying, oh, this is offensive to me. Well, it’s an idea and people need to have it out there.

No matter how… Look how long have offensive ideas been out there? If we couldn’t, if we couldn’t project offensive ideas, comedy would be dead because comedy has evolved that way. Media in every regard, his evolved that way. It’s not bad. It’s just we don’t stop it because some and I, you know, I use this term snowflake pejorative in another way. I think there’s snowflakes to the right and I think they’re snowflakes to the left. It’s somebody who has so little world experience.

They’re the people who grew up mommy and daddy putting on the back of their car, my kid is an A student, or when you know, my kids, the smartest kid in the… They grew up with that mentality and they grew up in a culture that is so politically correct that they have stopped thinking and that’s what Facebook represents.

Farron Cousins:                  We’ll see and I disagree. I, I do think there’s obviously people sitting there saying, well, this is good, this is bad. But I think rather than it being the young kids making these decisions, you know.

Farron Cousins:                  I, I think it’s more of the, you know, regardless of age, the people sitting there and the, you know, expensive suits saying this story is going to piss off our advertisers. Let’s kill that. This one, maybe it’s a little too extreme. They use some words we don’t like. That’s gonna make our advertisers mad. And with our story, people need to understand this was about the opioid crisis and how it’s affecting women and killing more women than it is men. That’s what it was about.

Mike Papantonio:             I mean it’s, it’s been stories where we have been, we’ve attacked the right because remember the militia day’s stories where we did the militia stories. Oh we can’t do that because you used the word terror and then we would talk about the left and, and oh we can’t do that because whatever. And we have some, now I hope you’re right, because if I’m right, and I really, I genuinely hope you’re right.

It’s not the vision I have, but you know, you and I disagree on a lot of things, your vision is that this is purely corporate. My vision is that we’re raising an entire generation that has been captured by this trap of political correctness that they can’t, they’re afraid to speak. Is this appropriate? Is this inappropriate? I mean, come on. Yeah, there’s a lot of inappropriate things, but we’re grownups and we worked through that. I hope, I genuinely hope you’re right.

Mike Papantonio:             Government will not grab Facebook. The only way we grab control of it is to say, you know what, it ain’t happening. It’s not happening anymore and go somewhere else. There’s got to be an alternative that’s built out.