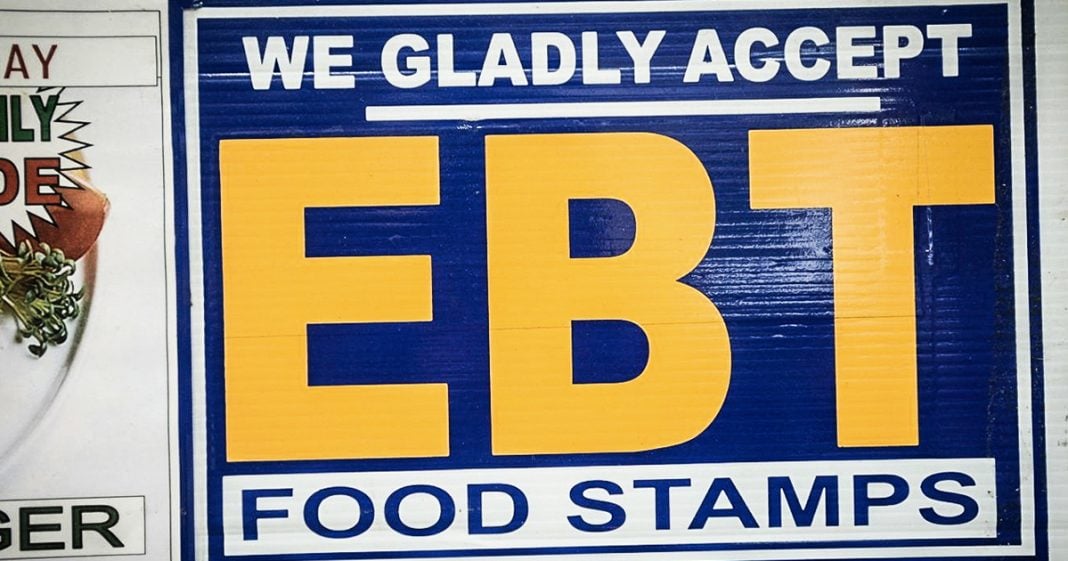 Thousands of stores across the country are having to turn away food stamp payments because they have been unable to renew their license to accept EBT payments due to the government shutdown. Benefits to recipients are still flowing, for now, but with fewer and fewer places able to accept these payments, we may have found ourselves on the cusp of a massive humanitarian crisis. Ring of Fire’s Farron Cousins discusses this.

Every day or two that this government shut down continues, we started getting more and more horror stories about how it’s affecting average people here in the United States. And here’s another one that just came out. According to new reporting, more than 2,500 stores across the United States who previously had accepted food stamps and ebt payments from people are now no longer able to accept those forms of payment because they’re not able to renew their license to accept those payments because the federal government remains shut down. Here’s the way this works. Uh, if you’re, you know, a gas station, if you’re a grocery store, if you sell food of any kind and you want to accept food stamps, you can’t just automatically take the food stamps, the ebt cards, whatever it is, you actually have to apply for a license to be a licensed, recognized, able to accept these forms of payments.

Grocer, because of the government shutdown with these agencies not working. The people who had these license, which expire every five year, uh, they’re not allowed or able to renew them right now, which means their license has lapsed and they cannot accept these forms of payment. And here’s why this is important. We have $39 million people in the United States today living off the snap program. Food stamps, ebt payments. There’s not exactly a whole lot of choice when it comes to where you can go and spend that money. Some of the people who have to rely on food stamps, they don’t have an automobile. They can’t just drive an extra 10 miles down the road to go to the next store that accepts these, you know, they, they have to walk, they have to take public transportation. Maybe there’s not another place in their area that accepts these. Now, according to the government, 99 percent of stores out there who accept ebt payments are still accepting them, but that number is going to shrink.

The longer the shutdown continues because every week that passes another license expires probably a lot more than just another one. We’re talking hundreds, potentially thousands more licensed will expire and people cannot renew them, so the longer this drags on the fewer places in this country that are going to be able to accept those forms of payment. And what happens in that situation obviously is are these people can’t get food. These people can’t buy groceries. These people cannot feed their families. What makes it even worse is that even though February payments have gone out, they actually went out earlier than expected. If the shutdown continues, they don’t know if they can continue making payments beyond that. In fact, several states, including Florida and California, two of the biggest in the country are actually warning food stamp recipients with their latest, uh, payments here. Hey, go easy on it.

Make sure you watch your money wisely because we don’t know when the next payment may be coming in. So these people who already don’t even have enough money to purchase food, now they’re being told, spend even less because we don’t know what the hell is going on with our completely dysfunctional government because president toddler is still having his temper tantrum over the border wall. So best of luck buying food folks, and hopefully that store in your neighborhood that you depend on to accept these forms of payment doesn’t have a license that’s up for renewal within the next couple of weeks. Otherwise you are completely screwed at this point.