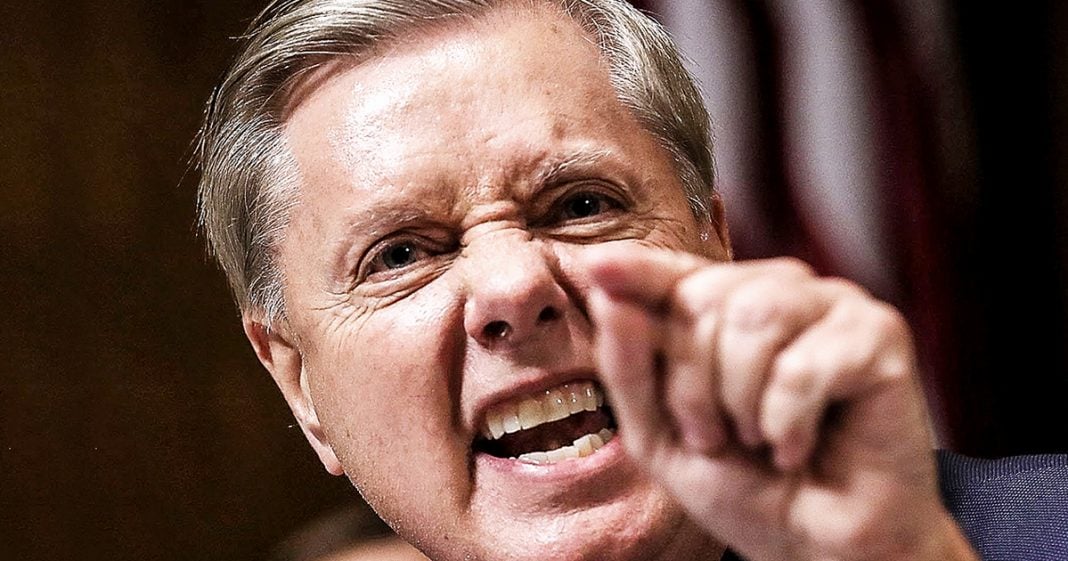 Lindsey Graham, the new chairman of the Senate Judiciary Committee, has announced that he, much like his counterparts in the House of Representatives, will waste no time calling for investigations into the President. The only problem is that Graham isn’t going after the current president, he wants to investigate Obama. He also announced that he’ll launch another investigation into Hillary’s emails, proving that he has no intention of actually governing. Ring of Fire’s Farron Cousins discusses this.

Well, ladies and gentlemen, Lindsey Graham, the Donald Trump suck up who used to be Donald Trump’s biggest enemy, uh, is now the chairman of the Senate Judiciary Committee, and late last week he was telling all of us exactly what he is going to do once he is fully in charge and the government’s going, uh, operational again, basically how he is going to run his Senate Judiciary Committee, like his counterparts in the House of Representatives. He is going to launch investigation after investigation into the president of the United States, except that he’s not going after the sitting president of the United States. Lindsey Graham has made it clear that he is going to go after Obama as chairman of the Senate Judiciary Committee because, Gosh Darn it, Lindsey Graham thinks there’s probably some malfeasance happening with that Pfizer warrant that they got on Carter page all those years ago. Lindsey Graham, in the midst of all the insanity happening with our government right now and our president and the investigations and all kinds of things wants to investigate Obama and it gets worse.

He also wants to open a new investigation into Hillary Clinton’s emails. You know the FBI’s handling of that, he thinks they bungled it. You know, she was guilty of something obviously in dammit Lindsey Graham is going to get to the bottom of it. If it takes him a hundred years, you know now to their credit, Democrats in the Senate have laughed at this because it is incredibly stupid idea because these two issues, I’ve actually been investigated to death and no wrongdoing was found by the way, so I don’t want to hear anybody left or right still out there talking about Hillary’s emails. Yeah, they’ve looked into it. They did everything they could to try to find something to pop her on and they couldn’t ask for Carter page. That was actually a pretty quick investigation because it turns out, yeah, that guy was a threat. That guy was a danger and that guy was working for other countries and we needed to find out what the hell he was doing.

All the results are already there. There is nothing additional that any more investigations are going to turn up on either one of these issues, but here’s the bigger issue here. Again, Democrats are laughing at this, you’ve got Dick Durbin who says, you know, and there might be some things he wants to look at with the, uh, Jimmy Carter Sheldon Whitehouse says, hey, let’s just go ahead and open up another Benghazi investigation too while we’re at it, looking back at the fond memories of yester year. But in reality, the story is what the hell is happening to Lindsey Graham? I mean, the guy has always been been a piece of crap. Don’t get me wrong about that. But in the early days of the Trump administration, this guy was the loudest voice out there along with his buddy John Mccain telling us what a danger Donald Trump was. Now he still voted with them almost all the time, but he was still out there saying one thing and doing another, but now he’s following through with what he’s saying, which is, Trump is a great guy and I’m going to do whatever that guy wants me to do.

He has become the typical donald Trump’s suck up spineless republican. And that’s what’s so weird about this. It’s predictable and there’s lots of people on social media saying, oh, they must have compromising information on Lindsey Graham. I don’t think that. I don’t want to buy into that. I think Lindsey Graham is just a spineless piece of crap who lost his buddy, who gave him a bit of a backbone in John Mccain and now he’s got nothing left, but hey, maybe Donald Trump can further my career. Maybe he’ll give me a cushy cabinet appointment because it’s unlikely I’ll win my next reelection because I’m such a horrible piece of crap. I think that’s what’s going through Lindsey Graham’s head. I don’t think there’s compromising information out there on him. I would love for there to be, but let’s not dive into conspiracy theories thinking that somebody got some kind of table. Lindsey Graham doing something with someone that he shouldn’t be doing, which is exactly what people in social media are suggesting. Let’s just keep it simple. Lindsey Graham sucks. Lindsey Graham is a horrible legislator, and Lindsey Graham wants to waste the Senate time for at least the next two years investigating things that have been investigated to Helen back and they couldn’t find a single instance of wrongdoing in either case.