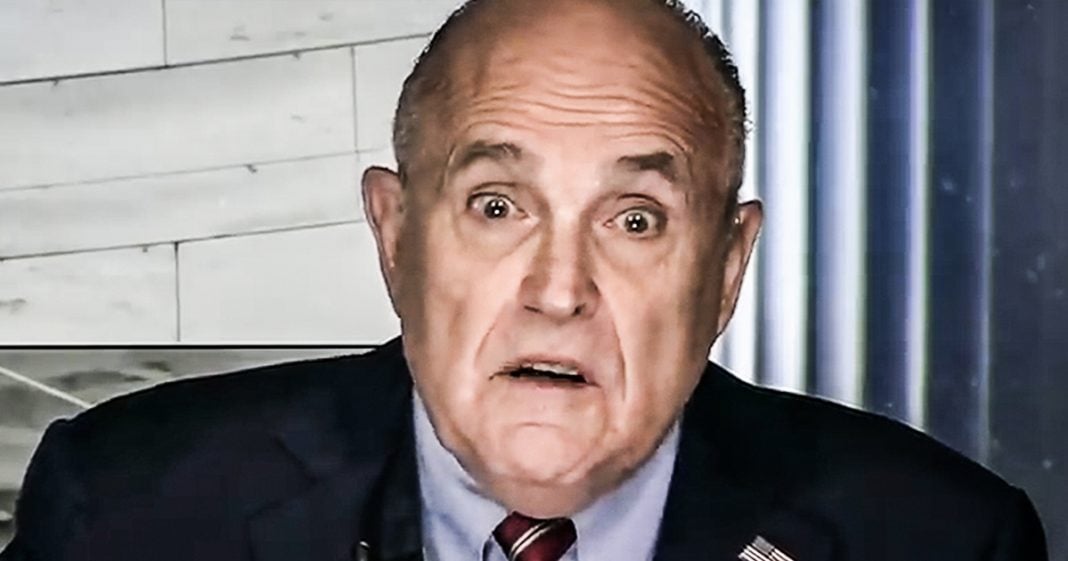 After a horrendous weekend on TV, Rudy Giuliani decided to sit down with The New Yorker for another interview, hoping that he wouldn’t screw up as bad as he did on the Sunday morning shows. He failed. Not only did he fail, but he accidentally admitted that there are tapes of Trump. Ring of Fire’s Farron Cousins explains the latest developments.

Rudy Giuliani has not had a good couple of days and in fact every time he speaks to a reporter or a TV host, he just seems to be making things worse for the president. See you on Sunday. Giuliani. Spoke to both the times and to, uh, NBC’s Meet the Press where he mentioned that Donald Trump’s Trump tower Moscow meetings or talks or negotiations or whatever it was. Yeah. Those weren’t on throughout Donald Trump’s entire presidential campaign contradicting what Trump himself and the rest of the administration had been saying for months. They said, no, this ended before he even ran for president. Then Giuliani goes out there. Tools, multiple different outlets that. No, no, no. They were, they were doing this the whole time. The entire time he was running for president, they were still trying to make this deal happen, which as many of us know, this deal is obviously the kind of centerpiece of potential collusion.

Maybe this was used as leverage by one party over the other. Who knows, but Giuliani says, yeah, they, they never stopped talking about that. And then later in the day he had to come out and say why? Yeah, I was, I was wrong about that. I, I was, I was speaking hypothetically, is what he said. He says this was hypothetical. So they were only hypothetically still talking about Trump tower all throughout the campaign. I don’t think that Giuliani knows what hypothetical means. Uh, but sure. Okay. Why not? Yeah, it was hypothetical. They weren’t actually talking, but they could have hypothetically been talking. Uh, and then he made things even worse than that, if you can imagine it. He spoke to the New Yorker in an interview published on Monday, uh, where he was talking about the Buzzfeed story with Michael Cohen. And he said, I knew from the start that this Koan story was bogus because I’ve heard all the tapes.

In fact, this is exactly, exactly what he says. Ah, I’ve been through all the tapes. I have been through all the techs. I have been through all the emails and I knew none existed. None existed. Being instances of Trump telling Cohen to lie. And then basically when the special counsel said that, just in case there are any others I might not know about, they probably went through others and found the same thing to which the reporter then asked, wait, what? What tapes have you gone through in Giuliani responds, I shouldn’t have said tapes. They allege there were texts and emails that corroborated that Cohen was saying that the president told him to lie. There were no texts, there were no emails on the president, never told him to lie. Reporter then follows up. So there were no tapes he listened to though Giuliani says no tapes.

Well, I have listened to tapes, but none of them concerned this. So there’s tapes but there’s not tapes. But there are tapes. But they don’t talk about this specific instance. Again, another big thing that we’ve been wondering about all of these investigations and all of the shady things that Cohen did on behalf of Donald Trump is whether or not Cohen actually recorded the conversations. Michael Cohen was a guy who liked to record things. We’ve heard a couple of the recording’s already and now Giuliani comes out and accidentally admits like, yeah, I’ve listened to all these tapes that, oh crap, they don’t exist, nevermind. Sorry, but they are real, but they’re not about this there about other things and Mueller has the tapes and he probably listened to them too. That’s a pretty big deal, right? I mean, this guy not only just admitted that what we’d all suspected is in fact true, but he also just kind of negated a lot of talking points from the administration and he is supposed to be the one out here representing Donald Trump and saving him from all of this nonsense.

Now, just a quick point about that buzz feed story just to you calm everybody’s nerves because right now you still have people saying no, no, no. Every, every bit of it’s true. Probably accept maybe like one thing. And then others who say, no, Buzzfeed’s totally busted on this. I’m just going to tell a quick story. During the Watergate era, when they were doing those investigations, Woodward Bernstein put out a story before the massive one came out, uh, alleging a lot of things that happen. They spoke to a source and they reported that the source had, uh, said some things in a testimony to a grand jury and they reported them. But then here’s the thing, the grand jury or a special prosecutor to come out and say, no, this isn’t true. This did not happen. So what order Bernstein, you know, this was before they got huge and famous.

They were crushed. They thought for certain that their entire Watergate thing was based on lies and that it wasn’t going to a bear. Any fruit here. Turns out the reason the special prosecutor’s office came out and debunked there story was because that information was never given during testimony that was given during another circumstance. So that was the only part of the story that was wrong. And when you look at Mueller’s offices, uh, you know, saying this story’s not true in some regards. It could be something as simple as that. It could be. Well, they said it came from texts and emails when in fact it came from tapes that would make their story technically factually inaccurate and that they did not gather that information in the manner in which Buzzfeed reported, so there is that. It could also mean that everything Buzzfeed said was an absolute lie.

We don’t know. We won’t know until the end of this investigation, but for the time being, it’s best to just understand that we don’t know what’s true from that, so put it aside for now. Nonetheless, the more Rudy Giuliani goes out there and talks the worst, he’s going to make things for president of the United States, and that is what we should be focusing on right now because over the last three days, Giuliani has either intentionally accidentally, perhaps he’s a double agent working for Trump, who knows at this point, but that guy has seriously slaughtered multiple talking points from this administration just because of his sheer stupidity.