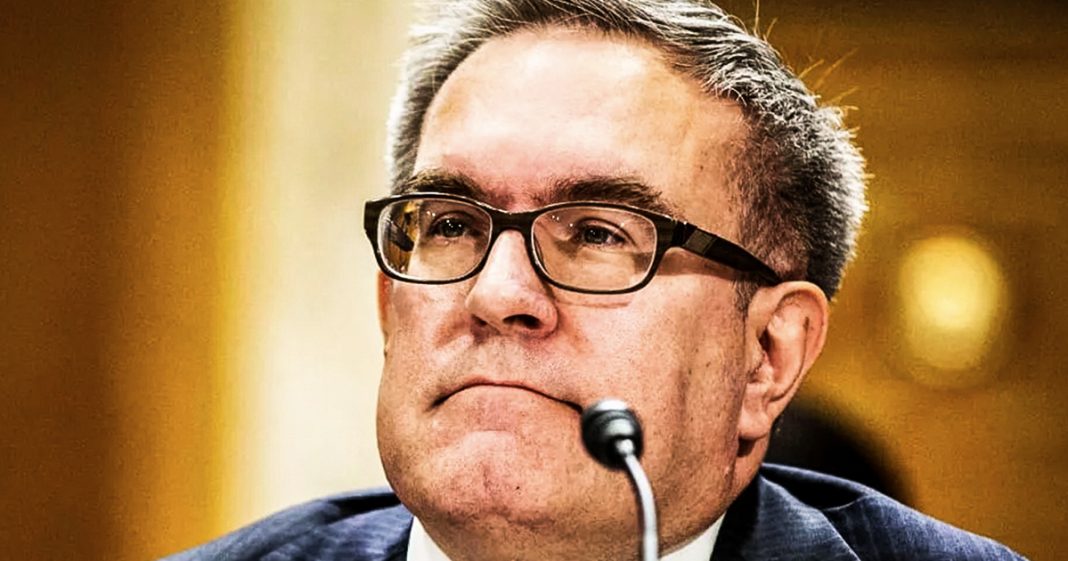 Enforcement actions at the EPA under Donald Trump have fallen to a 30-year low, showing that the priorities of this organization are no longer about protecting the environment – they are about protecting corporate interests. So the corporations who are dumping toxins that cause cancers, respiratory distress, and countless other ailments are getting away scot free while we struggle to survive. Ring of Fire’s Farron Cousins discusses this.

You know, there’s probably never been a better time in the entire history of the United States than right now to be a corporation. I India got a massive tax cut that saving millions of dollars every single year. You’ve paid off just about everybody that you need to pay off running this country and in return they have given you everything you could ever want. Now I’ve mentioned in the past how white collar criminal prosecutions under this current administration have absolutely dropped off the map. Well, it goes even further than that because in addition to not prosecuting regular white collar criminals, you know the kinds of on Wall Street who liked to steal our money and then pay a tiny fine to get out of it. But environmental enforcement under the trump administration, a prosecution has fallen 60 percent in just the last year. The EPA has had 60 percent fewer prosecutions last year in 2018.

Then they did the previous year in 2017, 72 percent fewer prosecutions. That occurred in 1988 when we had republicans running the show. But that was a different breed of Republican, wasn’t it? I mean, that was 30 years ago. Now we’ve got a different breed of republican and that’s what’s so terrifying. It’s not that environmental crimes have plummeted. No, they’re actually getting worse. They’re getting more creative, they’re getting more deceptive and their chemicals are getting more destructive for the human body. So that’s not why prosecutions have dropped off. Prosecutions have dropped off because the current incarnation of the Republican party running our government doesn’t believe that we should punish them. They don’t want these corporate polluters who also happen to be massive campaign spenders to ever feel like they’re trying to hurt their bottom line or make them pay a little bit money or gosh darn it, make them feel bad about giving entire communities cancer.

Those things happen in the United States. Literally, entire communities develop cancer from the toxins put out there by corporate America. And here we are today sitting with an EPA that doesn’t even want to prosecute him. Now, the reason I brought up the 19, 88 fact that, uh, we’re down 72 percent in prosecutions that we were back then is because here’s the thing. Even Reagan and Bush Sr admitted that climate change was a threat to the United States. George Hw Bush actually had his government craft a plan to figure out how to address this problem. He had the Pentagon look into it as a potential national security issue and they wanted to address this. They were not in office long enough to address it and maybe they wouldn’t have addressed it even if they had won that second term. But nonetheless, there was a time in this country when Republicans, when the issue of science on climate change wasn’t divisive.

It was a natural human issue that transcended party lines. Those days are gone and it’s only been 30 years. Folks. We have an entire political party whose platform insists that either climate changes in real or that there’s nothing we can do about it. So may as well just burn the planet down in one massive orgy of a party while we still have the time, but it didn’t use to be like this. There was a time when even Republicans took the issue of poisoning American citizens, poisoning the planet. They took that very seriously, but unfortunately the people who made up that party who made up the ideology there, they’ve either passed on to the great beyond or they’ve morphed people like Lindsay Graham and Mitch Mcconnell and to what we see today, sitting in Washington DC.