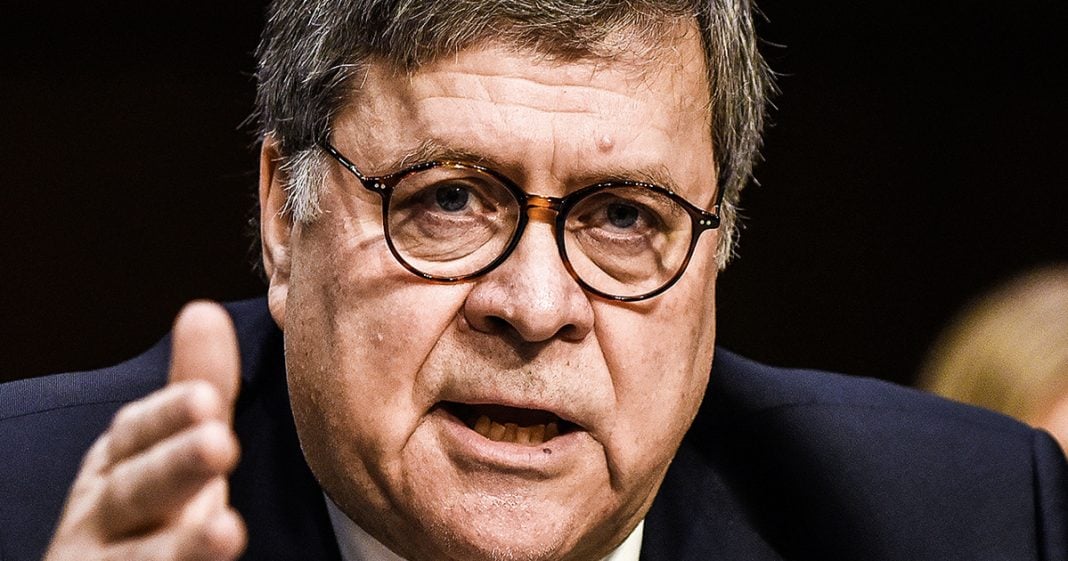 Another day, another millionaire joining the ranks of the Trump administration. Donald Trump’s pick to replace Attorney General Jeff Sessions, William Barr, has made millions of dollars working with some of the sleaziest corporations in America, giving us a clear picture of what his Justice Department will be like. We’re in for another round of pro-corporate, anti-consumer rules from the AG and at least two more years of corporate crimes going unpunished. Ring of Fire’s Farron Cousins discusses this.

You know, it’s easy to forget with all of the obvious insanity coming out of Washington dc right now that, uh, there’s still been confirmation hearings and we’re about to get a new attorney general here in the United States. William Barr will be the next attorney general of the United States, and it’s important to understand just who this guy actually is. Now, if you’re one of the people who tuned in to the confirmation hearings, you probably know he’s a guy who doesn’t necessarily want to protect Robert Muller. He doesn’t care if that investigation continues. He’s probably not going to stop Donald Trump if he wants to end the investigation, but that is really the least important thing about William Barr. Other stories have emerged showing that William Barr is probably not going to do anything at all to protect social issues. He’s not going to be good with LGBTQ issues. He’s not going to help with discrimination coming from corporations or anything like that.

And that is true and that is important. Here’s another important story that unfortunately has not been talked about. Very much. Truth out actually did a phenomenal job of laying out exactly how bad William Barr as attorney general is going to be for American consumers because just like so many other members of this Trump administration, well, you Barr is a multimillionaire, and where did he make his money representing and fighting on behalf of corporations. In fact, between the years 2009 and up to today actually will you Barr has been serving on the board of at least three different major corporations here in the United States, each of which have paid him millions of dollars. Time Warner, a dominion energy, Ziff capital. So this guy’s involved in everything. He’s involved in media making millions off that. He’s involved in oil production and fossil fuel extraction, making millions off that and capital, so he’s a good friend of Wall Street because he’s making millions over.

There are. These are just a few, but the bottom line is that this is not a guy who was ever going to look out for American consumers. We have already seen an under former attorney general jeff sessions that prosecutions from the doj against white collar criminals have absolutely plummeted, virtually nonexistent during the time that jeff sessions was in charge of the Department of Justice. That’s going to change when William Barrr comes in and not in a good way because it’s going to go from virtually nonexistent to completely non existent. This is a guy who owes his entire personal fortune to making sure that companies get to rip off. Consumers, get to rip off the federal government, get to do basically whatever the hell they want to do, and they have paid Barr. Again, millions to make sure that that happens. We have no reason whatsoever to think that Barr is somehow going to step into that office.

As attorney general of the United States and actually look out for American consumers, what we’re going to see is less enforcement, less prosecution, and in the rare event a corporation does have to be held accountable for what they’ve done. We’re going to see a reduction in the amount of fines that they have to pay. This is what Republicans have always wanted. For the United States, this is not just singularly a Donald Trump issue, this is a republican thing, and to an extent we’ve seen the Democratic Party engaging this as well. They don’t want to hold corporations accountable. They don’t want to prosecute them when they break the law because, hey, they may have a reelection coming up and they need the corporate money coming in and it’s hard for a corporate CEO to give you a lot of money for your campaign when you’ve just thrown him in jail. Right? So that’s why there’s no punishment. That’s why nothing bad ever happens. These people, when they scam consumers, put out products that they know are going to kill them or just steal every dime they’ve ever put into their retirement fund or their pension fund. Nobody goes to jail. Nobody ever really gets held accountable and as bad as that is with William Barr at the head of the DOJ, it’s about to get so much worse.