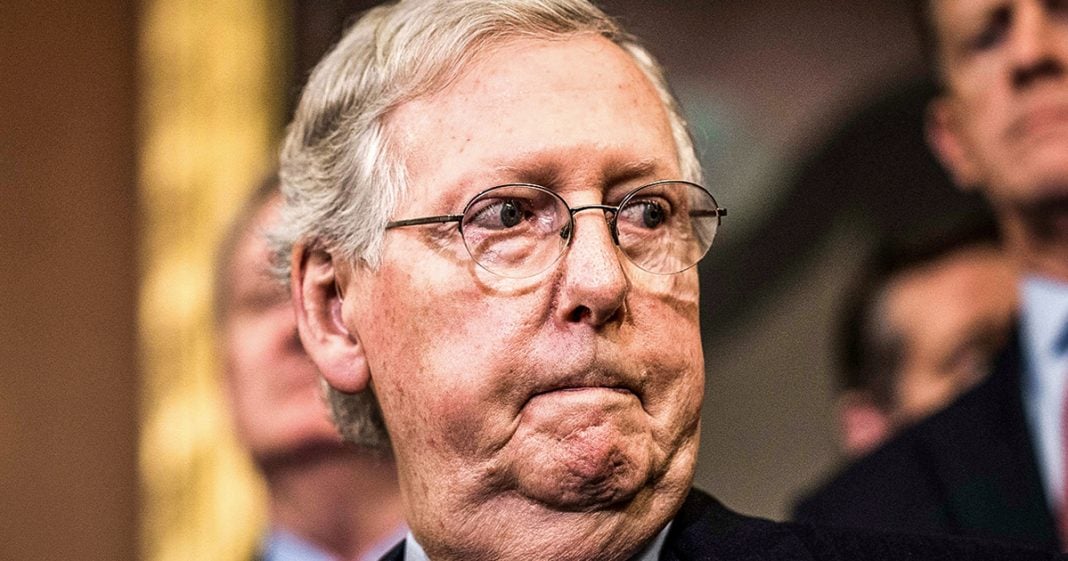 Mitch McConnell’s own constituents are fed up with his constant refusal to reopen the federal government, and through a series of small protests last week they let him know it. At this point, McConnell deserves as much of the blame for the shutdown as Donald Trump, and the country agrees. McConnell is in for a very rough reelection if he continues to put his loyalty to the President ahead of his loyalty to the country, as Ring of Fire’s Farron Cousins explains.

There’s no question that this is donald Trump’s government shutdown, and I know that he wants to say that the Democrats were the one who shut it down. It’s there, shutdown at the Pelosi shutdown, the shuberts shut down. Whatever clever Hashtag he wants to tweet out that day, but the American public doesn’t buy it. They understand that the fault lies with Trump and the Republican party. This is they’re shut down. Not the Democrats. Poll after poll after poll at this point has shown that, but here’s the thing. At this point of the government shutdown, it is no longer find enough just to say that it’s Trump. Shut down. At this point, Mitch McConnell deserves at least half the blame for it. This has officially become mostly Mitch McConnell’s. Shut down, and here’s why. On at least three different occasions at this point, it may have already changed since I’ve sat here talking to you, but three times Mitch McConnell has refused to even bring to the floor a bill that would reopen the federal government without border wall funding.

Three times Mitch McConnell had the chance to bring legislation to a vote that could have ended the shutdown and thrice he hath refused it. That’s telling you something. You’ve got bipartisan support. Not overwhelmingly, but there are some Republicans in the house who were willing to say, we’ve got to reopen the government. Things have to keep working. We have very real problems. We can’t even inspect our food right now. Air traffic controllers and TSA agents are being forced to work without getting paid for it. The governments facing massive law suits over that fact. We’re losing money as an economy. Government workers are turning to food kitchens, taking on second jobs, trying to pay their bills right now and during this shut down, something has to change. At least a few Republicans in the house understand that they voted with Democrats on these bills to reopen it, and I guarantee you if we had them in the Senate and they weren’t being blocked by Mitch McConnell, we’d see Republicans jumped ship and vote to reopen, but Mitch McConnell won’t do it.

Even in spite of the fact than last week. Federal workers, furloughed federal workers showed up at his office in Kentucky protesting, demanding that he at least let these bills come to a vote, the manning, that he just reopened the government and deal with the border wall situation later, or preferably not at all because the majority of people don’t even want it, but he wouldn’t do it. Mitch McConnell is up for reelection in 20 slash 20. By the way, Mitch McConnell has been serving in the Senate for 34 years. Thirty four years. This man is more powerful than Donald Trump. He has more sway. He has more pull. He has more authority at this point and there’s no better case for term limits for senators than Mitch McConnell himself. Thirty four years, he has been serving in that chamber for himself and that’s what his constituents were trying to tell us last week.

This isn’t about political parties. This isn’t about a fight. This is about Mitch McConnell looking out for Mitch McConnell, but I can promise you, Mitch, those constituents of years that showed up at your office last week, that was just a small minority of the people in your state that are pissed off at you over what you’re doing with the federal government right now and those are people that are going to remember this in 2020. You are facing the election of a lifetime and I wouldn’t be surprised if like so many other Republicans in 2018. You decide that you’ve screwed things up so badly and you turn tail and run and decide to retire. Rather than have to face your constituents in a 20 slash 20 reelection bid.