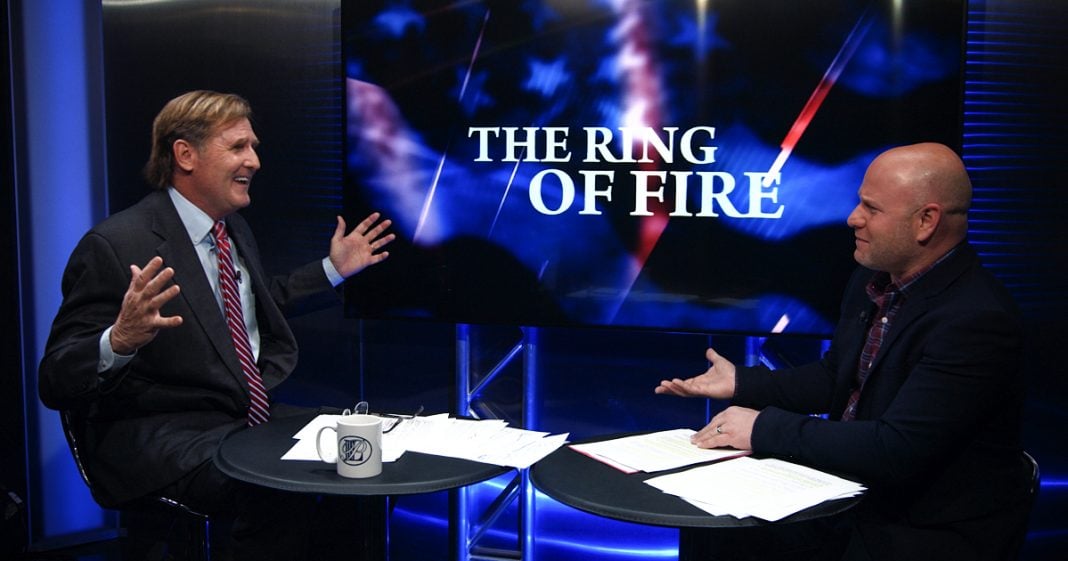 Last week, Beto O’Rourke live streamed his dental cleaning. While that was happening, The Daily Kos delivered twenty five THOUSAND roses to Nancy Pelosi. What the hell is wrong with Democrats? Where are the real leaders who aren’t creeping out this country? Ring of Fire’s Mike Papantonio and Farron Cousins attempt to answer those questions.

Mike Papantonio:             Okay. So what, what are the Democrats projecting here? I’m just curious. I mean, I’d love to look, what you are truly a little bit older millennial, but pretty much millennial and I want to know what is your reaction is to. As a late late baby boomer, I’m going, what the hell? But what, what’s your, what’s your take on it?

Farron Cousins:                  This was such a weird day. I mean, I understand Beto thinks that I’m going to use social media. I’m going to show my myself. I’m doing daily things like a normal human. There wasn’t anybody in this country no matter how much you like Beto, that wanted to look inside of his mouth and watch his dental cleaning. That was, that was crazy. That was crazy. But, and then, then Markos Moulitsas from Daily Cos comes in and says, all right, you think that was crazy? I’ve got $83,000 worth of roses.

Mike Papantonio:             Like you’re an idiot. Like you are truly an idiot. Okay? And he is. The guy, I mean, come on. Here’s his rationale. This is our time to be nice to each other. This is such conflict, this is our time. Okay. Be Nice. Take $83,000 on behalf of the Democrats, give it the food pantries. Give it to homeless shelters. Give it to school lunch programs.

Do something that means something other than a millionaire, Nancy Pelosi, giving it to Nancy, giving these things to Nancy Pelosi. She has to make the decision. This is so stupid, which she I don’t know, I guess to her judgment it’s a good move. She says, I can’t take all 83,000 of these roses.

Mike Papantonio:             So she sends him to the VA Hospital. Good for her. But I’m just, what does this project in a bigger picture, what does it project about the Democrats? I mean, what do you think? I mean, look, we beat on Republicans every single day. There’s not a day that goes by where you and I aren’t engaged and just absolutely beating Republicans to death. What about the Democrats? What does this say?

Farron Cousins:                  It says that we’ve let the party not only get hijacked by the centrist, but that some of these centrists like, they’re pretty nutty. I mean there’s no other way to say that. These are crazy actions. The dental cleaning, the 25,000 roses, normal people don’t do this, but what it shows, is that these are people, both Markos and Beto that are held in high regard.

Mike Papantonio:             Okay. That’s good to hear. Your take is The Daily Cos is just a projection of Wall Street Democrats. Third way Democrats.

Mike Papantonio:             Well yeah, he used to be with MSNBC, until he said something that offended that nut, Phil Griffin. And they asked him to leave. I forgot what it was.

Farron Cousins:                  But it is sad to see this evolution of people like Markos. I mean Pelosi’s not the worst human being in Congress, but she certainly is not, is not the greatest. She hasn’t been super effective. She already watered down as we had previously talked about that climate change committee as basically her first action after taking that gavel. I don’t see great big things coming from her and I, I don’t know that we will.

Mike Papantonio:             No she’s, it’s going to be. She has a wonderful opportunity to do something and what it’s going to do is digress into, we’re going to have Schiff. What’s his name, Schiff? Take over the idea and investigate this, investigate that. And at the end of all of that, the American public is going to say, wait, what are you all about? What have you done? What are you doing to move us ahead?

Working people ahead, what are you doing? They’re going to move on social issues and they’re gonna say, well, we did this on LGBT, we did this on whatever it may be, race. But then the question is going to come from Middle America. What did you do to improve my economic world? And it’s, it’s nothing.

Farron Cousins:                  And if, yeah, and if they don’t have an answer for that within the next two years, they’re going to look at a big defeat in 2020 and every poll out there, majority of Republicans and Democrats and everybody in between says they wanted the Green New Deal. They want Medicare For All. They want $15 minimum wage. They want expansion, this is bipartisan.

Mike Papantonio:             This is very specific about what they want. They want climate change under control and it’s across the board. Look, one thing that you got, you got to talk about. It’s overwhelming that they’re worried about immigration. Whether that’s logical or not, it’s out there. So what do you do about it? Okay. You say, okay, there’s no wall, but you’ve got to come up with something. You’ve got to come up with something where the Democrats don’t look like the party of nothing, which is what they have become the party of nothing.

Farron Cousins:                  But a lot of that also gets addressed because when you look at the real studies that show what’s happening down there, most of the unrest in Central America was caused by the United States.

Farron Cousins:                  Years ago, still doing it. But also climate change is what plays a major role in what’s happening in Central America because they’re losing farm land. They’ve got these horrid droughts. So we’ve also helped create those conditions that are making people flee through that. And so if the Democrats want to say we’re going to do something on immigration, but it’s not going to be a wall, what it’s going to be.

Mike Papantonio:             Right. But they have to talk about it Farron and it has to be somebody that can convey that. You saw the response on immigration, you saw Nancy Pelosi standing next to Schemer. They look like morons. I was, I was so embarrassed by, they look like morons. I mean I’m sitting there looking at tweetsville is going crazy. It’s going, what in the world are they thinking? You got Schumer that looks like he’s a mannequin that whose eyes blink every now and then and then you’ve got Nancy Pelosi. It looks so ridiculous. Okay. That adds to the story. Don’t you see?

Mike Papantonio:             The roses, the Beto getting, getting his teeth cleaned. The Schumer and Nancy show. There’s a collective that just is not projecting well for the Democrats. And unless you’re in some niche that you’re unable to say you can’t speak those words because you’ve become so tribal, you’ve stopped thinking, you’re just buying into what everybody’s giving you in your tweet or your Facebook or whatever.

You’ve stopped thinking. If you’re rationally thinking and you’re critically thinking you can’t help but say the overall picture is something we need to gain control of. There needs to be some forceful leadership up there. I don’t know what to tell you. I mean, I’m not a Democrat. I’m a Republican. I’m an independent, usually hugely progressive, independent. But as I’m looking at this, I’m, I’m able to stand outside and say, oh my God, really?

Farron Cousins:                  Well, and that’s the thing too, is, you know, you brought up social media. There are huge niche markets for people who think Bernie Sanders is Satan himself.

Farron Cousins:                  Right, and so there’s just on both sides, there are these people and they’ve, they’ve marketed it whether they believe it or not, what they’re saying, and I honestly believe most of them don’t.