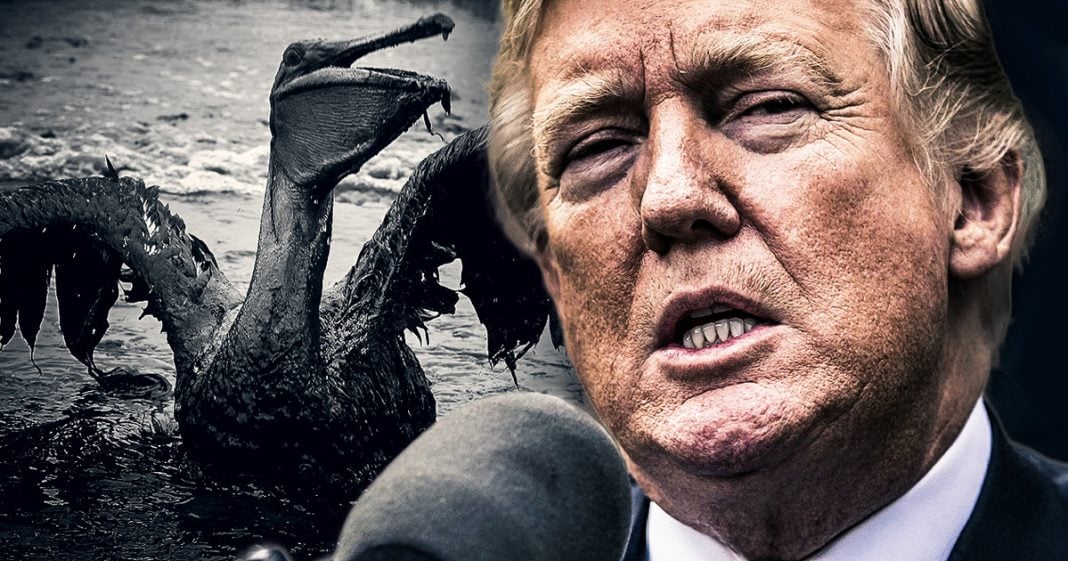 Even though the federal government is partially shut down and has been for weeks, new leases for offshore drilling projects are still being considered, reviewed, and approved in a move that shows where the priorities of this administration lie. The agency that handles these requests is part of the shutdown, but at least 40 employees are still working to approve leases, even as they halt all work on a proposed offshore wind project. Ring of Fire’s Farron Cousins explains what’s happening.

As the government shut down, continues to drag on, we have seen countless government agencies essentially ground to a halt. That includes the FDA who announced earlier this week that, hey, we’re done with food inspections. Last week it was, hey, we can’t do very many inspections, but this week it was now we’re officially out of money. None of the food and the US is going to be inspected not to be out dot over at the Department of the Interior. They’ve had to tell us this week that, hey, we don’t exactly have the money anymore because we’ve run out to conduct safety tests and compliance tests for some offshore drilling rigs here in the United States, in our waters in the Gulf of Mexico. That is, yeah, still kind of reeling from the 2010 bp oil disaster out there so we can’t test our food. We can’t make sure that another massive oil spills not right around the corner. So what can the government knew right now?

Apparently the answer to that is grant new offshore drilling leases to oil companies. Now this is actually a fairly complicated stories, so I’m going to do my best to explain it in its absolute simplest terms. What’s happening right now is the bureau of Ocean energy management a is operating with a skeleton crew. They’re part of the partial shutdown and as such they did have contingency plans in place to make sure that everything could keep operating, at least in its most basic form during the government shutdown. Trump came in, Trump administration had said, you know what to hell with the rest of your contingency plans. What we want you to focus on right now is approving new oil leases for offshore drilling in the Atlantic. Go ahead and just work on that. So, uh, they’ve banded together about 40 workers now into one single area who were in charge of trying to get these oil leases approved.

And the reason they’re trying to do it as quickly as possible is because part of the area that they’re not working on during this shut shutdown is a study, a report, um, that would have assessed the seismic risks and other risks associated with all of this offshore drilling in the Atlantic. They knew that that study was going to be damning for them and could put a halt to offshore drilling leases being issued. So now that they don’t have to complete that study, they’re trying to get as many leases out there going as many oil rigs running as they can because then those oil rigs would likely end up being grandfathered in when the government reopens this report comes out and says, hey, offshore drilling is going to kill us. No new leases, but the other leases already got approved during the shutdown. So that’s what’s happening right now with the bureau of Ocean Energy Management.

This is a threat to the United States. We’re at the threat of explosions these rigs. Because remember right now, nobody out there to go inspect and make sure it’s not gonna happen. Uh, and we know what faulty inspections do. That’s how we got the BP transaction explosion and oil spill in the Gulf of Mexico. The inspectors didn’t inspect. They let Trans Ocean do that themselves. They would fill out the forms and pencil. Then the regulators, uh, led by Chris Owens, I believe it was, would come back and fill in the answers in penn. They erase the pencil and write over it in pen. This was documented. We know that this happened and because there were no actual safety inspections, we ended up in disaster. St louis is going to happen out here in the atlantic right now. Nobody is looking over their shoulders and when nobody looks over the shoulders of corporations, they cut corners every single time. Every time there is no exception. They don’t follow the rules when they don’t think they have to. And now we’re just granting new leases left and right before we have to warn the public that, oh, all of this offshore drilling is going to create serious problems. That is the administration’s priority today. The government may be shut down, but the oil industry is still profiting hugely from the Trump administration.