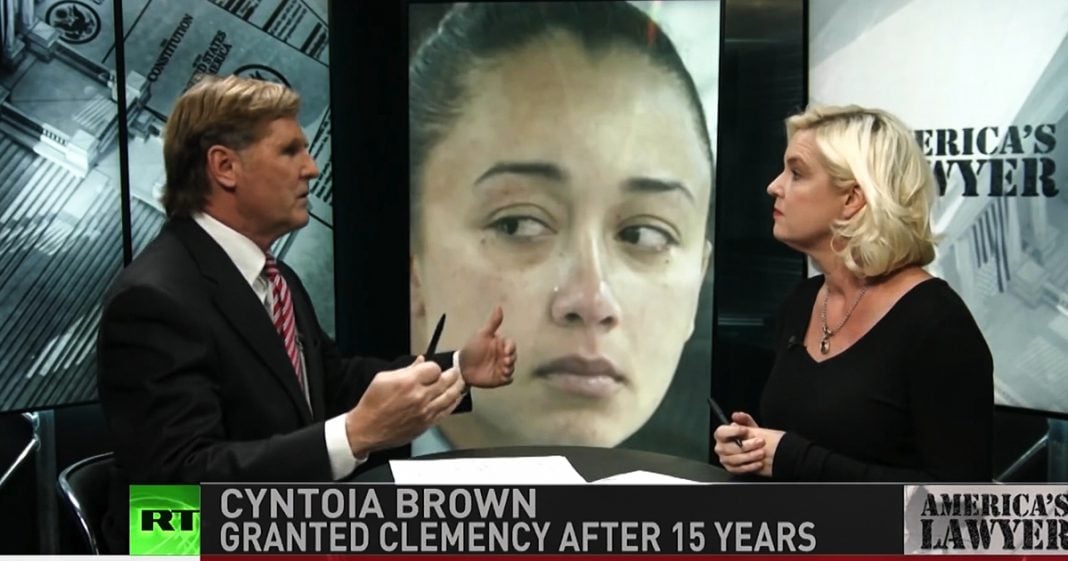 Via America’s Lawyer: Legal Journalist Mollye Barrows joins Mike Papantonio to talk about an unexpected act of Mercy in Tennessee with the Cyntoia Brown case.

Mike Papantonio:             Tennessee Governor Bill Haslam granted clemency to Cyntoia Brown, a woman’s serving life in prison for killing a man who paid her to have sex when she was 16 years old. Activists put Brown’s case in the media spotlight saying the teen was being exploited for sex at the time that the murder took place and many celebrities have picked up this cause. You know, this is a grab bag here.

I’ve got Mollye Barrows to talk about this. You followed, interesting thing about your career as an anchor in the news, is you have followed many stories like this. Most of the time they centered around police officers and that type of abuse. But as I’m looking at this case and you look at the story surrounding it. You got really a big divergence, you’re saying no, she was 16, but she didn’t have to murder the guy. It wasn’t like there was no need for the murder.

Mollye Barrows:                Well, it’s interesting. I think there has been a lot of support for this Governor’s decision. Tennessee Governor Bill Haslam, decided earlier this month that she deserved clemency and so she’ll get out August 7th. She’s already served 15 years. She was sentenced to life in prison for shooting this man to death. Forty three year old. Let’s see. He was Johnny Allen, an Asheville real estate agent. He paid her pimp to have sex with her. Picked her up at a fast food parking lot, took her back to his house.

She shot him, killed him, robbed him, took his gun as well as his wallet, and in fact the officer on the case investigated it, felt like she didn’t deserve clemency, but I think in light of the me too movement, when you have so many people saying, you know, women are being exploited, this case deserves another look at it. Not only what she sentenced to life in prison as a juvenile, which has Supreme Court ramifications now, but she also was being exploited for sex. She wouldn’t have been in that position to begin with. She was already the victim of a crime. So for her to commit this other crime, that’s what advocates are saying.

Mike Papantonio:             But in a sex trafficking case, the people we’re going after are the people who are responsible for the trafficking. In this situation, if she’s going to kill somebody, kill the pimp.

Mike Papantonio:             So I mean if you follow the rationale. Well she was being exploited. She was being exploited by the John, no question about it. And he deserved, I don’t know if he deserved being killed, but he deserves some element of punishment. The pimp is the person who put us, put her there and she had been with, she had been with the pimp a couple of years, been on the street a couple of years. I don’t, I can see why the public is split on this.

Mollye Barrows:                Yeah, and it’s interesting the reaction because she had a lot of celebrity support. I think it is one that is worthy of conversation regardless of where you fall in the decision to grant her clemency. Because I think there are so many things that are wrong with this situation. She’s certainly grateful to the Governor. She thanked him for his decision and said, thank you for having the faith in me to make this decision, but you know, it is a political one to a great extent.

Tennessee is a red state. The Republican Governor is, well he’s a Republican as well, but Nashville itself is blue. He had pressure from the city council there in Nashville as well as the Mayor to make this decision.

Mollye Barrows:                The parole board was even split. You have a six member board, two wanted her to say, time served already at 15 years. Two wanted her to not be eligible for parole for many more years and two said she shouldn’t be out at all.

Mike Papantonio:             Okay, something I see on the story that is interesting to me because we’ve talked about it before. The term is celebrity cool. Okay. Celebrity cool is somebody in Hollywood says, gee, this is terrible. Let me get involved. A lot of times they don’t really have all of the facts, but they feel like their opinion is so important that everybody’s simply is going to cower to that opinion.

That the way I see this story, if you’d take a look at the news articles on this, there is a huge split between the people who know what actually happened here and kind of the celebrity cool crowd who kinda parachutes in, gives their opinion, get a little publicity. It’s really more about their publicity than it is the victim most of the time. But what is your take? It’s a very strong split here in Nashville, isn’t it?

Mollye Barrows:                It is. And I think it goes to people who supported the bigger cause, not necessarily her case in particular, but they supported the bigger cause of teenagers shouldn’t be used and exploited in sex. And I think you see that at, for example, you have this new legislator that just came on in Tennessee, London Lamar. One of her first acts as a new representative in Tennessee legislature was to introduce a bill that’s based on Cyntoia Brown’s case.

Mollye Barrows:                In this case though, they’re basically saying in this law that would automatically protect the victim of the sex crime. So you’re being trafficked, it’s saying that because you’re already being used in prostitution, it almost excuses you, and that’s not exactly the right word, but the way the word of the law is, it’s presumed to be acting in self defense. If the person uses force intended to cause serious injury or death if they’re being used in prostitution.