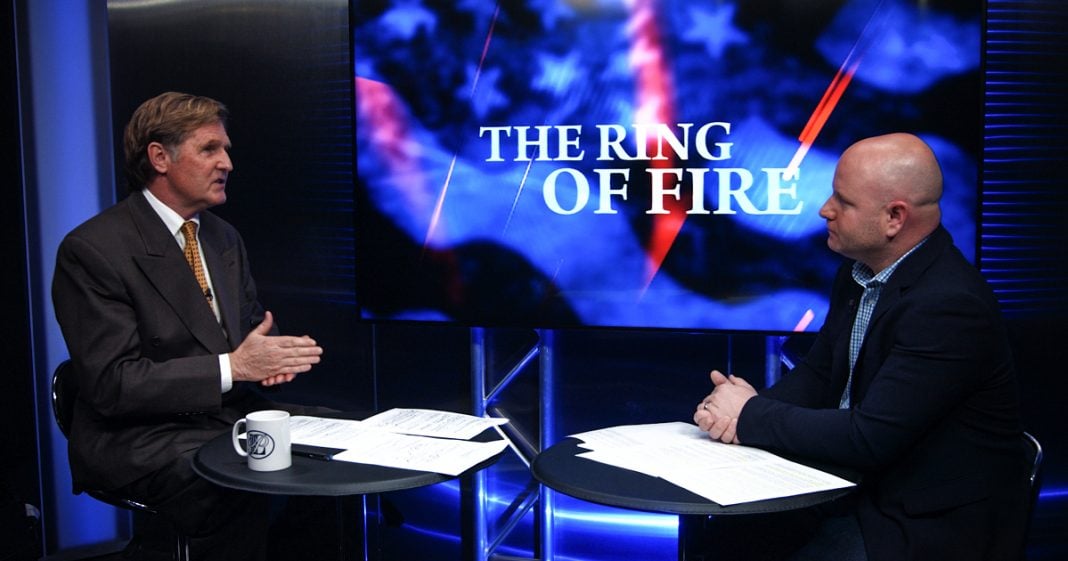 Major drugmakers in the US are planning MASSIVE price increases this year, just because they can. American consumers are about to get hit hard by these increases, forcing more people to choose whether or not their life-saving medications are even worth it. Ring of Fire’s Mike Papantonio and Farron Cousins discuss this issue.

Mike Papantonio:             Major drug makers in the US are planning massive price increases this year just because they can. American consumers are about to get hit hard by these increases, forcing more people to choose whether or not they’re life saving medications are even worth it or can they even afford it if they are worth it. So here again, I don’t know how many times you and I have done this story.

We did a, you did a story one time where just few weeks ago you were talking about, we were both talking about the idea, you take a $20,000 mark up is not exceptional for, for drugs. Then the numbers are startling. Everyday drugs that people have to stay alive. It’s not unusual to have a 10, 20, 30,000 percent markup on the drug.

Farron Cousins:                  Right, and there are some drugs here in the US where there is a 500,000 percent markup. Usually heart medications, things, you know, that heart patients have to have to survive.

Farron Cousins:                  And you nailed it in the opening there. They’re doing it just because they can. The cost of research and development has just been decreasing for them over the years because they outsource it, the government pays for most of it. The rest of it, they go and buy from colleges and universities where they’re already…

Mike Papantonio:             The R and D argument is nonsense. You don’t need a 30,000 percent markup on something like a heart medicine because of R and D. You need it because you need to buy advertising on MSNBC. Every night where there’s what? If you watch an hour show, you’re going to see five pharmaceutical advertisements. Okay, so all of a sudden Trump to his credit said, you know, this isn’t right. Trump says we should be able to negotiate with the pharmaceutical industry.

Farron Cousins:                  Right and you know the largest purchasers of pharmaceuticals here in the United States are Medicare and Medicaid and we, the taxpayers pay for that. We can’t negotiate that as a government? And then you look at places like Canada, they can pay markups of between one and 2000 percent. It still makes those drugs incredibly affordable. You don’t have people going into, you know, pharmacy bankruptcy up their. Pharmaceutical companies still getting in a 2000 percent profit off of selling a pill. Everybody wins. It’s still price gouging to an extent.

Mike Papantonio:             How about this? I did, I was in Holland taking depositions in, in the Pradaxa case that we handled nationally. That was a blood, it was a blood. It was designed to help take the blood and make it thinner to where people don’t have clots. If you have AFib or something like that. People would take Pradaxa to avoid AFib. So I’ve got one of their people on the, you know, on cross examination in deposition.

And I asked him straight out, I said, now, wait, let me get this right. This pill in America, I don’t remember exactly what the number is, but this pill in America cost $25. But in Germany the pill cost $3. Why? Why is that? And the man honestly said, because we can, because we can. Because you’ve got people like Cory Booker going to run for president, got better, keep your eye on this guy. Cory Booker says, you know, Cory Booker had a chance to change all this. That he had the, they had the Democrats had the votes to change it.

They could have put regulations right on top of the pharmaceutical industry and said, if you’re going to sell to the government, you’re going to have to negotiate. Cory Booker destroyed that. He’s the guy that rallied votes to destroy that legislation. So we’d like to think, well, no, it was just Republicans doing that. No, it’s Democrats too.

Mike Papantonio:             Bayer. Let’s call out names. Bayer wants, you know, five percent every year. Novartis wants 14 percent. You know, Pfizer, they, they want 14 to 20 percent. So all of a sudden, here’s what they’re saying. Their statement about this is that gee whiz, we didn’t do anything in 2018 and because Trump asked us not to, but we’re going to ask for it now. There’s no need for it. There’s absolutely, they survived. They made more money than they could spend in 2018, but they want to make more in 2019 simply because they can.

Farron Cousins:                  Right. Yeah, and that’s exactly what they’re saying is, oh, well we didn’t raise prices on you last year as much as we wanted to. You know, Pfizer did say, you know, the president tweeted at us, we backed off and decided, well, we’ll just push it six months down the road because right now what’s happening? Government’s shutdown. Everything is chaos. We got a new congress. Nobody could do anything. Eight hundred thousand furloughed workers. Nobody’s paying attention to this. Nobody’s paying attention to Big Pharma right now.

Mike Papantonio:             You’re going to see a lot of this right now during the shutdown. You’re going to see the oil industry come in, which we’re going to talk about in a minute. Pharmaceutical industry, you name it, all of the bottom feeders are coming in to, to take as much as they can from the American consumer While all this chaos is taking place.