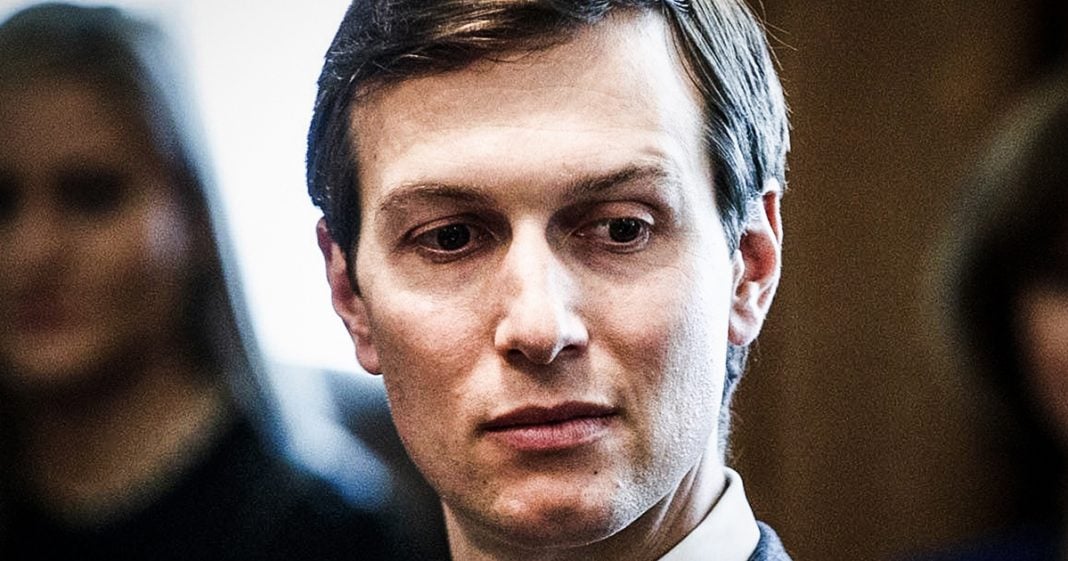 Donald Trump may be getting too much credit for being a lousy president, and perhaps some of the blame/credit should be going to Jared Kushner. According to a new book by former New Jersey Governor Chris Christie, Jared Kushner is the one who told Trump to fire Comey and Flynn, and Kushner can also be traced back to nearly all of the sketchy meetings that took place that are now the focus of investigations. Is Kushner accidentally sabotaging the administration from the inside? Ring of Fire’s Farron Cousins examines this claim.

Former New Jersey governor and also former Donald Trump champ, a transition team chairman, Chris Christie has a new book coming out January 29th called let me finish. And The Guardian, uh, obtained a copy of this book. And in the book, Chris Christie has a lot of really nasty things to say about jared Kushner, but when you distill it all down, everything that he’s saying about Kushner or I won’t get into specifics in a moment, he essentially paints the picture of somebody who is so incompetent and so stupid that he is somehow managing to sabotage the entire Trump administration from the inside. And here’s what I mean. According to Christie, what he has written in this book, it was Kushner who suggested that Trump fire Comey and fire a flynn during the campaign. Because if he did that, it would force people to stop asking questions about Russia, you know, Fire Flynn.

And that kind of gets people thinking that, oh, there wasn’t a connection at all. And then fire Comey and that’s going to kill your investigation. Uh, that is what Chris Christie alleges. Jared Kushner told the president, the president said, Ed’s good idea, Jair, let’s do that. Obviously didn’t work out so well for the president in fact made things a hell of a lot worse because jared Kushner urging the president to fire James Comey is pretty much one of the biggest obstruction of justice charges that Robert Mueller is actually looking into. So good job there. Jared, your stupidity may have gotten your father in law, uh, committing an impeachable offense. Not that he hasn’t already committed some that we do know about, but yeah, that was [inaudible] doing Kushner also is the one who got Steve Bannon to fire Chris Christie so that Chris Christie could not end up taking a spot in the administration where he obviously would have overruled and pretty much tried to force out.

And Jared Kushner. Um, but here’s the thing. According to Chris Christie, jared Kushner, so as an ax to grind against Christy because Christie is the guy back when he was a US attorney who actually put Kushner’s father in jail for tax evasion, illegal campaign donations and witness tampering. Although Christie was allowed to go light on him, so in spite of those three felonies, dude only serve two years in prison, a normal human being would have spent probably 10 to 20 years in prison, but Kushner’s daddy only got two years for being a complete liar, fraud and a horrible human being. So jared still mad about that. You put daddy in jail, you put my financial future in jeopardy, so I’m going to ruin your life, Chris Christie. At least that’s what Chris Christie seems to think. Now, here’s the thing. I don’t know how much stock I put into what Chris is saying here.

The guy’s a jackass. He is also a liar and a bully, so I don’t know if what he’s saying here is truthful or not, but what we do know is the jared Kushner is a moron. He has been advising the president, and more importantly, Kushner has also been involved in pretty much every single thing that’s gone wrong for this administration. Kushner is at the heart of the Mueller investigation as he was in that Trump tower meeting with an Italian resonance Kaiya. Kushner is the guy who worked with Erik prince from black water to set up those little meetings with officials from Qatar and the UAE during the campaign, so he may have even colluded with other foreign countries. Yeah. Kushner is at the heart of all of it. Not because he’s a good businessman, but because he’s dumb as hell and that very stupidity may sink this entire administration.