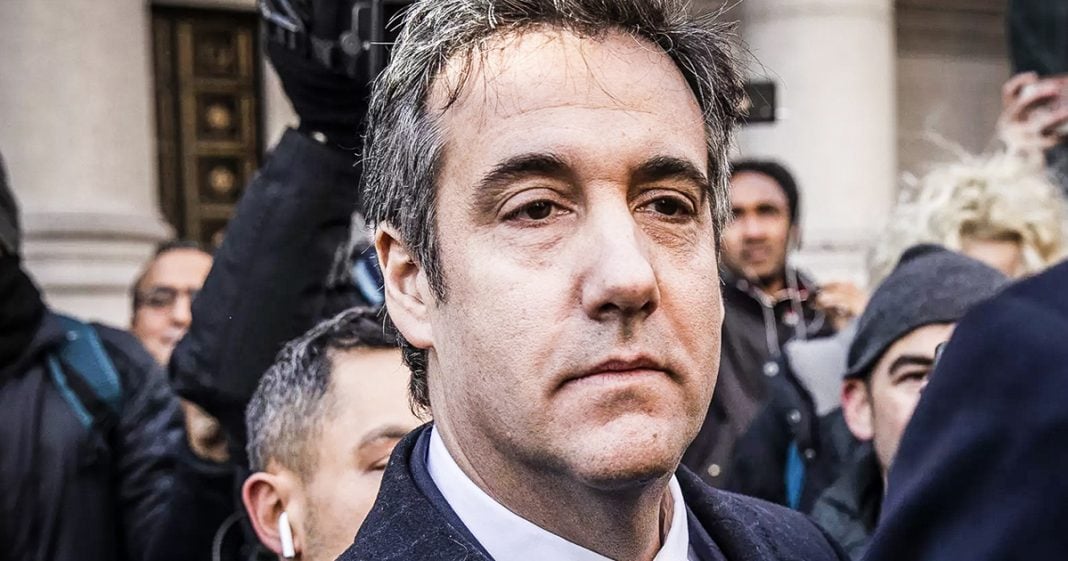 A bombshell new report claims that Donald Trump attempted to obstruct justice by having Michael Cohen lie under oath during a Congressional testimony about the Trump Tower Moscow project. Trump is freaking out on Twitter today as a result of this news, and given the fact that the Special Counsel’s office has texts, emails, and multiple witnesses, it’ll be nearly impossible for Trump to weasel his way out of this one. Ring of Fire’s Farron Cousins discusses this.

So obviously the biggest news in the country right now, the story that everybody is talking about is the Buzzfeed story, saying that Michael Cohen was instructed to lie to Congress about the Trump tower Moscow project at the request of Donald Trump himself. Now obviously if this story is accurate, this is a huge deal and not necessarily just because, oh, it’s Trump tower Moscow, right? The real issue here is that if Donald Trump did order Michael Cohen to lie to Congress, then that’s actually three separate felonies all rolled into one. So that in itself is a big deal. But here’s the thing, let’s go into some of the specifics here. According to text messages, company emails and other various documents that have been obtained by the Special Prosecutor, Robert Mueller’s office, they have enough evidence. Oh, including multiple witnesses from the Trump organization who have all corroborated the story separately. Uh, Michael Cohen was told by Donald Trump to go to congress shortly after the election and lie to them about when the talks for the Trump tower, Moscow project actually ended.

As we know now, the talks for Trump tower Moscow actually continued well beyond the presidential campaign, but Trump told Cohen to tell them that it ended long before the campaign, and if you recall a few months ago, uh, when Robert Mueller said, hey, Michael Cohen lied to Congress, this is what that lie was. That’s what he knows. Now, Michael Cohen is also coming forward. He’s going to be testifying in front of Congress, uh, the house on February seventh. So in just a few weeks we’re going to hear from him himself whether or not this story is accurate. And of course that also depends on whether or not we can believe Michael Cohen. After all, he did lie to Congress. Once that Donald Trump’s request, he may be willing to lie to Congress again to save his own butt. But at this point, Michael Cohen’s got nothing to fear. I mean, he knows he’s got his prison sentence.

He knows he’s going away and there’s nothing he can do to fix that is also nothing else that he can do at the moment that would increase his prison sentence. His fate is sealed. All he has left to do is to flip on the president and roll over and give them every piece of information that they need to impeach him, which honestly at this point I believe is exactly what’s going to happen. In fact, we might see the wheels of impeachment begin moving shortly after Michael Cohen’s February seventh testimony if he corroborates this particular buzzfeed story, but here’s the thing, impeachment does not mean removal from office. The Senate does not even come close to having enough people willing to remove the president from office in order for that to happen, but the house could impeach him. The house could vote on articles of impeachment past them, and therefore the president at that point, much like Bill Clinton was in the nineties, is impeached, just not removed from office.

What would happen in that particular situation then? If the Senate doesn’t vote to remove or convict, Trump just stays in office as an impeached president. How’s that gonna play out in 2020? You know, how are Republicans going to feel about having a nominee who was impeached for obstruction of justice, perjury, witness tampering, a bedding perjury? All kinds of things that just emerged from this one particular story that would be a scandal plagued nominee who would be ripe for a primary challenger to come in and get him off the ticket or Republicans in the Senate could, and this is the longest shot that I don’t think has a chance of happening, could determine that Trump is far too toxic to have at the top of a 2020 tickets and so maybe you wouldn’t get enough, you know, 15 I think maybe to flip a and vote to convict and removed from office, and then you end up with president pence who may not have the same baggage as Trump will wait until the final molar report comes out. To be able to make that determination. Pence is also not a fighter like Trump, which attracted a lot of the fragile, a masculine people in this country and so he doesn’t stand a very good chance of even being able to win an election on his own. Bottom line is this. This is bad for Trump, but it doesn’t mean that one that collusion did happen, or two, that he’s going to be removed from office, but what it means is that his fight to stay in office in 2020 just became nearly impossible.