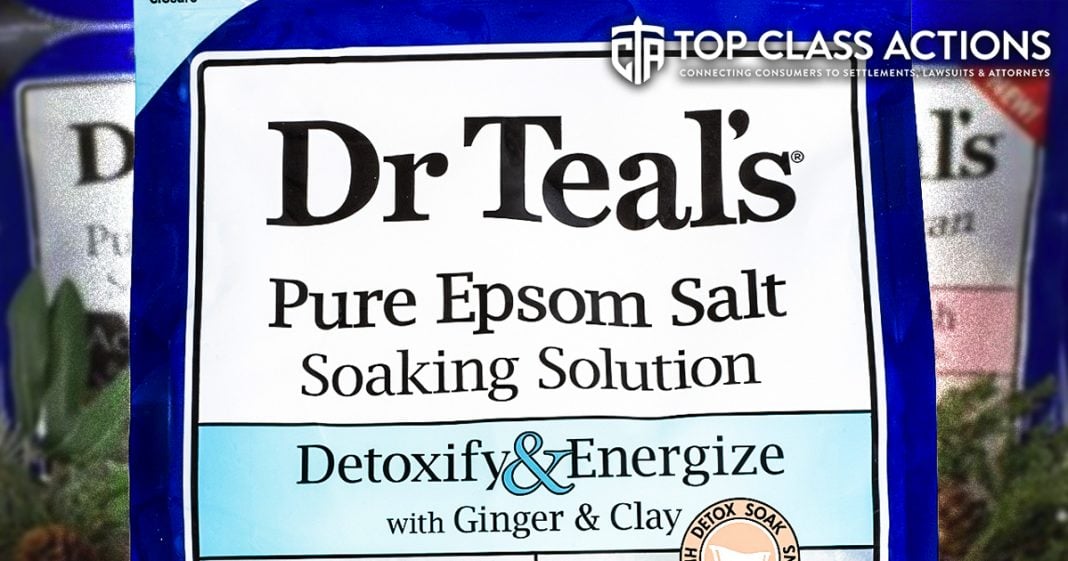 A class action lawsuit alleges that Dr. Teal’s Epsom Salts do not produce any of the advertised health benefits. Plaintiff Daniel Okoe says he purchased a three pound bag of Dr. Teal’s Pure Epsom Salt Soaking Solution, Detoxify & Energize with Ginger & Clay on Amazon for $4.87. The Dr. Teal’s Epsom Salts class action states that Okoe purchased the product at least in part to receive the health benefits advertised on the label. However, the plaintiff says he discovered after he purchased the product that the Epsom Salts did not provide the advertised benefits.  Ring of Fire’s Farron Cousins discusses this issue with Scott Hardy from Top Class Actions.

Farron Cousins:                  For quite literally hundreds of years, Epsom salts has been sold to the public all around the world as some kind of cure for aches, pains, maybe even detoxifying the body. Whatever your ailment is, Epsom salts can probably help you out or so we’ve been told again for hundreds of years as a population. Well, according to a new class action lawsuit, all of that is completely false. The old wives tales about Epsom salts curing your ills are completely untrue and a lot of the Epsom salts out there today are just trying to take your money and not deliver on the promises they make on the package.

Joining me now to talk about this is Scott Hardy from topclassactions.com. So Scott, I grew up hearing my grandmother, who still says it to this day, my mother says it to this day, Epsom salts, you got a problem. These things are most likely going to fix it. Just go fill up the tub, lay in there with it, with the Epsom salts, you’re going to be just fine. Really not the case is it, at least according to this new lawsuit?

Scott Hardy:                          No, it surprised me actually when I was going through the the lawsuits and took a look at this class action because I have a bag of this exact Dr. Teal’s sitting in my bathroom right now waiting for an Epsom salt bath because my trainers have said at the gym, hey Scott, when you’re sore, I’m 43 now so my muscles don’t go ahead and recover like they use to. If you’re sore and you got your bad joints, just take that hot bath as hot as possible.

They always talk about hot as possible, hot as you can stand. Toss them Epsom salts in there and man, it’ll go ahead and kick you right up and make you feel better, and I’ve done that and it’s helped. I’ve said, man, this does work. That’s why I’ve got more Epsom salts there. I never actually checked into the science of it, which is bad on me. This is kind of what we do, right? We might dig into these issues and see if there’s science behind it, but as you said, grandma said it was good.

My parents said it was good. My trainers say it was good, so why would I go ahead and not believe what they’ve got, these Dr. Teal’s Epsom salts out there that would work and it turns out that what actually helps you out is just the hot bath itself, not so much the Epsom salts.

The tea is going to detoxify you. Well, it turns out that’s not actually a thing. That’s not a thing that actually happens unless you’re dealing with a human body that’s going through, you know, alcohol or drug overdose. You can detoxify that, but just going in there and saying, I’m getting rid of the toxins out of my body, that’s scientifically not a thing. Right?

Scott Hardy:                          Right, right. That was, that was funny because the last time I was in the store just a week or two ago and bought more Epsom salts because hey, you know, I did feel better afterwards and I saw the Epsom salts. There are definitely, I thought it was just, you know, you get Epsom salts and you put in the bath, but no, they have ones with lavender now. They have these with the ginger and clay and I saw that detoxifying part and I went, huh?

The class action part of my mind went, oh boy, this should be interesting, but I, I didn’t actually process it and write a note or send a note to any of the lawyers we work with and say hey guys, dig into this because it turns out they already have and now we’ve got this covered. But yeah, I thought the same thing and you know, I just, I got some lavender Epsom salt fizzing bath bombs for my wife.

So after she’s working out she can just take that relaxing bath and it’s sad but you know, you sure will smell better after taking these, these fancy Epsom salt baths. But I think it’s, it’s interesting that the science is pointing to no, don’t spend a lot of time, you know, put in your oils in there to smell great, but, don’t think that any of these Epsom salts or the ginger or the clay that are added to the Epsom salts are actually giving you any basis to feel better.

And as you mentioned, the detoxifying part, I don’t know how it actually does that by sitting in a bathtub since, as you said, you’ve got to go ahead and absorb these things, take in water, and have your bloodstream detoxify you through things like your liver and your kidneys and all that kind of good stuff. But the bathtub is not a magic detoxifier. We’re not in the wild west where someone gives you a magic tub and you’re detoxified.

As long as the company lets you know that that is all it’s going to do, it’s going to be a placebo. It’s going to make smell nice. Might help you relax a bit, but we’re not pulling toxins out of your body. And that’s really what’s at issue here, isn’t it?

Scott Hardy:                          Exactly. Because you know, I look back now and when I first bought Epsom salts months and months ago, after a hard workout, I got them from a drug store and the, it was a big bag and all it said were Epsom salts. Didn’t have any promises on it, didn’t sit there and say it will magically detoxify your body, your soul and make you a better person overall. It just said Epsom salts, put them in the bath. There you go. And that’s what you’re going to see. You’ll probably still getting these fancy clay and ginger, but it’ll just say clay, ginger, it won’t say magically makes your body a pure place. Not that they said that exactly, but.

Farron Cousins:                  Well, yeah and that’s, you know what, that’s what we need on these packages. You know, Epsom salts may smell nice. They change their labels to that and everything’s gonna be fine. And to be honest, probably not even going to hurt their sales if they were just honest with people on this. But if you’ve got, if you want more information on this, there is a link in the description of this video to find out everything about this particular class action.

If this is a product you have purchased, I advise you to go in there, or if you know somebody who uses this stuff, make sure you check out that link and while you’re there, subscribe to the Top Class Action newsletter to stay on top of all of these issues that are a vital importance to American consumers. Scott Hardy, topclassactions.com. Thank you for talking with us today.