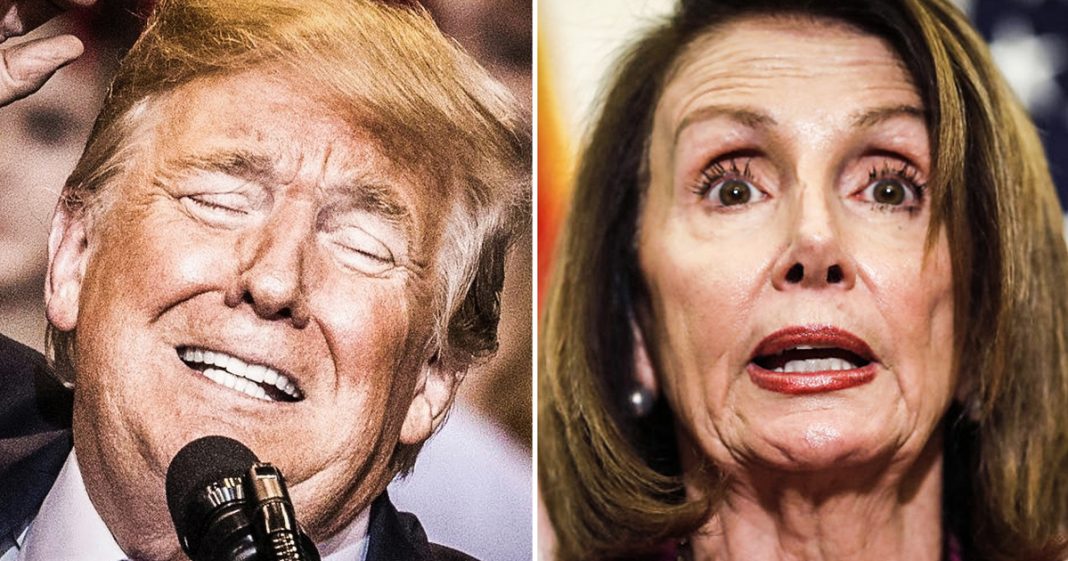 Pelosi wants to postpone Trump’s State of the Union Address. Trump has now cancelled Pelosi’s trip to visit troops overseas (a move that also threatened our national security.) The drama in Washington has reached a new high, or low, depending on how you look at it, and the American people are suffering as a result. Ring of Fire’s Farron Cousins discusses what’s happening in our reality show government today.

Well, we’re a closing out another week, still have a partial government shutdown, and now we have leaders of both parties basically trying to one up the other one on who can be the most petty and try to make the other one’s life a little more miserable. Started earlier this week when Nancy Pelosi sent the letter to Donald Trump that said, hey, let’s postpone your state of the Union until we can do it. When the government opened, it’s a security issue. You want all these security guards here, but they’re not being paid kind of crappy for you to do that. I agree 100 percent with Pelosi’s move. To be honest with you, I think this is great, but I also don’t think that she did it for any reason other than I’m going to stick it to them because I know this guy wants to be on TV and how he loves the attention and I’m going to take that away from him.

I also have no problem with that. I just think we need to be honest about what this is. It’s a petty move, but it’s the right move and sometimes yes, the petty thing can be the right thing. So Donald Trump in retaliation sent a letter to Nancy Pelosi yesterday and said, Hey Pelosi, I’m canceling your trip to go visit US troops overseas. How about that? Huh? Because the government shut down. It’s just not right for you to do that. So she wants to postpone his State of the Union. He’s canceled her formerly secret trip to go visit troops and an active war zone as if the two are somehow comparable. Like Nancy Pelosi was going to travel overseas, a meet with members of NATO, you know, and then go visit our troops in an active war zone. Something that actually does have to be kept top secret so that our enemies don’t know that she’s there and plan an attack.

Trump blows or cover, then cancels the trip and who gets who really got punished here, the troops, because they don’t get to meet a leader here in the United States. Let. Oh Nancy, you’re punished. You don’t get to go to that active war zone. I, I’m sure she’s probably slightly okay with that, although I’m sure she did want to meet with the troops and let them know that she appreciates what they’re doing for us. Unlike Donald Trump, she wasn’t trying to make it a publicity tour. She was trying to go out there and express her gratitude. Now I know I talked about the bickering and this is a lot of reality show type drama here, but again, I cannot express this enough. I do support what Pelosi is doing. Here she is standing your ground on the shut down. She is not giving into Donald Trump and yes, she is 100 percent right to cancel his state of the Union address.

In fact, I would be totally cool if she went ahead and just cancel the rest of his State of the Union addresses preemptively whether or not the government’s open. I don’t want to sit and watch this idiot talk to me for an hour from a podium that was once highly respected and lie to me the entire time. I have better things to do than waste my time on that. So yeah, totally cool with are canceling this, but at the same time we got to be grown ups here, or at least they do. I don’t know if I do, but they do, so we need them to kind of get together and Nancy Pelosi needs to make it clear to Donald Trump that you’re hurting American workers. You’re never going to get your funding for the wall, so you gotta just reopened the government and maybe we can talk about wall funding later on.

That is the only possible outcome in this situation and Donald Trump knows it, but if it weren’t for people like Ann Coulter, the idiots over at Fox News, he would have already caved and said, you know what? I can’t keep hurting American workers. We’re going to reopen the government and we’ll talk about wall funding later on. Eventually he’s going to do that and I can tell you exactly how his speech about reopening the government’s going to go. He’s going to say, I’m not going to allow the Democrats to continue harming American workers. The Democrats have done everything wrong, but I’m at at least try to make something right. We’re working on border wall funding, but for now I’m putting these 800 Americans back to work and getting them their paychecks today. Not Bad, right? Sounds exactly like something Donald Trump would say. There’s no truth to it whatsoever, but I have no doubt in my mind that that is how this government shut down situation is finally going to end.