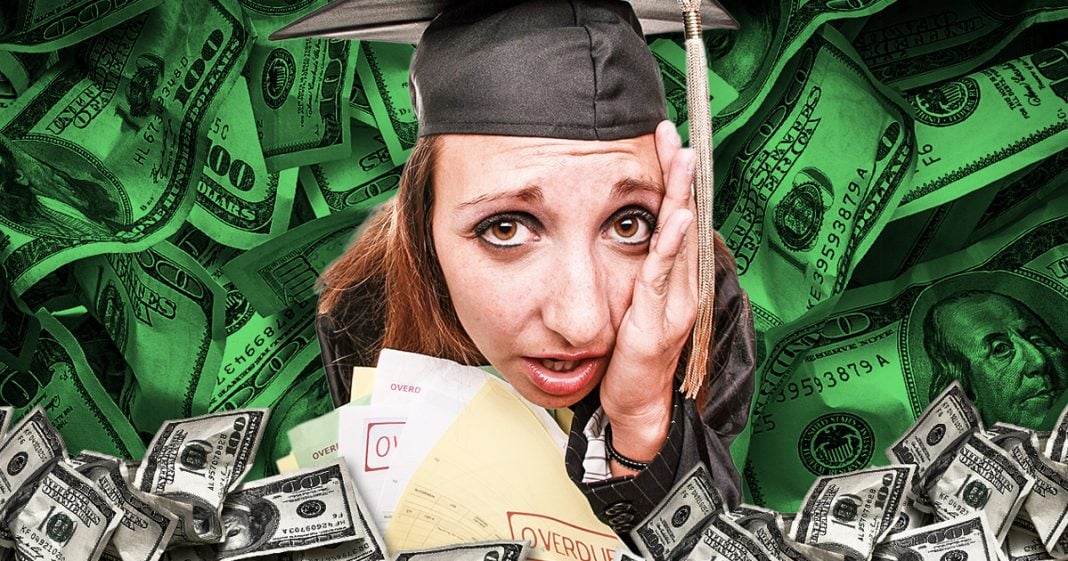 A new study shows that rising student loan debt is helping to prevent an entire generation from being able to buy a home. And the higher the debt goes up, the lower the rate of home ownership goes. This is a vicious cycle, and it is one that has impacts on all aspects of the US economy. We have hit a tipping point and if something is not done soon, we could be looking a major economic collapse in the very near future. Ring of Fire’s Farron Cousins discusses this.

According to a new study by the Federal Reserve, massive student loan debts across the country are actually causing a drop in home sales among people aged 24 to 32. To put it another way, student loan debt is so bad in the United States and it’s crushing so many people that we have an entire generation right now that is blaming student loan debt as the reason they can’t afford to buy a home. Now, here’s the thing, the Fed does point out that student loan debt is not the only factor keeping these people from buying a home. Although 20 percent of them say that it is the main factor, so 20 percent people age 24 to 32 are saying that 100 percent. The main reason I cannot buy a house is because of this massive crippling student loan debt that I have because college is so damn expensive. Loans are so outrageous right now that I’ve had to do this in order to try to get a better future for myself and now it’s actually screwing me over because I can’t even buy a house.

Now there’s obviously two things to talk about with the results of this study and it does show that for every extra thousand dollars in loan debt, the homeownership rate drops by one to two percent. Among that particular age group. That is a terrifying number. For every 1000 homeownership drops by two percent. That is a lot for not very much money. So let’s talk about the two issues here. First and foremost, student loan debt. It’s time to move to debt free college. Here in the United States we have to institute some kind of program of student loan debt forgiveness. Get these people, some of whom, yes, believe it or not, over the age of 60, still holding massive student loan debt. We’ve, we’ve got to get relief. There is no question about it and here’s why, and this is the second part. This is going to cause a massive collapse in the U. S economy.

That’s what happens with this generation. Not being able to afford housing, not being able to afford to go out and buy a house. What will happen, we will say a glut of houses on the market. When there is a glut, the prices of other properties go down. When the prices of other property goes down. We see all these companies, all these organizations. You know these people, independent contractors, wherever who buy the homes and flip them, they start going out of business. Contractors start going out of business because, well, there’s so many homes on the market. People aren’t building new homes is a ripple effect. The ripple effect that happens every time one particular group of people doesn’t have money to spend and it ripples all throughout the economy. That’s what we’re looking at here. We’re looking at another potential housing market crash, all because of student loan debt.

That is what the feds are trying to warn us about here. They actually mentioned this in their report. They talk about how this will ripple through the US economy, causing crashes and collapses all throughout it. If nothing is done about it, but they don’t come up with a plan to do something about it. They don’t say, Hey, you know what? Maybe let’s stop giving rich people more money and tax breaks and use that instead the pay off student loan debt because then what happens? Suddenly the people buried under massive amounts of debt have more money to spend and you know what they do with that. They go out and spend it spending increases. Economies rebound things get better. Homes get sold, new homes get built. That’s the way the US economy works, but the only way it will work is if you put more money into the pockets of the people who are actually out there doing the spending. Not Money in the pockets of the wealthy elite who want to go hide it off shore just because they can.